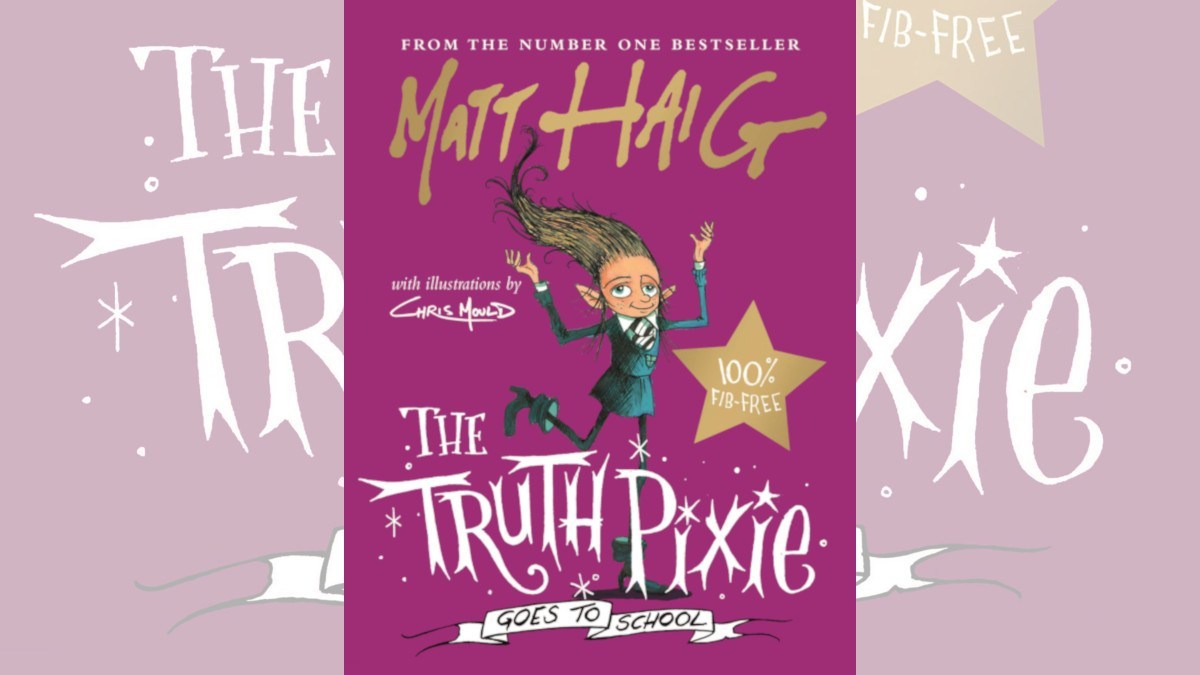 This Week’s Word Is “Pixie.”

We love a bit of Matt Haig in this house. The Humans is one of my all-time favorite books (reviewed here, long before I wrote for GeekDad) and his 3 Christmas books have brightened up the last 3 years holiday season. All three of them are an absolute joy. Possibly the best character in the Christmas books is the Truth Pixie, who can only tell the truth. This leads to hilarious consequences. Matt uses the Truth Pixie to examine the troublesome fact that whilst we tell our children not to lie, society probably wouldn’t function if we didn’t collectively gloss over the truth on a daily basis.

Last year the Truth Pixie got her own spin-off book, and this year she has another, The Truth Pixie Goes to School. As my children return to school this very Word Wednesday, I thought I’d devote this week’s column to the Truth Pixie.

Who is Matt Haig and Why do we need him?

As well as writing first-class fiction for all ages, Haig has also written two non-fiction books to help those who battle against the rigors of depression. In Reasons to Stay Alive, he talks about his life with depression and offers thoughts and observations to help others going through the same. Reasons to Stay Alive may well be one of the most quoted books on the internet; it forever seems to pop up on my feeds from all sorts of sources.

Haig has been in the news a lot recently. When Meghan Markle edited Vogue she included one his poems, citing it as a favorite of hers. The poem uses the F-word, a fact that a vocal section of the media used to try to castigate both Markel and Haig; apparently entirely missing the point of the poem and becoming hung-up on the sensibilities of language. They then double-downed on Haig when he used similar language to summarise the current global political situation. Many of his critics call him a “snowflake” for his liberal sensibilities and open discussion of depression, whilst failing to notice the irony of becoming extremely offended just because he sometimes uses the word f***.

Haig is unashamedly empathetic; a sensitive, articulate man, who cares deeply about our world and the people in it. He is not a somebody who will stand by while bullies do their work. His left-leaning politics and outspoken support of many ‘liberal’ types and his opposition to Brexit have brought him to the attention of the right-wing media who have tried to use attack-dog tactics to see him off. He will not be cowed; writing intelligently and entertainingly on Twitter, supporting his views and the views of those he agrees with. The world needs more Matt Haigs.

Which is all a little off-topic for a children’s book review – but goes some way to explain why his books are so vital and heartfelt.

What is The Truth Pixie Goes to School?

The book in many ways reminds me of longer Dr. Seuss books, though without the made-up words. The Truth Pixie books are short stories, made up of short 4 line rhymes (where lines 2 and 4 rhyme).

It’s a story about many things. Mostly about the difficulties of fitting in and the compromises we might make to do so. How it’s easy not to be true to yourself in order to gain acceptance, or how we might sideline a friend in order to appeal to an in-crowd. Something many of us did as children (and probably adults.) The Truth Pixies Goes to School examines the pitfalls of doing so.

“Don’t try to be something

You really are not.

Your one true self

Is the best thing you’ve got.”

As well as stating the importance of remaining true to yourself, the book looks at the nature of bullying and the reasons a bully might do what they do. The book also introduces another cursed pixie, one that can only lie. This fellow is far more popular than the Truth Pixie for he can tell people exactly what they want to hear.

Above all, though, The Truth Pixie Goes to School is about the importance of friendship. Standing by one another when things are tough and not allowing material things or other constraints come between you and the people that you love.

Why Read The Truth Pixie Goes To School?

This book is not a cure-all for school angst. It’s not going to solve the problems of anxiety or bullying, but it will help alleviate them for a time. It shows that there are other people who have had similar experiences and that it’s possible to come through them. It also offers a great deal of light-relief. It’s a funny book with fabulous illustrations by Chris Mould, making it even more engaging for younger readers.

It’s a glorious book to read aloud. I imagine it would be brilliant to read to a group of school children. Haig’s word choice and use of phrase is spot on. It has the classic cadence of a Suess book, and imparts a moral, as many of the longer Suess books do, but it does so without the surreality of a Suess creation, which I know grates for many readers.

I’m probably biased when it comes to Matt Haig’s writing, as I think he and I share a similar world view (though he can express it far more eloquently than I). The Truth Pixie books are filled with compassion, encourage our children to be more empathetic, and above all, stress the importance of being kind, friendly, and true to yourself.

If you enjoyed this review, do check out my other Word Wednesday columns.

If you’d like to pick up a copy of this book, do check out the Big Green Bookshop. A wonderful UK independent, that will ship to the US. I used to use Amazon links in my GeekDad posts, but after reading and reviewing The Warehouse, this now feels like an untenable position. I feel a bit of pillock for not thinking of this before; but then I guess that’s probably one of The Warehouse’s main points. We’re sleepwalking into traffic.

Do also check out the Big Green Bookshop’s “Buy a Book for a Stranger” initiative. I have a soft spot for this shop, as my Nan lived in Wood Green (home of the Big Green Bookshop)  for 92 years. Sadly, she passed on before I knew of its existence, so I never visited. It’s now moved to be internet only, so I never will, which makes me a little sad. You can follow their hugely entertaining Twitter feed. Oh, and you should probably follow Matt Haig too…

Tabletop Takes on Zombies and Dragons and Sharks (Oh, My!)