Ray: Gene Luen Yang is a highly talented writer who has done a good job picking up with where Jeff Lemire left off on The Terrifics, an offbeat team book, but in this Year of the Villain tie-in he’s been handed a plot he really can’t save in The Terrifics #19.

I’ve been pretty vocal about my feelings on Bizarro – he can be well-done when played for pathos and is best in small doses. This issue instead goes the opposite route and plays him for broad laughs for the whole issue. When we last left off, Luthor was giving Bizarro one of his trademark offers, and this issue shows exactly what’s been going on at Bizarro World.

That world’s version of Mr. Terrific, Mr. Terrible, has invented T-Globs, which are helping everyone and rendering Bizarro obsolete. It’s even making his caustic relationship with “Loiz” worse – although I don’t see how, since the last time we saw them they abandoned their son on Earth. We’ve had multiple Bizarros running around, and I can’t believe Scott Lobdell’s version is the more compelling one.

So Bizarro decides to destroy technology and stop Mr. Terrible from creating the T-Globs, traveling in time to attack him. He succeeds in breaking his skull and giving him a T-shaped head, but when he gets back his version of Dr. Magnus has created his own invention.

Bizarro as a luddite is a new take, and the issue is mostly just him attacking technology and failing miserably. Eventually, with Luthor’s help, they decide to head for Earth and continue their fight there. Mr. Terrific, meanwhile, is now independent from Stagg Industries and holding a party, but his relationship with Paula looks to be on the rocks as she plans to head back to her own world. The segments with the real characters are very good, but they’re soon interrupted by the Bizarro versions of themselves. Trying to parse backwards speak for a whole issue is irksome and overall this plot just doesn’t let Yang shine with the dialogue like he usually does. 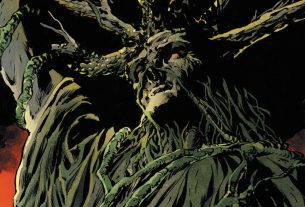