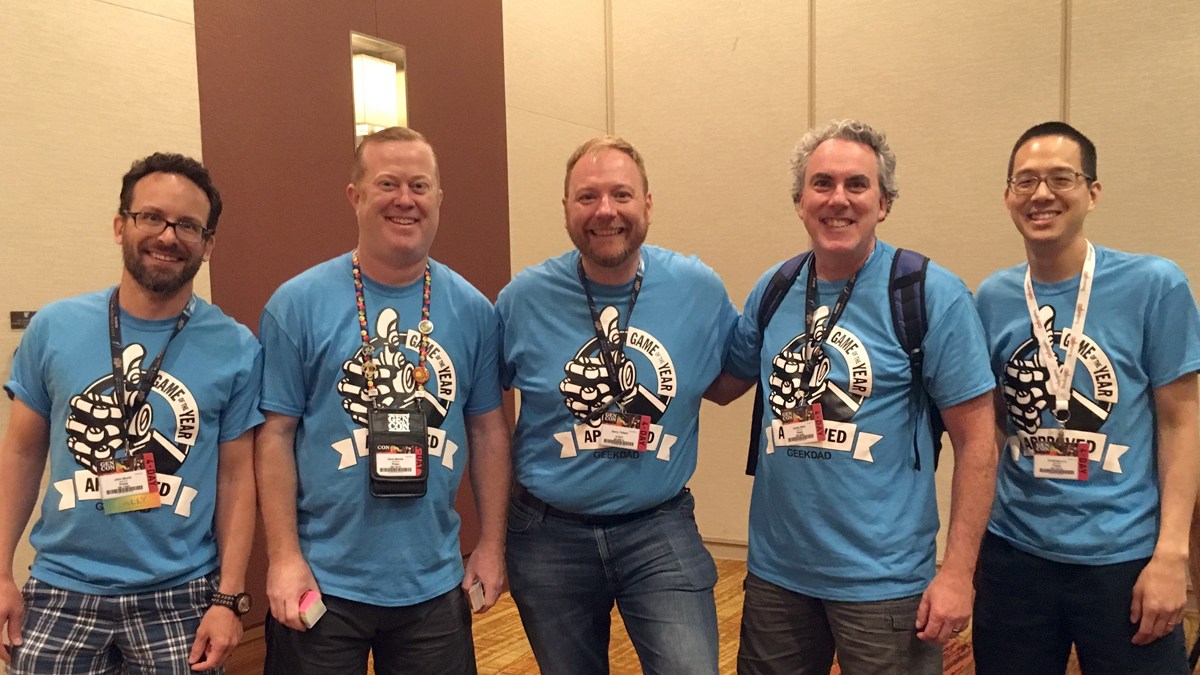 As Gen Con approaches, we’ve been scheduling meetings with publishers, preparing for our (sold-out) Gaming with GeekDad event, and poring over BoardGameGeek’s Gen Con preview list to see what games will be making their debut at the “Best Four Days in Gaming.” We’re excited to meet up in Indianapolis soon. Here’s what we’re eager to see this year!

I attended my first Gen Con two years ago, but then scheduling and finances meant I had to miss last year. So this time I’m going a bit more prepared and way more excited, but at the same time having a better idea of what to expect actually has me a bit more overwhelmed than last time.

Number one on the list of things I’m looking forward to is seeing and hanging out with my fellow GeekDads. While we chat a lot on Slack, we rarely get to be in the same place at the same time, so Gen Con is a great chance to do that.

There are also the people in the gaming industry that I “talk” to frequently through the year via email but have never met in person. Finally getting to put a face to a name is always great.

Oh, and there are also a few games to be played. Doing nothing but playing board games for days on end is my ideal world scenario, and for obvious reasons, not something I get to do as often as I’d like. There will be brand new games to explore and fall in love with and old favorites to revisit. I’ll get to be introduced to favorites my friends are playing and introduce them to my new favorites.

I just counted back: I can hardly believe this is already my seventh straight Gen Con. So many die rolls and card draws; so many Mountain Dews and granola bars and peanut butter crackers; so many hours not slept; so many—So. Many.—games lost to Jonathan Liu.

Role-playing games are one of the big things that keep me coming back: I like to try new systems, and I like the chance to share the table with people I only see maybe once a year. This year, I managed to get event tickets for Steve Jackson’s The Fantasy Trip, which I’ve never played, and a Dungeons & Dragons adventure run by the team at Kobold Press. (I’m playing both of those with friend of GeekDad Brian Stillman, whose D&D art history documentary Eye of the Beholder is screening at Gen Con, and is really a must-watch for fans of the game and the artists behind it.) I’m also playing a session of the fantasy heist RPG Dusk City Outlaws, which I’ve done once before and really enjoyed. Finally, I’m getting behind the GM screen myself to run a Numenera adventure for friends. Brian and GeekDad’s James Floyd Kelly gave me the confidence to try a short adventure a few years ago for just the two of them. I appreciated their patience as a rookie, and it definitely laid the foundation for this one, which I’ve run a few times this year.

In terms of the more standard tabletop games, I’m hoping to get a chance to try WizKids’ Palm Trees and ArchRavelry from XYZ Game Labs. I played a prototype of XYZ’s knitting-themed game a couple Gen Cons ago, and their Robot Lab went over well with one of the families at our Gaming with GeekDad event last year. (Borderlands fans take note: There’s a licensed adaptation of Robot Lab called Tiny Tina’s Robot Tea Party with art that you’ll love.) It’s always a ton of fun to visit the Steve Jackson Games booth too, and I’m really interested in checking out the new Deadly Doodles.

Oh, and GeekDad Rob is planning to bring the Star Wars: Outer Rim board game—so there’s that. And I do love some Star Wars. Just a little.

This will be my 5th consecutive Gen Con, and while I always TRY to make plans, I know that they’ll ultimately get shredded once I arrive. That said, there are still quite a few things I’m looking forward to doing/playing.
Frostgrave — For the last two years, I have managed to get a game of Frostgrave in with fellow GeekDad John Booth and good friend Brian Stillman. The three of us have had the good fortune to get to play with the game’s creator, Joseph McCullough, the last two years, but this year Joe can’t make it. But we will still play!
Kids in Space — I have really enjoyed the Kids on Bikes RPG the last few years, and this year Renegade is releasing a new RPG called Kids in Space. No idea whether I’ll like it or not, but I’m game for giving it a try. I’m hoping they’ll be running some demos or at least have the rulebook available for purchase. If it’s anything like Kids on Bikes, I have a strong feeling I’ll enjoy it.

Terror Below — I backed this game on Kickstarter and will be picking up my copy at Gen Con. Think Tremors (the movie) and you’ve got the general idea. The gameplay seemed interesting and fun, so getting to play with its creators could be a possibility.
Miniature Collecting — I’m trying to expand my miniature collection for my weekly D&D game, and this year my goal is to bring home some new and unique minis.
More Gaming with the GeekDads — Honestly, I get to play more boardgames in these four days than I typically do in a few months at home. And I play most of them with my fellow GeekDad writers… it’s gonna be a great four days!

I may as well admit it: I’m totally part of the cult of the new. I can appreciate old favorites (I still play Carcassonne, one of the games that first sucked me into this world) but I love seeing the variety of new ways that game designers invent to thrill, frustrate, and entertain me. Each year at Gen Con, I spend just about every available hour in the exhibit hall, walking the floor and checking out the booths. It’s my chance to meet up with publishers that I already know (and often only see in person once a year), and to meet people who are new to me—sometimes because I just hadn’t met them before, sometimes because they’re brand-new publishers.

I love checking out the new releases and getting news about upcoming releases. Since Gen Con is typically my one big convention for the year, I pack those four days with as many visits with publishers as I can. (And I still don’t see everything! Gen Con is huge.)

I also love getting together with my fellow GeekDads—both to play games and also just to hang out, since we rarely see each other throughout the rest of the year. Yes, we always end up acquiring more games at Gen Con, but we also bring a couple of our favorites to share with each other. Last year, we moved our Gaming with GeekDad event to mid-day Saturday rather than a late evening, and I was happy to see more families with younger kids attend (even though it was a bit of a trek from the convention center). I’m excited to see who attends this year!

As for specific games I’m anticipating, it’s always fun to see the final versions of games that I’ve reviewed in prototype form. Tiny Epic Mechs, which was on Kickstarter last year, will be available this year, and I’m happy that it’ll finally be available for everyone to get for themselves. Point Salad, one of AEG’s Big Game Night titles, is one that I got to try at GameStorm a couple years ago as a prototype, so I was really happy when AEG picked it up for publication. I’ve ordered myself a few of the new titles from Oink Games to pick up at the con. And, of course, I can’t wait to see what Renegade and Dire Wolf are doing with the two new Clank! titles, especially the Acquisitions Inc. set, which includes legacy elements.

One last note: earlier this year, our Games Editor Dave Banks stepped down, so we’ll miss him! He’s done a lot of the organizing for us in the past, so this year Rob and I are taking up the reins and hoping we do a good job. 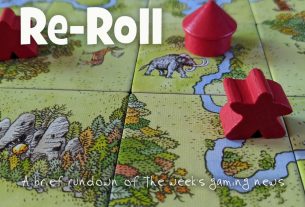