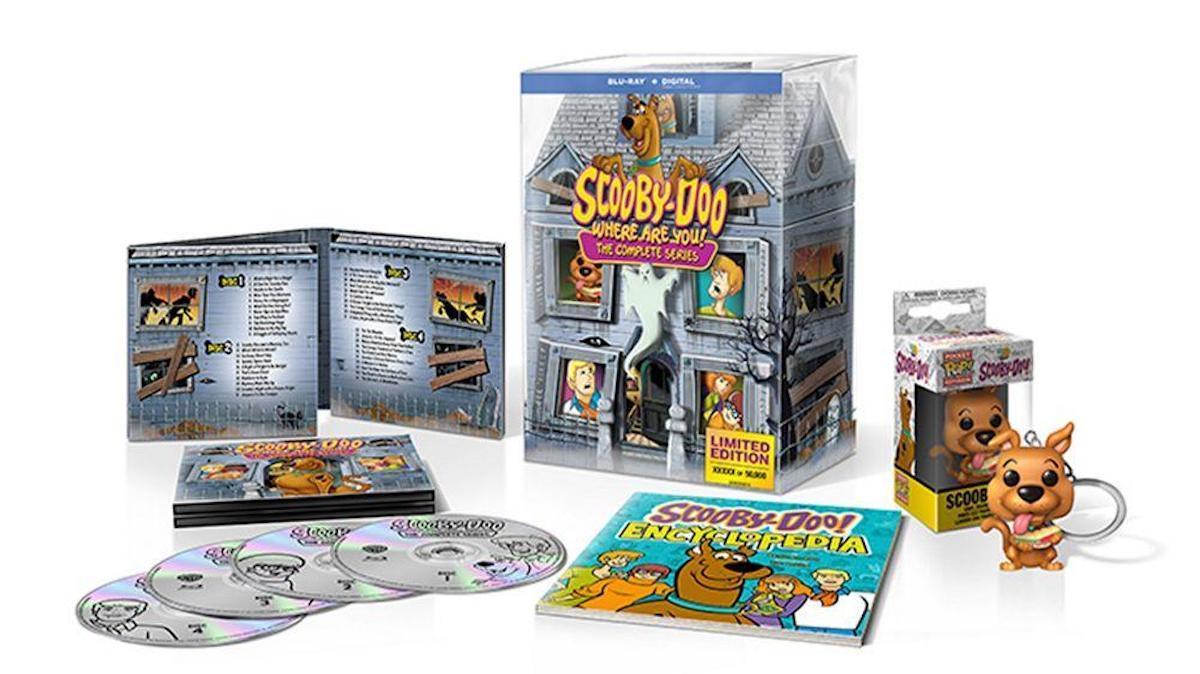 The 50th Anniversary of Scooby-Doo!

In the 50 years since his debut, Scooby-Doo and his gang have become so iconic that our favorite terrified pooch has become the fifth most recognizable cartoon character in the world. That’s according to Jim Krieg, a writer/producer of Scooby gang in many of its incarnations.

And, to commemorate that longevity, there’s an amazing box set of the original Scooby-Doo! episodes. More on that (scroll to the bottom).

First, the writers and cast members talk about what they love about Scooby-Doo.

Krieg spoke about Scooby at a press roundtable after the panel at Comic-Con in San Diego celebrating the 50 years of Scooby-Doo. Joining him at the roundtable were writer/producer Jeremy Adams, and the current voices of Daphe and Velma, Grey DeLisle/Grey Griffin and Kate Micucci.

Krieg and Adams agreed there’s something deep that resonates about the show that contributes to its longevity. (FYI for those unfamiliar with their work: Krieg and Adams co-wrote the “Scoobynatural” episode of Supernatural along with Supernatural showrunner Eric Kripke.)

“Scooby-Doo is about kids finding and confronting the monster, unmasking it, and finding it’s not so terrible after all,” Krieg said. “The purpose is to hand-hold kids through scary situations.”

“A a little kid you want to be scared,” he added. “What Scooby and Shaggy do is make it okay to be afraid.”

And, of course, there’s also the fun of the core group–Fred, Velma, Daphne, Scooby, and Shaggy–the physical hi-jinks of the gang, and the fun of solving mysteries. “The Scooby Gang has become an absolute term for a group of friends solving mysteries,” Krieg noted.

As current writers working on the property, the pair said the challenge in dealing with characters that have been around so long is to figure out new ways to have the gang solve similar problems. (Which is how things like “Scoobynatural” happen.)

Adams was a fan first, as probably all of us were as kids.

“I grew up with Scooby-Doo. I was scared of the monsters but, hey, if they had on the Harlem Globetrotters, I would watch those.”

As for how the “Scoobynatural” episode happened, well, they basically thought “heck, let’s try to pitch it.”

“One of my good friends became the Supernatural show runner so Jim says ‘approach him and pitch it to him.’ Thirty minutes later, I heard back, and he was so excited. Nothing comes together in this business like that. We didn’t get notes or suggestions from anyone [when writing the episode], just encouragement and people thrilled with it.”

Adams said he has another crossover he’d love to write. “I want Stallone or Schwarzenegger. We need the Expendables and Scooby.”

Krieg said, as a big KISS fan, he loved writing the Scooby-Doo! and KISS: Rock and Roll Mystery, but, alas, his other dream crossover, the Monkees, isn’t possible anymore. He had a spec script of a Scooby-Doo/Doctor Who crossover but it didn’t happen either.

For DeLisle (who also uses Grey Griffin), there’s a personal connection to her role as Daphne.

“I never do the part without thinking of Mary Kay,” she said.

Mary Kay Bergman had the role of Daphne when she passed away and was DeLisle’s mentor and friend.

“When they called me to audition for the role, I did it for her but I deliberately didn’t listen to any of her work because I didn’t want to imitate her.”

And, yet, after the audition, everyone said she sounded eerily like Bergman, DeLisle said, adding that it’s still hard for her to listen to her recordings as the character because of that.

Micucci said she grew up loving the show, watched it all the time after school, and that Velma was a dream role. Both women said they loved the evolution in the girls of the Scooby gang and talked about how they got their parts and what they enjoy about their characters:

DeLisle and Micucci record together and love it enough to exchange gifts:

And, now the promised details on Scooby-Doo, Where Are You! The Complete Series (Limited Edition 50th Anniversary Mystery Mansion) Blu-ray box set.

The 50th Anniversary Box Set includes, of course, all the 41 original episodes on four-discs, as well as a digital copy, plus memorabilia that includes an exclusive Scooby-Doo Funko key chain and a mini Scooby-Doo encyclopedia.

And, then, there’s the bonus content. Descriptions are from the Warner Brother press release as I, alas, do not have the set as yet:

My Life with Scooby – Frank Welker’s Animated Journey (Featurette):
Frank Welker is the only voice actor to work on Scooby-Doo in its many incarnations, since the very first series debuted in 1969. Welker has been the voice of Freddy since the beginning and has provided the voice of Scooby-Doo since 2002. My Life with Scooby is a personal look at the seminal voice actor’s five-decade body of work on Scooby-Doo, complete with personal stories and fun memories from the recording booth.

A Scooby-Doo for Everyone (Featurette):
The iconic look and feel of the original Scooby-Doo cartoon is a beloved classic. Within 50 years of animated adventures, WB Animation has created a host of different versions of the series for each new generation. From the kid-friendly approach of A Pup Named Scooby-Doo to the envisioned look of Be Cool Scooby-Doo, WB Animation has consistently reimagined the characters in fun and exciting ways over five decades. Interviews with the animators behind the many different Scooby-Doo versions, reveal the compelling creative process.

50 Years of Scooby Snacks (Featurette):
A narrated history of the cultural impact of everyone’s favorite mystery-solving gang over the last 50 years. This fun-filled featurette is brought to life by interviews with creatives and cultural historians, plus clips from the TV series, films, toys lines, Warner Bros. World Abu Dhabi Scooby-Doo ride, and upcoming animated feature: Scoob.

Scooby-Doo and the Lost City of Gold Trailer:
A sneak peak of the all-new Scooby-Doo! Live stage production.

Note: And to think, none of this would have happened but for those meddling kids!

Click through to read all of “SDCC: “Scooby-Doo” Celebrates Fifty Years of Mysteries” at GeekMom.If you value content from GeekMom, please support us via Patreon or use this link to shop at Amazon. Thanks!