Ray: Whether you’re into Tom Taylor’s horrific DC sci-fi zombie thriller will depend on your tolerance for zombie thrillers as a whole. This is an unapologetically gruesome, horrific story where heroes die quickly and horribly and there are few happy endings.

The anti-life plague sent by Darkseid in Cyborg’s body is spreading quickly through both the internet and blood contact, as Aquaman finds out in the opening pages where he encounters a ghost ship full of zombies and is quickly consumed as they sink down to the depths. Superman, Lois, Jon, and Damian managed to survive the original carnage and are trying to survive in a decimated Metropolis – including a Daily Planet overrun by zombies – but others weren’t so lucky. Harley and Ivy have a sweet segment together as they plot their escape and Harley goes to leave the Joker – but Joker’s already been taken over by the virus, meaning Harley’s breakup might get more violent than expected.

The virus manages to crawl into all corners of the world, like when Dinah, Ollie, and Hal are going camping and Hal decides to check his phone. A zombie with a Lantern ring is terrifying, forcing Dinah to end the battle quickly and brutally. This results in her getting Hal’s GL ring, a surprising twist that echoes the way Taylor twisted legacies in the excellent Injustice: Gods Among Us comic book.

But the heart of this issue is Batman, seen the last issue being attacked by his zombified proteges. Infected and using a Mr. Freeze suit to stabilize the infection for a short time, he gives some advice to his fellow heroes and some words of wisdom to Damian before he succumbs and Alfred is forced to make an impossible choice. The Justice League and allies are falling fast, and the overwhelming bleakness is a little hard to read.

However, Taylor packs more than enough strong character-driven moments to make this a compelling story, even if the genre isn’t quite to my taste. 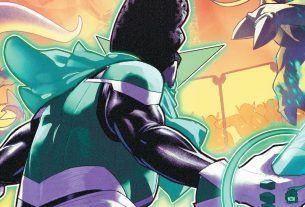