Ray: Gene Luen Yang continues to settle into Jeff Lemire’s old digs comfortably, keeping the main tone of the series intact while adding his own unique flair and talent for dialogue into this oddball superhero team. When we last left off, Mr. and Mrs. Terrific’s first date since being reunited was interrupted by a new threat – a mysterious high-tech villain using the ten plagues to terrorize the surrounding area. As The Terrifics #16 opens, they’re being besieged by an army of robotic gnats, leading to a great action segment where Plastic Man turns into a jeep to plow through them. My biggest worry last issue was that the other members of the Terrifics were largely ignored so we could focus on the Terrific clan drama, but that’s not the case this issue – the banter between the rest of the team is great, and Yang drawing on Plastic Man’s background as an old-school Irish Catholic gives him a unique view directly opposite Mr. Terrific’s for this threat.

The Terrifics soon find themselves under a dome trapping Stagg headquarters in the attack zone, and Simon and Sapphire are barely able to communicate with them. The mysterious villain, a digital presence who takes the form of a woman, escalates the attack by trapping them in an underground virtual labyrinth. I thought this segment flagged a tiny bit due to its video game logic – shady fly shopkeepers, health bars, one-up lives – that didn’t really seem to match the biblical themes of the rest of the issue. But with every issue, we’re learning more about these characters and what drives them, and the brief segment with Offspring and Element Dog was one of my favorites of the issue. The ending seemingly reveals the identity of the villain, and it’s both a big surprise and not one at all. Very few writers are able to follow a Lemire book, and certainly not this seamlessly.

Corrina: The Terrifics explores religion and always has. Michael Holt is an open atheist, while Paula has a strong faith, and now we know that Plas also has absorbed his Catholic upbringing.

That certainly adds layers to the team being trapped in a simulation by a godlike being.

But the real mystery is the AI who seems to be running the game. Stagg (in both incarnations) seems to want to keep it locked up. But would that be a good or bad thing? It’s hard to tell with this series because the characters come at problems from such a different angle: the scientists, the former thief, the alien, the transformed chemical man.

In their own way, they’ve been created or created themselves into a hero, creating a parallel to whatever wants to escape Stagg’s hold.

That’s a lot of philosophy to tuck into a comic with a fun Silver Age vibe. 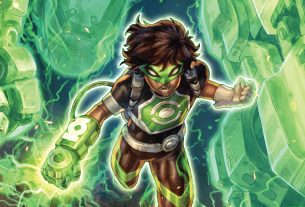