Corrina: Should They *Really* Trust Circe?

Ray: I’m a sucker for old-school comic book events where the heroes unite against a massive threat from beyond their world and shocking secrets are revealed. While Marvel is killing it with a story like that in War of the Realms, DC has a book that manages to cram that kind of story into every issue of an ongoing series. That would be Justice League Dark, which has another outstanding issue, Justice League Dark #10, that takes us back to the start of the war. Nabu, the main villain of this series alongside The Upside-Down Man, finally gets the chance to say his piece and he almost sounds…reasonable. Desperate to protect the world from the Otherkind, he plans to eradicate magic to keep them from getting it – even if he has to kill every magical being including himself. Sure, he’s willing to kill Khalid to keep this plan a secret, but there’s a core of greater-good decency left in him. However, his quest has left the whole land of Myrra facing extinction, as the JLD battles to evacuate before it’s too late.

Tynion does an amazing job of capturing the feel of an apocalypse, as Bobo grapples with his failures. Martinez Bueno’s art is sensational, although I was a little surprised by how cute Bobo looked here. More like a tiny monkey than a gruff drunk ape. The best segments of the issue aren’t set on Myrra, but focus on Zatanna as she learns a shocking secret about her past tying into the search for Mordru and exposing two of the most important people in her life. Her rage in the aftermath and her battle with a particularly fearsome Otherkind is one of the best scenes in the series so far. There’s a lot of villains in this issue, with Circe playing a role that reminds me a lot of Loki when he’s working with the heroes. The evacuation seems to be going off effectively, but the issue ends with a devil’s bargain offered by one of the new Lords of Order provides the most shocking cliffhanger yet. Magic stories are hard to pull off, but this title is consistently full of suspense, horror, and brilliant visuals. It might be DC’s best book.

Corrina: I am a sucker for pages with a character looming over scenes of what has gone before and there is an amazing one in Justice League Dark #10, with Fate looming over the challenges facing the universe. I just love the yellow oozing at the corners of the page. It’s the kind of sequence only comics does well, one that’s impossible in a live-action movie but would work amazingly well in the type of animation style of Spider-Man: Into the Spider-Verse.

There’s also the yellow emphasis around Dr. Fate’s word balloons and the colors around the other Lords of Order’s words. It all makes for a feast for the eyeballs and the entire art team needs to take a bow.

Except, they outdo themselves again with Zatanna’s fit of rage. Z has been a bit hog-tied this whole series because her magic has gone awry. But when she gets the news about being manipulated, she finally lets loose, showing what she is truly capable of. It’s a reminder that she’s more than the voice of caution in this group.

And, yes, of course, the writing remains excellent. 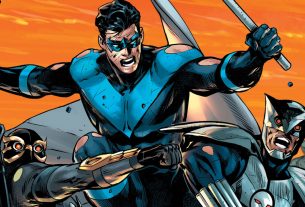