Corrina: Back to the Destruction of Krypton

Ray: Marc Andreyko’s Supergirl run sending her on a quest for justice through space has been a compelling read, but over the last few issues it’s taken on a mean streak that has severely blunted my enjoyment. Unfortunately, it doubles down on that tone this issue with an often grotesque plot that pushes Supergirl and the Omega Men to their limits. When we last left, the refugee ship escaping Harry Hokum’s warship came under attack by a mob of horribly mutated Supergirl clones, each with one of her powers. As they battle to survive, Kara gets a kiss-based power-lift from Starfire’s brother Ryand’r, giving her a boost of solar energy. That allows her to take the clones down, but it also accidentally kills them because they’re genetically damaged. Kara’s horror over this development is well done, but it’s also yet another highly traumatizing event that she doesn’t need on her conscience after seeing a child die last issue.

And that sums up my issue with this arc – Kara sought out this mission to get answers about Krypton, but everything she’s experienced has likely left her in a worse mental state, not better. She’s heading back to Earth in a few months, and I’m really hoping we’ll be able to move on to a lighter run. There is some good stuff in this issue – Z’ndr’s ongoing subplot with Krypto is a lot of fun, although things seem to get awkward when he’s reunited with Kara just as she and Ryand’r are getting close. I’m not sure I want to see Kara date either of these guys – her bond with Ben Rubel seemed much more developed, and Z’ndr, in particular, seems older. The major villain of this arc, Lord Gandelo, ups her war against Kara but largely seems like a generic villain. Things seem to be coming to a head as we’re introduced to a vicious cult worshipping Rogol Zaar, but overall I just want more stories about Kara NOT in the middle of a massive crisis.

Corrina: Again, I have issues with the dark tone of this arc. Supergirl doesn’t have to be written all ages but I wouldn’t buy the last few issues even for pre-teens.

I’m also not thrilled with the variant cover. I realize it’s the month for this artist’s covers and I can see the talent in the work. But it also sexualizes a teenage girl.

On the story, we’re circling back to the great galactic conspiracy and the indication, once again, that Rogol Zaar was responsible for Krypton’s destruction. That was always a weak point of this arc. The strong points have been Kara’s encounters with various alien races and her new friendships.

All in all, a very mixed bag this week. 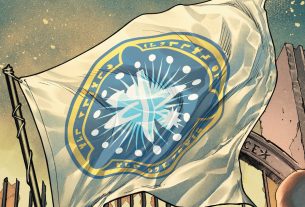