Ray: In some ways, I think Raven’s solo miniseries suffered from a bad case of missed timing – it’s a compelling character-driven take on a magical heroine with a dark secret and the supernatural team she’s part of forming. But it’s coming out at the same time as the much larger-scale Justice League Dark (which I’d love to see her join after this and Titans wrap). So it gets shuffled under the radar, which is unfortunate, since it’s gotten more enjoyable as it goes along. This issue finds Raven and her new team in Night Force on the run from the Shadowriders, the supernatural army designed to kill magic-users. The escape leads them back to 1906, at the site of the great earthquake where this all began. But at the same time, Black Alice is up to her own sinister actions, trying to trade Skye to the Shadowriders. That leads to a big reveal about the blonde girl, and sends Alice scurrying back to Night Force after she’s betrayed.

There’s a lot of chase segments in the first half of the issue, and I continue to be amused by the fact that no one on the team seems to like or respect their leader, Baron Winters. The addition of Robert Diaz, the young gay man with energy powers, gives the issue a nice dose of normal-person stakes as well. But the issue’s strongest segment comes when Raven briefly returns home to try to deal with the life she left behind. She’s been gone for days, and much like Derek in Sideways last week, she’s left a big mess behind. The awkward talk she has with her guardians will feel familiar to most teenage readers, but it’s handled very well – until she gets an urgent message from Baron Winters, and is forced to make a tragic decision that she’ll never forget – even if other people will. The first Raven miniseries a few years back had some pacing issues, but this one is heading towards a very strong conclusion. 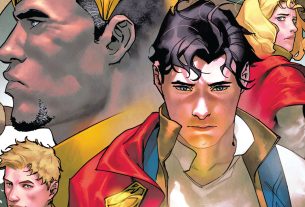