Ray: After a disastrous first two issues, Dan Abnett’s revamp of the older Titans squad starts to find its footing, albeit it still has a lot of issues with characterization along the way. The sudden development of mutant/inhuman/source wall powers that drives the plot until now has mainly been used for generic abilities like super-strength or energy blasts, but that’s thankfully not the case this issue. Instead, deputized again by Miss Martian, the Titans find themselves facing enemies straight out of a fantasy world. This issue finally starts explaining M’gann’s role on the team a little better and giving her some of her more lovable quirks from Young Justice and her earlier appearances, but it still feels sort of awkward – sometimes she’s making surprisingly ruthless statements, the next moment she’s making cute idioms that seem more fit for Starfire from Teen Titans Go. And Nightwing’s attitude towards her still seems unnecessarily belligerent. However, once the Titans arrive on the scene, the book takes a very interesting turn that shows Abnett can create compelling conflicts when he’s inspired.

The main villain this issue isn’t from this world at all, but rather an otherdimensional being that seems like he might be from the Dark Multiverse. This mysterious Prince Travesty is charming, courtly – and incredibly dangerous, as he believes that Earth is threatening and breaching his world. Of course, not everything is as it seems, and the plot hinges around a kindly old schoolteacher who had a brief career as a fantasy novelist decades ago – and may have created all of these characters once upon a time. That creates an interesting dilemma for the team. You’ve got a new metahuman with an incredibly dangerous power who has no desire to actually hurt anyone. The solution that Miss Martian comes up with for him seems necessary but still cruel, but the end of the issue shows there may be more to the story – and one member of the Titans is no longer who they appear to be. The dialogue still needs a lot of work, but the plot in this series seems to be leveling up. 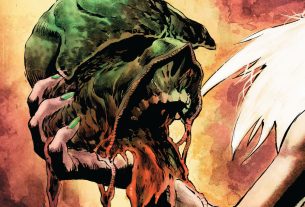