Ray: Titans continues to whiplash all over the place, coming off last month’s super-dark spotlight issue for the origin of Mother Blood. Now, with almost zero preamble, the team is off on a magical adventure in Titans #33, in search of Raven’s soul-self. This ties back to the strange but surprisingly intriguing storyline at the start of this run, where the team encountered a kindly writer whose new metahuman power allowed him to bring the fictional fantasy world he created to life. This brought several powerful dark figures into the world – and they escaped with Raven’s soul self. The bulk of this issue is the Titans arguing with each other as they power their way through this mystical world, trying to get to the central castle where the villain is holding Raven’s soul. Bruno Redondo’s art is excellent, but it’s all largely in service of some pretty generic fantasy tropes. Still, visually this is probably the most engaging issue of the series.

The story is split between the Titans’ battle, and the villains in their castle. The main villain is mostly a generic figure, and his chief second “Commander Lenore” is supposed to be a mystery, but her name gives away her identity to anyone with a basic knowledge of Edgar Allan Poe. I was amused by the fact that the creator of this world, Ernest Hinton, is just hanging around in the world he created and the villains have to keep him occupied and happy so he doesn’t figure out their nefarious plans. That’s the kind of cleverness I’d like to see more of, as well as the scenes involving Ben Rubel using his geek knowledge to guide the heroes through their adventures. I just wish things were a bit more fun – too much of this issue is just one setup for a dramatic fight after another that winds up petering out. Kyle Rayner, the newest Titan, is the only member of the team who seems to be having any fun.

Corrina: The most interesting parts of Titans #33 concerns Hinton’s eagerness to explore the world he’s created and Ben Rubel’s geeking out while explaining the world to his Titans teammates.

Unfortunately, that means the Titans themselves are the least interesting parts of the story. That includes Raven and her soul-self, who are written the most obvious way, with one completely unemotional and the other full of rage. There are so many things to do in a fantasy world, and yet what we have is a scheming warlord, scheming interlopers, and a captive ragey soul. I’m not sure if this is meta-commentary on generic fantasies or if it’s reveling in generic fantasies. 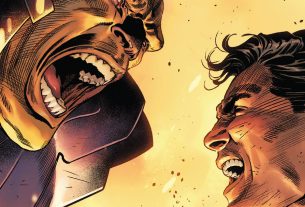 Review – Superman: Action Comics #1037 – The Fall of the Authority