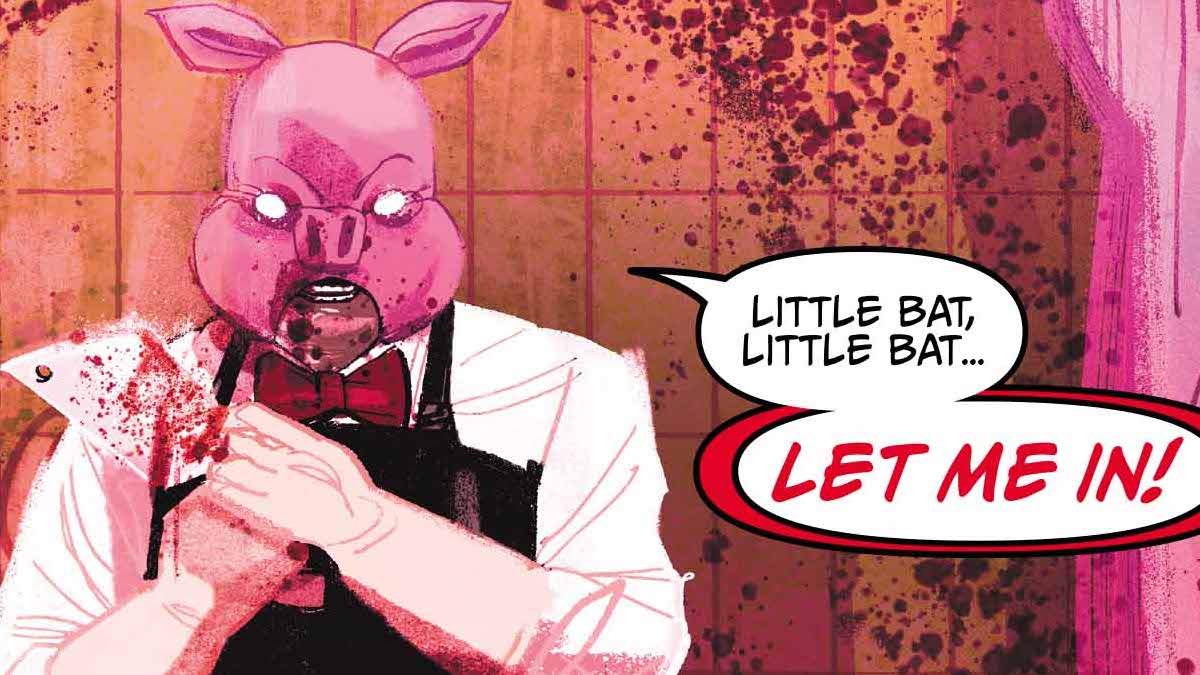 Corrina: On the negative side of Pyg

Ray: Is there any Batman villain more divisive than Professor Pyg? From his strange, mincing speech patterns to his twisted behavior involving acid masks and turning people into brain-damaged dolls, fans either love him or hate him. I tend to fall into the former category, so I was going to be a hard sell on Batman #62, a stand-alone issue. However, the presence of Mister Miracle artist Mitch Gerads on this issue was a major selling point, as something unique tends to happen when King and Gerads work together. And sure enough, this issue looks brilliant – a grotesque, bloodstained closed-room mystery. Much like King and Eastman’s Kamandi Challenge issue, this is essentially a locked-room mystery – after the cliffhanger of the previous arc, where Batman was attacked by the Flashpoint Thomas Wayne Batman, he wakes up in a meat locker. Tied up and mysteriously unable to hear, he finds himself at the mercy of Professor Pyg.

Intimate, intense, and creepy, the issue immerses you in its story from the first minute. This is a Batman who is completely out of his element – terrified and confused – and the issue grounds itself in his perspective. It takes place in seconds as Batman desperately takes small moves to escape and fight back. His mind struggles to piece together how he got here and what’s wrong with him. The problem is, it doesn’t quite give you any answers either. It leaves you in much the same place as it began. Professor Pyg as drawn by Gerads is genuinely disturbing, but I don’t think King does much to set him apart from the other versions of the character that didn’t work for me. He has more in common with Buffalo Bill from Silence of the Lambs than he does with a Batman villain. But then the issue takes a sudden left turn, calling everything we’ve seen before including Batman’s sanity into question, and it clicks in a way it hasn’t before. Ultimately, this is a very well-executed issue, but it lacks that special touch that’s made King’s other issues in this vein stand out so perfectly.

Corrina: We last left Batman near-bottom and this issue makes it clear he’s beginning to reside there.

Or, hanging there, to be literal.

The splash page that opens the scene is truly disturbing, as much as anything in Mister Miracle. Pyg’s dancing motion is nicely suggested by a swinging leg and the glint of his knife. The red and black at the edges of the panel are Batman’s disassociation, while red and black is also on the floor, with the red blood streaming over the black floor.

I’ve been complaining about the presence of too much blood over in Titans but while this issue also drips with blood (such as down Batman’s cowl), Gerads gives it a more symbolic and surreal feel, making his work more effective at portraying the horror of the situation. The ending even uses the different types of blood splatter to differentiate between Batman’s two realities.

As far as the overall arc goes, I’ve no idea where this fits in but, yes, it would make sense if Damian were to help his father regain some emotional balance. Bruce has certainly been shutting him out, which has to be damaging to the boy as well.