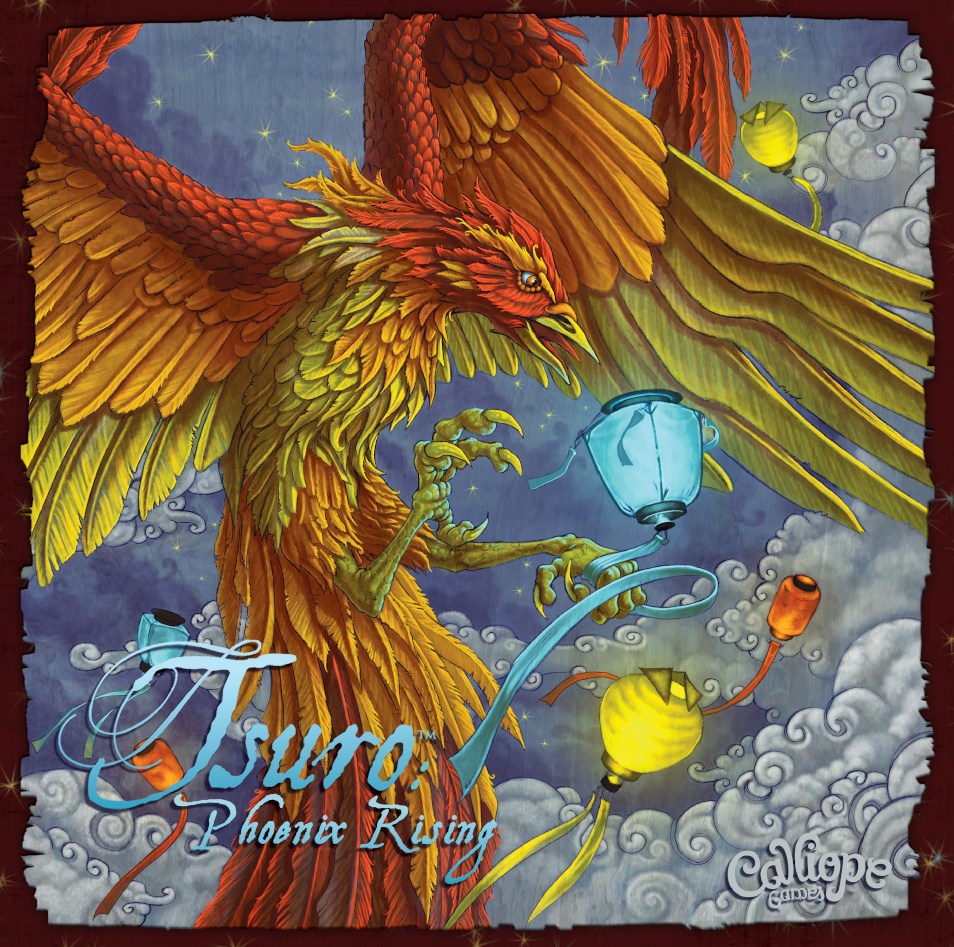 The stars have been stolen from the sky, and paper lanterns have been sent up to replace them. Phoenixes, drawn by the lights, are transforming the lanterns into new stars. Be the first to create a new constellation in Tsuro: Phoenix Rising!

What Is Tsuro: Phoenix Rising?

Tsuro: Phoenix Rising is a game for 2 to 8 players, ages 8 and up, and takes about 20 to 60 minutes to play (depending on player count). It’s currently seeking funding on Kickstarter, with a pledge level of $40 for a copy of the game, or $55 for the Kickstarter edition (which includes some bonus components). This version of Tsuro is a bit deeper and more complex than the original, but I think 8 and up is still an appropriate age recommendation.

Note: My review is based on a prototype copy, so it is subject to change and may not reflect final component quality. For instance, the final phoenix pawns will be plastic sculpts rather than the flat 2D pawns seen in my photos, and the lanterns will actually be molded plastic lanterns instead of simple cubes.

The path tiles will look somewhat familiar to those who have played other versions of Tsuro: each one is a square tile, with various paths drawn across the face in straight lines and curves. However, these new tiles are double-sided: one side has the traditional Tsuro paths where each edge has two paths leading from it (though a few have some extra wiggles just for flavor); the reverse has some paths that lead into the four corners of the tile, and each edge only has one path leading to it, with the other space marked by a little starburst.

The artwork on the tiles is lovely, with swirling clouds and small golden sparkles on the starting center tiles. The clouds also assist in setup, as you’ll see below. All 16 center tiles and three of the edge tiles have lanterns printed on them (on both sides of the tile), with one side “lit.” I like that the lanterns have three different shapes, which will correspond to the lantern markers in the final game, making it color blind friendly.

The game board trays are plastic trays, each with a 3×3 grid. Within each box of the grid, there’s a round bump in the center, designed so that when you place the tiles in the wells, you can easily pick them back up by pushing down anywhere along an edge or corner of the tile. Since the tiles will often be picked up, flipped, and rotated during gameplay, this is a great solution that makes it easier to access the tiles without making a mess of the rest of the board. The four trays have small slots and tabs that make the whole thing fit together easily. My only complaint about the game trays is that they look a little incomplete when the tiles haven’t all been filled in. For the prototype, at least, the plastic on the underside looks more finished (because it has a matte surface) than the actual playing surface.

How to Play Tsuro: Phoenix Rising

The goal of the game is to collect 7 star tokens, or be the last phoenix remaining.

Assemble the game trays and shuffle the 16 center tiles, laying them out at random in the center of the trays. Each of the center tiles has cloud patterns around the edge on one side and scattered across the tile on the other side; they should be flipped so that all of them have the clouds on the edges. Then, place the lantern markers on the tiles that show “lit” lanterns.

Give each player a phoenix pawn and a life token. Each player should choose a different position on the outside edge of the trays, facing an empty square on the tray. Shuffle the edge tiles and give each player two, placing the rest in a stack with the Phoenix tile on top. Give the first player marker to the youngest player.

On your turn, you will create your path, travel your path, and then prepare for the next turn.

If you’re facing an empty square (as you will be on the first turn), you place one of the two tiles from your hand into the empty space in front of you so that there’s a path connected from your position. Then, return the other tile to the bottom of the stack.

If you’re facing another tile, then you pick up the tile you’re facing, and flip or rotate it so that there is a path connected to your position. (If there are other phoenix pawns or a lantern token on that tile, pick them up and then place them back into their original positions after you replace the tile.)

After creating a path ahead of your phoenix (whether by placing a new tile or adjusting an existing one), move your phoenix along the path until it comes to an end. If it goes off the edge of the entire game tray, place the pawn in front of yourself.

If the tile you placed or adjusted creates a path in front of other players as well, they will also travel along those paths, collecting and moving lanterns when applicable, in clockwise order.

Prepare for Next Turn

At the end of your turn, if you’re facing an empty space on the game tray, draw two tiles from the top of the stack (under the Phoenix tile).

There are a few ways in which the phoenix can lose its life and is removed from the board:

You may also choose to spend a turn by removing your phoenix from the board, and you will re-enter from the outside edge.

To rise from the ashes (i.e., return to the board), you must discard your life token, and then play a tile in an empty space on the edge to enter the board. If you do not have a life token, or there are no empty spaces to re-enter the board, then you have been eliminated from the game. (Hey, it takes another 500 years before you get another chance at rebirth.)

If any player collects 7 (or more) stars, finish the round so that all players have had the same number of turns. The player with the most stars wins; ties are broken by remaining life tokens.

Or, if any player is the last one on the board and none of the other players are able to re-enter (either because they have no life token or because there are no available spaces left), then the sole survivor wins.

If you want a little more of a challenge, there are some advanced rules included as well. Here, when you score a lantern and move the lantern token, the original tile should have the “dim” lantern showing—if not, flip it over. When you place the lantern token on a new tile, it should have the “lit” lantern showing—if not, flip it over. Both of these flips may result in more players moving during your turn because you can affect the tiles that they are facing.

There’s a slight change to infinite loops, too—players are not eliminated, but may still collect lanterns and will stop when they reach the first star token. If the tile is flipped (due to lighting or dimming a lantern tile), that may break the loop. Otherwise, you may flip over any tile within the loop.

Why You Should Play Tsuro: Phoenix Rising

First, a little bit of background: Tsuro was first published in 2004 by WizKids, and later became one of the flagship titles when Calliope Games was founded in 2008. Since then, there has been one new version (Tsuro of the Seas) and a digital version. The original game still remains one of my go-to games for new and casual players, or when we’ve got a big group, because it can handle up to 8 players at a time. It’s easy to learn and pretty intuitive, and most people I’ve introduced it to have enjoyed it.

Now, for the 10th anniversary of Calliope Games (and the 15th anniversary of Tsuro), Phoenix Rising takes that elegant gameplay and adds a few new twists that make the game a bit deeper and more complex, while still retaining a lot of what made the original so much fun. You still follow the path around and try not to fall off the edge of the board, but now you’re chasing those lanterns as they appear around the board.

Because the center of the board is already populated with tiles (unlike previous versions of Tsuro, which start with a blank slate), this version is much more about looking for paths and manipulating paths to get you to those lanterns, rather than building paths that keep you on the board. There is a bit of guesswork about what’s on the back of a tile—if you approach a tile from the corner, you don’t know if you’ll shoot straight across or curve around to an edge when you flip the tile over. Of course, with repeated plays, players with a good memory may start to learn some of the tiles, but it would be a lot to keep track of, and in my plays we mostly just took our chances. The memory piece becomes particularly important in the advanced game, where you have the opportunity to flip over a tile when you move lanterns: with the right play, you could pick up a few stars and knock some opponents off the board during your turn.

The game trays, while not as attractive as the cardboard-based grids of the previous versions, certainly make it a lot easier to manipulate the tiles, and would have been a welcome addition to Tsuro of the Seas, which has daikaiju that roam the seas and can remove tiles. It can get a little fiddly if you’re picking up a tile that has several players on it, but overall I found it to be easily managed.

To me, Tsuro: Phoenix Rising is a little more elegant than Tsuro of the Seas (particularly if you included the sea expansions); there were just more rules to keep track of, and the daikaiju moved randomly so there was more random chance. Here, the initial setup is random, but then most of the gameplay becomes strategic, as you decide where the best place is to put a lantern so that it’s not too easy for your opponents to reach.

The game can last a little longer than original Tsuro (though not always), so the extra life is a nice touch: it means that you don’t get knocked out of the game too early on and then have to wait a long time for it to finish. So far I’ve only had games that ended because of a player collecting 7 stars, but we’ve come very close to having all but one player eliminated.

Overall, I think Tsuro: Phoenix Rising is a nice twist on the classic. It’s easy enough to learn that you don’t need to be familiar with the original to play it, and the strategy is different enough that fans of the original will have something new to explore. Whether you’ve been playing Tsuro for 15 years or you’re just discovering it for the first time, take a trip into the night sky with Tsuro: Phoenix Rising!

For more information or to make a pledge, visit the Tsuro: Phoenix Rising Kickstarter page! 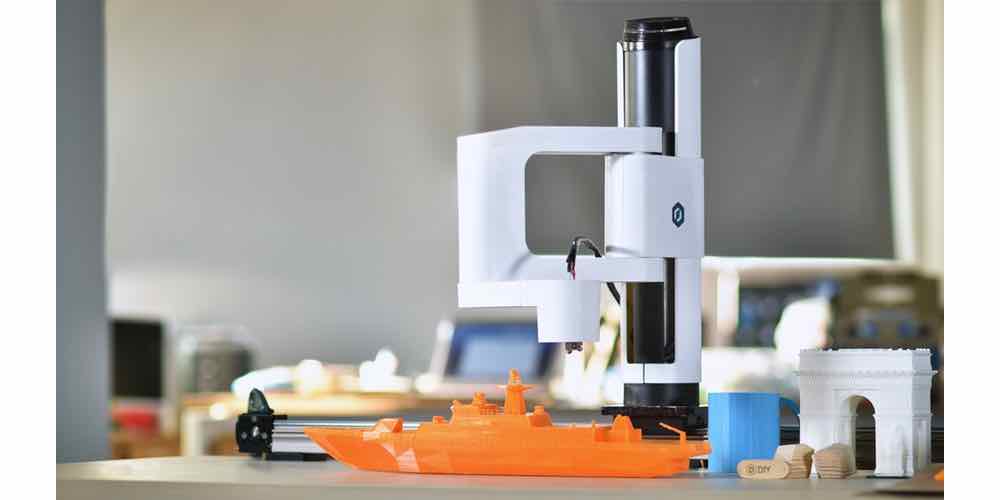 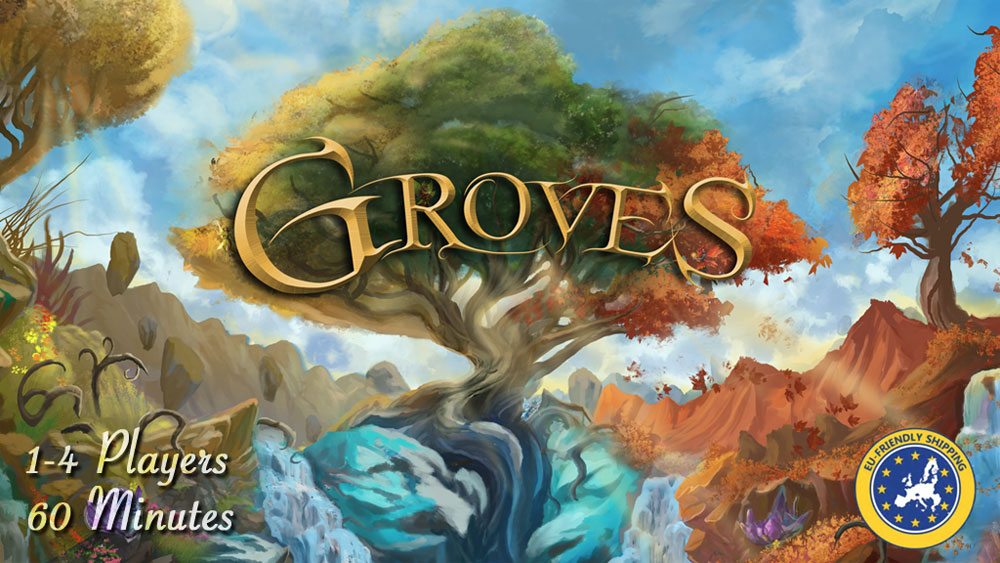