Ray: It’s back to Earth for the Titans in Titans #31, in the aftermath of last issue’s cliffhanger that had the team rescued from their alien marooning by Kyle Rayner. The 90s Green Lantern has been mostly MIA for a while, leading a lot of people to speculate he was about to be killed off. But he’s actually got a pretty key connection to what’s coming next – he’s one of the only people to be behind the Source Wall and survive. So after a brief recap of what he’s seen on that trip, he returns the Titans to Earth so they can decompress after their ordeal. This is mostly a bland series of medical tests overseen by Batman – who is as charming as ever, but does seem less overtly hostile to the team and Donna in particular – but I was glad to see Ben Rubel in the cast again. He deserves better than to be shunted off to limbo after being dropped from Supergirl’s supporting cast.

While most members of the Titans are just dealing with PTSD and injuries, two members have more pressing crises. Raven’s missing soul self is continuing to affect her, as she can’t really connect with anyone and is drifting away from the team. Beast Boy, meanwhile, nearly killed the entire team on the planet. But the source of his current problems becomes clearer when he’s possessed by the forces of The Red, warning that Mother Blood and her cult want to take control of the realm of all living beings. That plot dovetails into the quest to bring Raven’s soul back from Unearth, in ways that are kind of incoherent. The plot is a mess, but the team dynamic here isn’t bad and Kyle is an interesting addition to the cast – he definitely wasn’t a classic Titan, but he has ties to the cast especially Donna. It’s a slight improvement, but this series still has a way to go before it’s a good series overall.

Corrina: Well, that was gross. The whole “red streaming out of Gar” sequence I mean. But, at least that part was over quickly. (And the art team was certainly on point and also deserve kudo for Kyle’s constructs.)

As was the Titans trip into space, aborted so fast that I wondered if there was a plot change at the last minute that included bringing the team back to Earth and adding Kyle as a member. Those who remember their DC history may remember that, once upon a time, Kyle and Donna were a thing. I doubt that’s the case in the current DC continuity but their interaction this issue makes me wonder if that is coming back. Kyle, at least, seems to treat Donna well, better than writers have lately, between her being an evil assassin created by evil Amazons and then being a drunk. (Thankfully, the second part seems to be over.)

As for the rest of the plot, I confess I found everything but the interactions between the characters incoherent, and I barely remember the adventure referenced, mostly because the series has rumbled from plot to plot without much continuity. (For instance, the Titans should have been looking for Raven’s soul-self a long time ago.)

Still can’t recommend the series but at least the addition of Kyle is a breath of fresh air. 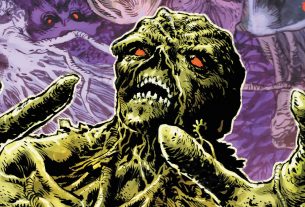