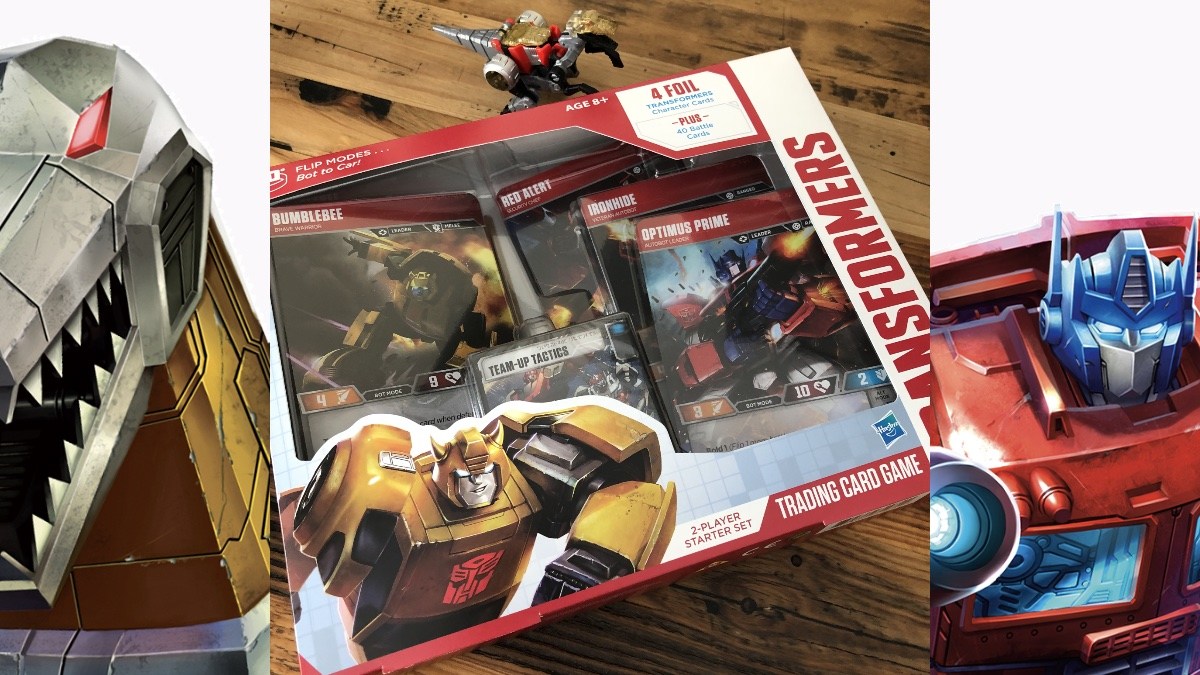 Before it’s even out of the box, the new Transformers Trading Card Game from Hasbro and Wizards of the Coast is going to impress you. The oversized, foil-accented Optimus Prime and Bumblebee cards glitter from the Autobots Starter Set, enticing you to crack the seal and get playing.

Not that you needed much enticement. It’s Wizards of the Coast’s, creators of a little thing called Magic the Gathering, and Hasbro’s Transformers. Together. I’m surprised I was able to keep myself from tearing the box apart before I got in the door.

What’s in the Box

The Autobots Starter Set comes with four oversized hero cards, Optimus Prime, Bumblebee, Ironhide, and Red Alert (all rare quality and all available in the starter box only) and 40 battle cards (mostly common, with a few uncommon and one rare). It’s just enough for one player to play the full game or two players to play with a set of simplified rules.

You can also buy blind booster packs with one additional character and 7 battle cards. The cards are all of varying rarity, from super rare to common. Since each box of booster packs only has 30 packs, that means you’ve got to spend some serious money, twice, if you want to ensure you get both Legendary Warrior Bumblebee and Nemesis Prime. Then again, with 40 characters to collect, and only one character card in each booster pack, a minimum of two booster boxes is a necessity if you don’t want to buy them off the secondary market (where that $15 Hasbro Convention Exclusive booster is going for…$100? Wow).

There’s been a fair amount of chatter online about how rarity distributions aren’t equitable, with it taking more than the advertised 79 packs for ultra rare cards to show up. So I picked up a Wave 1 booster box (plus the two extra booster packs Hasbro sent along with my Starter set) to see how I made out. It’s in no way scientific, but it gave me an idea of how difficult it will be to “catch ’em all.”

On the character side, I found both super rare characters in my 32 booster packs, Nemesis Prime, and Legendary Warrior Bumblebee. Either I got really lucky or the first wave cards are actually more generously distributed than previously reported! I was able to get all 12 common characters (with duplicates of a few), 12 out of 16 uncommon characters (again with some duplicates I can trade). Where the card gods failed me was with the rare characters. There I only found 2 out of 10 rares (though I was able to nab a Grimlock so that I could complete my Dinobot set). Since rare characters are currently about $20 a piece on eBay, I decided another box was the more economical way to go to try and complete the set. You can see if my gamble plays out on my Instagram feed.

On the Battle Card side, I was able to obtain multiples of every common and nearly all uncommon cards, with more than enough cards for two players to split them up and craft full decks. There was only one rare card per booster pack, but they were distributed fairly evenly in the booster box. I was able to find 23 out of 30 rare cards, with some duplicates. That second booster box will hopefully let me complete the battle cards set and max out some of the better cards (the advanced rules allow you to have 3 duplicate battle cards per deck).

When playing with the simplified rule set, the Transformers Trading Card game goes quickly. With your characters in front of you, you declare an attacker and defender and draw two cards, adding any orange icons on the card to your character’s attack power. Your opponent also draws two cards, adding the blue icons to the defending character’s defense. The difference between the totals is the amount of damage dealt to the character. Then your opponent gets to go. You continue, passing back and forth, until all characters are exhausted. You keep racking up damage on bots round after round until one is left standing. It’s enjoyable, but not deep.

To play the full game, you’ll have to head to the Hasbro web site for the advanced rules (really guys, you couldn’t include this in the booster packs?). The full game is much deeper, think Star Wars Destiny, but with Autobots and Decepticons. You make a character deck limited by the number of stars printed on a card’s alt mode and the card itself (you can only have 25 stars total, no duplicate characters). Then, you build a deck of 40 battle cards, with the only restriction being you can’t have more than 3 of a card in a deck.

Once you have your deck built, you place your characters in front of you, just like with the basic game, and draw three cards. The difference this time is that you get to use the powers printed on the cards. At the beginning of each turn you can bolt an upgrade to a bot (each can have one weapon, armor, or utility), play an action that will give your characters a temporary boost (or damage your opponent), and change one of your characters from bot to alt mode (with the first round exception that turn one player can’t play actions or upgrades and the turn two player can only play one action or upgrade on their turn).

With housekeeping done, it’s time to attack. You choose an untapped character and attack a tapped character (or any, if there are no tapped targets). You then tap your attacker and flip a minimum of two battle cards (this can be boosted in a number of ways). The defender does the same. Like before, you add orange icons from the battle cards to your damage, they add blue icons to their defense, and the difference is the amount of damage that gets through. After you attack, if your opponent has untapped characters, their turn starts and the cycle starts again. Trade back and forth until everyone’s characters are tapped. That’s the end of the round. You start the next by untapping everyone that’s left and starting again. Keep going until one player’s characters are completely KO’d.

Is it Worth It?

If the Transformers TCG was just the starter set and basic rules, I would have been disappointed. While the cards are gorgeous, the basic rules do a disservice to the game. But once you build a proper deck and download the advance rules (again, these really need to be printed out somewhere), the game takes off.

Alt modes are what make the Transformers TCG even more interesting, Most characters have a special power (or two) depending on what mode they’re in. Some, like Dinobot Sludge, act like damage sponges in their brontosaurus mode, pulling hit counters off of their teammates. Others, like Barrage, allow you to flip more cards when attacking in bot mode or immediately add more damage (regardless of defense) in insect mode. There are tons of synergies among characters (and with certain battle cards).

There are discrete factions among the Autobots and Decepticon that ultimately count more than to whom your characters pledge loyalty. Wave 1 has Dinobots, Insecticons, cars, motorcycles, trucks, tanks, and planes. While you don’t have to, you’ll find some of the best character and battle card synergies when you field a unified deck of characters (though the fact that a full team of Dinobots is over the 25 star limit hurts me deeply). Dinobot decks deal huge amounts of damage and are able to burst for even more damage with the right battle cards, with Sludge pulling and healing damage for the group. Planes enjoy tremendous damage bonuses for fielding a fleet of swift (but ultimately squishy) characters that can quickly pepper your opponent’s entire team, knocking them down incrementally each round. There are battle cards that reward certain types of characters as well, giving ranged, melee, or specialist characters well-timed boosts.

The trick, then, is going to be finding synergistic combinations among your cards (and not just fielding your favorite characters). Even though your only restriction is the number of stars you have available, you’ll want to choose carefully. While a deck can be legal in the broadest sense, if you don’t tune it to take advantage of how your cards work together, you’ll miss out. And with cards this gorgeous, it’s a lot of fun figuring out who to field, when to use their alt modes, and when to power up.

If you’re a collector, there will be a robust aftermarket for you to find your favorite characters. If you’re a player, you’ll be rewarded for hunting down those rare character cards. They’ll take up a lot of room in your roster, but the benefits they give your team are worth it.

The first official Transformers Trading Card Game is everything I hoped it would be. The art is amazing, the characters are pulled from every aspect of the fandom. At the same time, I’m impatient and want there to be even more, right now. With a Decepticon starter deck and Metroplex challenge deck in the works, it’s obvious there will be a lot of depth to the game. At launch, however, that depth is only going to be accessible to those who are willing to put money into booster packs.

My recommendation is to grab an Autobots Starter Set and one booster box. That will give you plenty of characters to choose from and give you access to some deeper play strategies. Especially if you’ll be playing this with your kids, you’ll want to have a deeper pool of cards to choose from than the starter box provides to craft more advanced decks. Besides, who doesn’t want more Transformers?

Thanks to Hasbro for providing an Autobot Starter Set and two booster packs for this review. Opinions are my own. 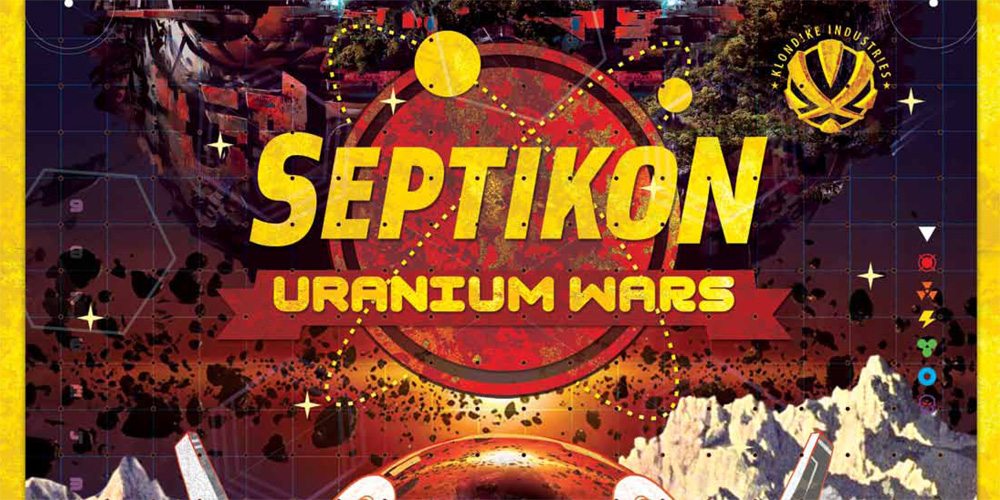