Ray: After an epic, multi-year run, all good things must come to an end in Bombshells United #19. Bombshells United, and the series that preceded it, Bombshells,  comes to a close in this issue that spans decades, with two stories by longtime artists Aneke and Marguerite Sauvage that span dozens of characters in gorgeous, seamless fashion. T

he first segment covers the end of the war, as Zatanna is saved from the magic of Joker’s Daughter and is reunited with her family. John Constantine as a loving partner and father? I guess anything can happen. With the dark magic gone, the Bombshells are able to supervise the end of the war and restore peace to Europe. Kate and Maggie are finally reunited, and Kate puts her past to rest and embraces her happiness with the woman who was there for her since the beginning (in a gorgeous panel that became the subject of DC’s Pride Month art on Twitter on June 1st). This segment could have been the end as it was, but the creative team has one more treat in store for us because there’s still a lot of unanswered questions.

The final story picks up fifteen years later and focuses on an unexpected face – Bruce Wayne – who had a normal, happy childhood ever since Batwoman saved his parents from a mugger. However, he’s never been able to shake the impact the Bombshells had on him, even as they’ve mostly disappeared. He seeks out the only one he can find – Selina Bugatti, now retired and living in Gotham. She fills him in on the fates of the Bombshells ever since they disappeared from the public eye. Some, like Renee, are still searching for their place in the world. Others, like Miri, changed the world in their own way. And Kate and Maggie found happiness in a particularly sweet coda to their story. However, the Cold War is brewing, and there’s still work to be done – as it seems destiny still awaits Bruce in any universe. There’s a lot of little interesting touches in this final story – apparently, Luc Fuchs wasn’t exactly who we thought he was – and you’ll have a lot of fun discovering them on your own. As it ends, this remains one of the most unique, appealing, and well-thought-out alternate universes DC has ever created.

Corrina: I’m shocked the Bombshells universe exists at all, because not only is it a series with the DC Universe gender-flipped, it’s also a series where nearly every main character is openly LGBTQ.

If you told me that DC was going to okay such a comic series five years ago, based on a series of fun cheesecake figures which were reimaginings of DC heroines in World War II, and that this series would become progressively gayer, more progressive, and more feminist as the story continued, I would not have believed you.

It’s a ground-breaking story whose effect will likely be felt for many years to come.

But the ground-breaking aspect would have been lost without the quality fo the storytelling. Time after time, Bennett and the art teams handled a huge cast of characters, changes in settings, and epic battles with clarity, grounding all of these in the emotions that drove the series.

You can see that Bennett had an arc planned for Darkseid’s defeat that is skipped over in a page or two but that’s okay. What long-time readers want with this finale is to know the endings for the characters they love. Bennett gives them that and more, with glimpses of all the Bombshells who have appeared throughout the series, each of them in a place appropriate to who they are. It’s especially sweet to see Kate and Maggie’s happy ending, especially since regular DC editorial famously refused to allow them to be married in Batwoman‘s first series.

I love seeing a Bruce Wayne who was raised in compassion and love and that he’s inspired to be a hero by those emotions, something that flies in the face of the too-often-used “only tragedy makes a hero” mindset, most recently used in Tom King’s Batman.

I suspect this will be the first of many great things in comics for Bennett. And that, at some point, we will read more about the Bombshells in the future. 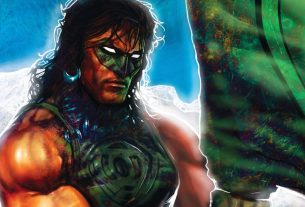