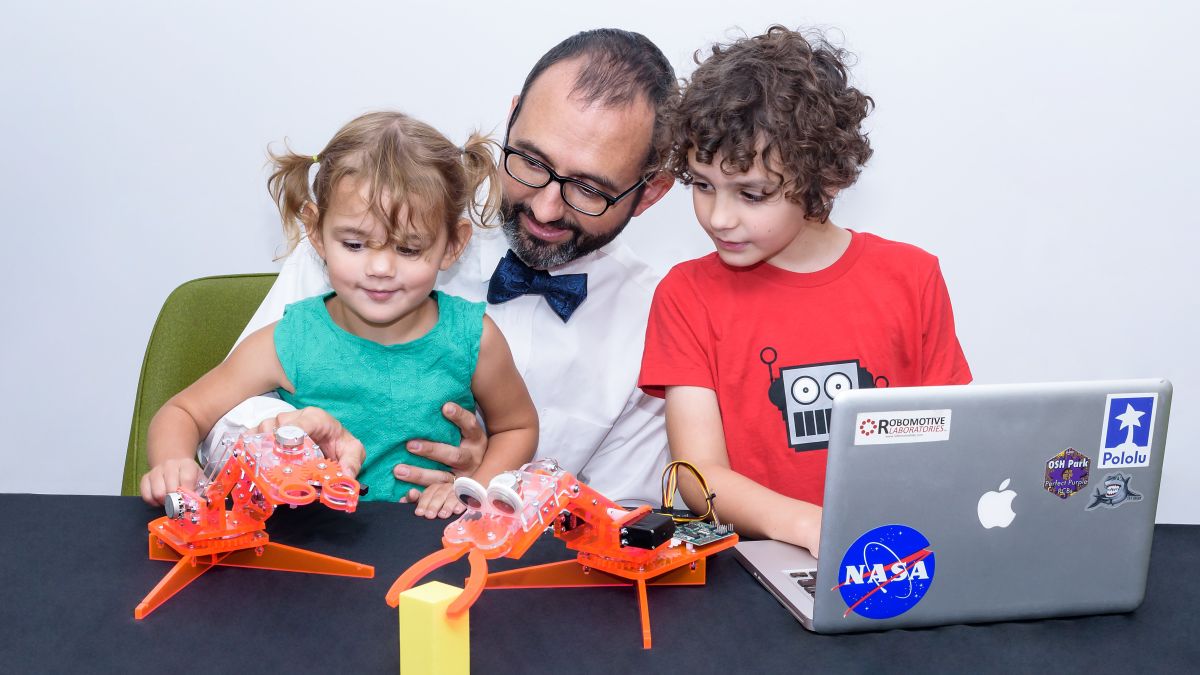 The friendly mimicArm robot gives feedback as you grip for an intuitive sense of touch.

The mimicArm is a robotic arm small enough sit on your desk that can be manually controlled or programmed. It is perfect for robotics enthusiasts of any age, and for educational use. The mimicArm was created by aerospace engineer Brett Pipitone, with his wife and kids assisting.

As a full-time robotics hobbyist and an occasional robotics educator, I was very interested when I heard about mimicArm. I’ve built and played with many robot kits over the years, but never one quite so deceptively simple and engaging. Manual operation via a controller that mimics your hand’s movement is easy for anyone to use, but the robot’s “Posi-Feel” grip sensory feedback is fairly advanced technology for a kit at this price point. More advanced users can explore the programmable mode and other input devices.

The mimicArm is well-constructed, easy to use and well, cute. The cuteness is due partly to the big googly eyes above the robot’s claw, but I think another reason is the natural movement of the robot. Because the arm is designed to follow a human operator’s motion from the controller, the arm moves with an organic feel that really brings it to life.

MimicArm is currently about 1/2 of the way through a Kickstarter campaign, so you should check it out.

Note that I received a prototype version of the mimicArm kit, so some things may vary slightly from the Kickstarter kits. I’ve been told the major difference will be in the electronics. My evaluation unit included the basic mimicArm kit listed above, plus the stacking blocks and the inputBox, so it is a little different from the available Kickstarter variations.

The mimicArm robot and Manual Controller are sturdily constructed from 1/4 inch or 6mm thick translucent acrylic, and come in a variety of colors. The servos, motors, potentiometers and other components all seem to be good quality as well.

My prototype mimicArm is connected to the Manual Controller via a bundle of wires, but this will be replaced by a ribbon cable in the kits delivered for the Kickstarter campaign.

There are a few ways to use mimicArm. The simplest way is under manual control. You can also use the inputBox for a variety of functions, and lastly, the robot if fully programmable.

Using mimicArm via the Manual Controller is as intuitive as it is deceptively fun. My 14-year-old son and I spent a few hours playing with it non-stop. The silly googly eyes on the mimicArm might lead to you believe this is a simple toy. Although it is fun, it is much more than a toy.

The robot can swivel side to side, bend forward and backward, and lift up and down. Potentiometers (variable resistors) on the Manual Controller are read by the Arduino-compatible microcontroller to position the mimicArm as you manipulate the hand controls.

A force feedback system in the gripper control uses a motor to provide resistance to the user’s hand through the scissor-like controller. When the robot grips something, this motor pushes back gently against your hand, giving you a sense of feel for how tightly the robot is gripping the object. Brett Pipitone, the robot’s designer, calls this “Posi-Feel”, and it works well enough that I didn’t realize what was going on until I did some reading and talked to him about it.

Manual control is fun, but it is not the only way to interact with mimicArm. Read on to learn about other modes of operation.

The mimicArm kit I was provided with came with an inputBox, which is roughly 4-3/4 inches wide by 3-3/4 inches high, and includes sensors and controls for the mimicArm. There is an LED indicator, 4 red buttons, a potentiometer, a force sensor pad, a microphone, and an infrared receiver for an included remote control. My mimicArm was pre-programmed with some behaviors to interact with the inputBox.

The inputBox attaches to the mimicArm with a ribbon cable. When the mimicArm powers up, you can press any of the red buttons, and it will now respond to inputBox instead of the Manual Controller. Two of the red buttons tell the mimicArm to swivel left-right, and the other two raise or lower the arm. The potentiometer moves the mimicArm forward or back, and the force sensor controls the gripper. A microSD card slot can be used for recording the mimicArm’s motions; these readings can then be used in programming the robot.

You can use the included mini remote control to switch modes back to using the Manual Controller. The remote also appears to have some other functions, but these are currently undocumented and left for the user to experiment with. The example code on my mimicArm should be close to what is delivered with the Kickstarter, but there may be some small differences.

As mentioned, the inputBox includes a microphone as well, but to use that you will need to do some programming. Which leads us to the next section of this review.

I didn’t try out the programmable mode, but the mimicrobots website includes an Arduino library, a programming reference, and example programs in both Arduino code and mimicBlock graphical environments.

The example programs include simple waving motions, as well as ones that use the robot’s sensors for more complex behavior. The robot can be programmed to sense when it has an object in its gripper, grab and drop an object into a bowl, and respond to external sensors like the inputBox and the Great Big Button.

If you have the infrared (IR) sensor for your mimicArm, you can program the robot to respond based on distance sensing. Included example programs have the robot either attempt to grab an object placed in front of it, or to move away from it.

Starting from the included library functions and example programs, you can build up more complex behaviors with your mimicArm. The website includes education resources and references to help.

Why You Should Get mimicArm

The mimicArm kits are perfectly suited for educators and robotics enthusiasts, and are great for learning or teaching students of any age. The kits are well designed and constructed, and easy enough to maintain or repair in case of incident. The servos, motors, and other electronics are standard parts that can easily be replaced if damaged.

I run a robotics program for a small volunteer children’s museum, and I will definitely be integrating this kit into the program. Using the Manual Controller, a child needs almost no instruction on how to use mimicArm. The inputBox and programmable modes offer opportunities to expand the use of mimicArm in many ways, so this is a kit that can be adapted to different learning goals.

You can tell that mimicArm was created as a labor of love by someone who wants to share their creation with the world. So check out the Kickstarter before it ends!

The basic mimicArm kit is listed at the mimicrobots website online store for $199. However, at the time of this writing, most of the kits were listed as sold out. So your best bet is to back version 2 of mimicArm on Kickstarter, where the basic kit is $139. 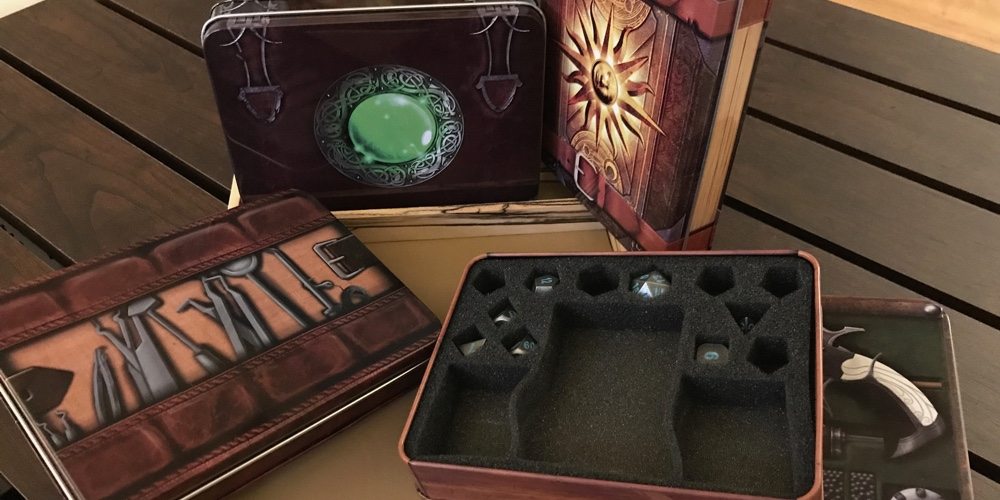 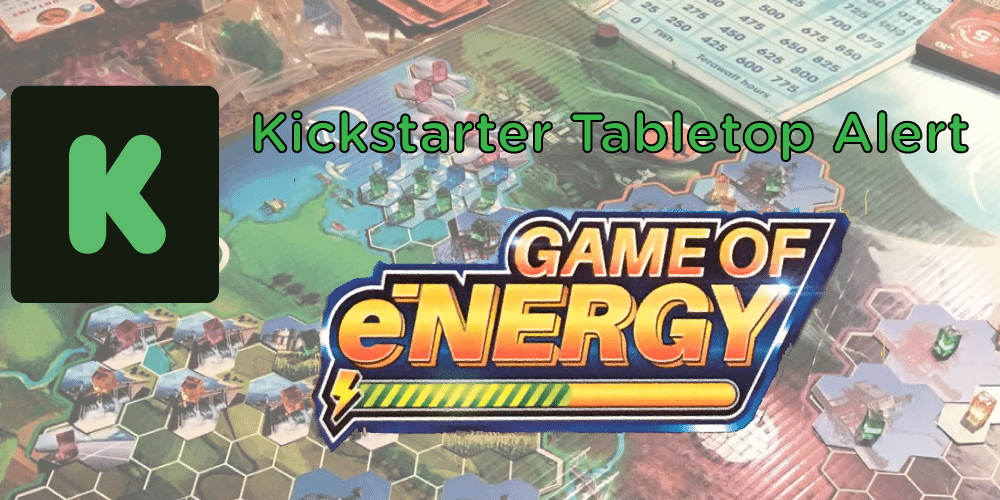