Ray: Of all the week’s specials, Super-Sons/Dynomutt and the Blue Falcon Special #1 is the one that feels like it could be an issue of the regular series its hero comes from. Written by regular Super-Sons writer Pete Tomasi and featuring one of Hanna-Barbera’s original costumed superheroes, it fits pretty seamlessly into the world of DC. Opening with a flashback to the origin of Blue Falcon and Dyno-Mutt, it shows a young Radley Crowne as his parents pull him out of his robotics lab with the introduction of a friendly young puppy. He and that dog become close friends, as the dog becomes his only companion when his parents are murdered, he drops out of college and becomes more and more obsessed with his work. Time marches on, the dog becomes sick, and Radley performs a twisted experiment to keep his best friend with him. Meanwhile, Jon is forced to confront death for the first time when an old mentor of Lois’ dies, and the funeral makes him so uncomfortable that he cuts out and decides to go on patrol with Damian instead.

It’s not long before they encounter a seriously damaged Dyno-Mutt, who was nearly destroyed when Blue Falcon turned on him. In this story, Dyno-Mutt and Blue Falcon are both associates of Batman and Robin, and while the tone of the story is darker, the characters are pretty authentic to their appearances in Scooby-Doo Team-Up. In fact, both plots had Blue Falcon being seemingly possessed! Here, though, the culprit is much darker – an arch-nemesis named Red Vulture, whose grudge against Blue Falcon is long-standing and surprisingly based in reality. This version of Blue Falcon is not an entirely stable man, and without the influence of someone like Alfred, it makes sense that he went off the deep end after the losses he suffered. Damian and Jon’s partnership is smoother than it is in the main book, and the full-length story (no backup here) has an intriguing ongoing theme of coming to terms with death and loss. Damian never had any real choice, but Dyno-Mutt and Blue Falcon never quite got there. The cycle continues. Fun, cheery stuff from a book about a talking robot dog, but surprisingly well-written!

Corrina: With these specials, you can either choose to drop the sometimes ridiculous characters into the DC Universe and adopt that tone or toss the DC characters into the cartoon universe and adopt that more lighthearted approach. The ones I liked this week, especially this one and Black Lightning/Hong Kong Phooey, adopted the first approach. Who knew a talking kung-fu dog and a mechanical dog would fit so well into the DC Universe?

All the background on Blue Falcon and Dynomutt worked incredibly well, to the point where I almost felt like the Super-Sons were intruding on their story. But the star, of course, is Dynomutt, injured but faithful to the end, and, thankfully, he’s resurrected. (In case you want to give this one to the kids, it all ends okay.)

My one quibble is using the regular funerals in this issue. Jon’s seen a world die and Tomasi knows this, so I’m not sure I buy Lois and Clark wanting to expose their son to this particular human ritual at this time. But that’s a small thing and doesn’t interfere with the rest of the story. 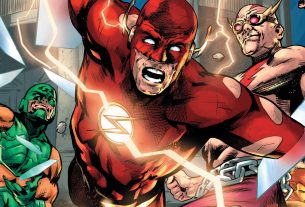