Ray: Unfortunately now announced to be ending after only six issues, Gotham A.D., the reinvention of Mother Panic‘s core concept continues to be one of the best books in the Young Animal line. Stranding Violet Page alone in a post-apocalyptic Gotham City that has put many of her worst enemies in positions of power, Mother Panic: Gotham A.D. #3 sends her into Arkham Asylum to find her mother. Her mother, by the way, happens to be known as the Oracle in this world and seems to have powers of prophecy. Arkham in this world has been reinvented as a place of healing, but that belies a much darker heart thanks to the sinister control of Gala. As Violet makes her way through the institution, she eventually finds a captive that illustrates the disturbing side of this new Arkham in graphic fashion. However, the issue’s art style shifts drastically when it turns to Violet’s mother’s cell – a candy-colored suite designed to put her at ease.

There’s a duality to this issue that really works, contrasting the horror of Gala’s true Gotham with the face she presents to the public. As Violet tries to help her mother escape, the issue kicks off its big action segment, as Violet goes up against the entire staff of Arkham. It’s only when Fennec Fox shows up that the tide of the battle turns – and can I start a petition for Fennec Fox to escape the realm of Young Animal and eventually meet some other kid heroes her age? I think she might be one of the few characters to hold her own against Damian in a battle of snark! There are multiple great twists in the last few pages, including the arrival of a major Bat-character and a mind-bending last-page reveal. And don’t miss the sweet, tragic backup that shows how Harley and Ivy’s relationship in this twisted world played out and eventually ended – in a sense.

Corrina: Fennec Fox strikes me as a twisted DC Universe version of Nimona, the murderous assistant that’s the star of Noelle Stevenson’s series. Let’s hope Fennec has a happier ending than Nimona.

Mother Panic has thrived, creatively, with the relaunch from the “Milk Wars” event, allowing the creative team to create their own version of Gotham where Mother Panic feels desperately needed. In regular Gotham, she was yet another vigilante. In her own realm, Violet has her own angle that is different from any other Gotham hero. (Well, anti-hero at least.) Plus, this is a terrific Gotham Elseworlds, too, and, um, I kinda don’t even mind the Joker here.

The artwork shifts from Gotham gloomy to gloriously weird, especially with Fennec Fox’s rescue. I’m going to miss this a ton and I beg again for someone to give Houser a Gotham book. 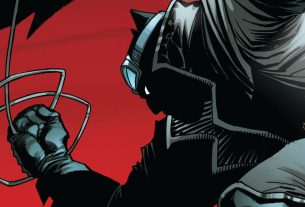