Ray: The first part of Rob Williams’ Herculoids-themed Future Quest arc saw young Dorno, frustrated with his parents’ strictness, unwittingly cut a deal with the trickster God Animan that aged him to a man – at the price of also aging the planet of Amzot, setting it into a death spiral that he and his non-human partners are desperate to escape. The majority of this issue is a high-speed race to survive, brilliantly illustrated by Aaron Lopresti. Even though Dorno is the only character who speaks in human language, Williams does a good job of capturing the bond between Dorno and his pets/partners. However, this is a comic with stakes, and not everyone makes it out. Igoo and Zok make sacrifices that remove them from the story, although their ultimate fate is still unclear, and one of Gleep and Gloop is seriously injured by an exploding volcano. Despite this, Dorno keeps pushing forward, trying to get to safety.

There are quite a few great moments in the issue, such as when Dorno rescues a baby beast from the same species as the late Tundro, trying to make up for his unwitting role in Tundro’s sacrifice. There were complaints that Dorno was whiny last issue, and I think that might have been the point. This issue is all about him coming to terms with what he’s lost and becoming a grown-up, building to his tense reunion with Animan. The last issue made Animan seem like a sadistic villain, but this issue hints at something different. I almost get the vibe of a Mr. Mxyzptlk-type character here, whose morality is so afield from human minds that it’s hard to understand. The twist he drops on Dorno at the end of the issue sets up a strong final issue, as Dorno – who had just gotten used to being an adult – has to field yet another evolution. Probably my favorite DC work of Williams’ overall.

Corrina: I found little interesting about Dorno’s character journey this issue, as it seems inevitable that the reset button will be pushed on the world and Dorno will have learned a lesson. (TM)

But I found the art to be consistently amazing. Lopresti and the rest of the art team had so many different animals to draw, at least two rescue sequences, escape from lava, a sea battle, and a battle with robots. They’re all amazing to look at and added some weight to Dorno’s rather slight story. 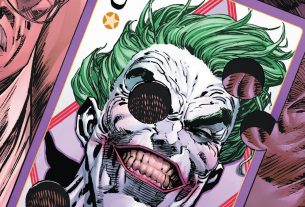 Review – The Joker #2: Secrets and Lies