I’ve been reading a bunch of comics lately, so many that I can’t fit them all into one column! But I’ll dig into some of them today, starting with those for younger readers and middle grade readers. Here are ten titles that I enjoyed! 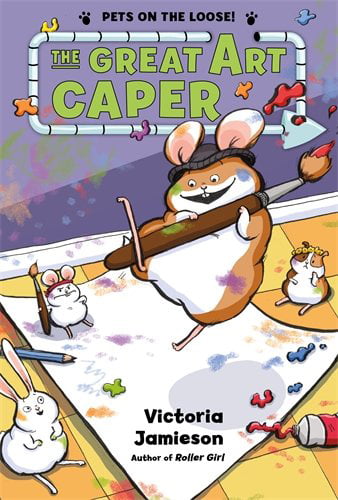 This sequel to The Great Pet Escape (see this Stack Overflow) continues the story of GW, Sunflower, and Barry, three elementary school classroom pets. GW (the hamster) has made a new human friend, and is excited for an upcoming art show featuring her artwork, but Harriet the mouse, their nemesis, has cooked up a dastardly plan to ruin the art show—and get rid of GW! Can the three animals save the art show?

What makes this series fun is taking the caper genre and setting it in an elementary school, telling the secret lives of classroom pets. GW’s the the brains, Sunflower the guinea pig is the brawn, and Barry the bunny is … the bunny. They each have their own set of skills, and they’ll need all of them to foil Harriet’s schemes. 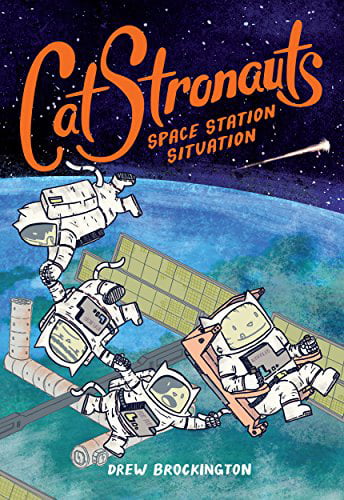 The third volume in the CatStronauts series (see here for the first two) puts the team on the International Space Station on a mission to repair the Hubba Bubba telescope. But they’re plagued by intense meteor showers, resulting in limited communication with Mission Control, not to mention some other catastrophes. And that’s not the only surprise in store for these cats…

The book is filled with suspenseful situations and a colorful crew of felines—it’s pretty goofy, but a fun kids’ book. Although it’s not scientifically accurate, it does celebrate space exploration, teamwork, and clever engineering solutions. The fourth book, Robot Rescue, is just out now, though I haven’t gotten to it yet myself. 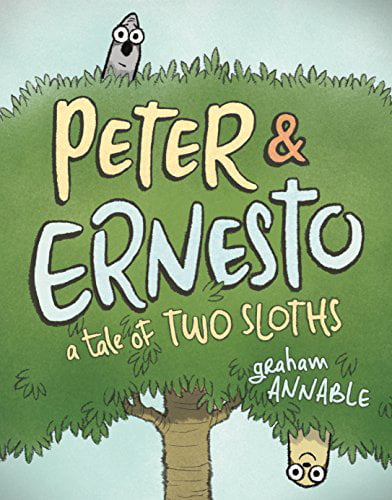 Peter & Ernesto: A Tale of Two Sloths by Graham Annable

Peter and Ernesto are two sloths who have lived in the same tree for their whole lives, staring up at the sky and looking for cloud animals. When Ernesto gets a hankering to see all of the sky—to look at it from different places—Peter tries to convince him that it’s too dangerous. And eventually, Peter worries so much that he sets out to find Ernesto.

Despite the fact that the two sloths have such different personalities, they both end up having exciting adventures when they leave the tree, meeting lots of different animals (and seeing different pieces of the sky). And they eventually do arrive back home to their tree, with a better appreciation of the world around them.

Graham Annable and his friend Joe Schmidt wrote a guest post a few weeks ago about making a Peter & Ernesto diorama for a local bookstore. The book is really delightful, encouraging curiosity and depicting a fun friendship between two sloths who may not always see things the same way. 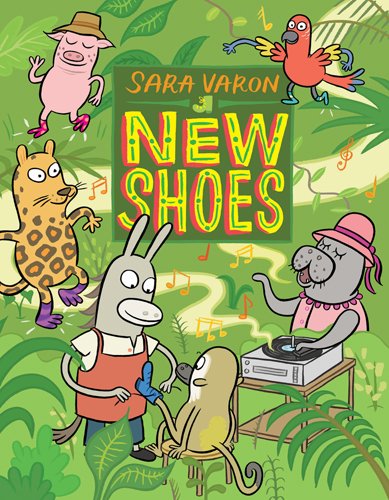 Sara Varon’s latest comic book is about Francis the donkey, a shoemaker known for using the best materials to make fantastic shoes. When he gets a special order from his personal hero Miss Manatee, the queen of calypso, he’s very excited, until he realizes that he’s all out of tiger grass, usually delivered by his friend Nigel the spider monkey. Come to think of it … he hasn’t seen Nigel in a while. So Francis sets off from his village for the first time with his macaw friend Rhoda, and the two encounter the flora and fauna of the South American jungles.

I suppose it’s not entirely unlike Peter & Ernesto, in that it’s about an inexperienced traveler who is seeing the world for the first time. In this case, Varon introduces us to many of the actual plants and animals found in South America. Francis and Rhoda do eventually solve the mystery of what happened to Nigel, and even learn a little bit about ethical business practices—where materials come from. It may seem funny to talk about fair trade in a comic book for kids, but it’s done in a way that is simplified and easier to understand, with a happy conclusion for everyone.

And then there’s also a fun ending to the story about making shoes for Miss Manatee, too … but I’ll let you read the book to find out what happens! 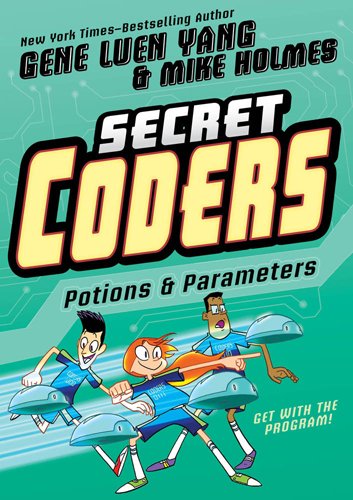 The Secret Coders series is back with its fifth volume, and things are getting intense! Hopper, Eni, and Josh figure out Professor One-Zero’s plan to make the whole town “happy” with his Green Pop potion, but not before he gets the best of them and steals the Turtle of Light. How will they stop him? With some more secret coding, of course.

The kids use Logo-style programming to solve problems, and each book introduces some new concepts, like repeating functions, drawing circles instead of just straight lines, and polygons. This volume also has a reference to Flatland, one of my favorite books, and I enjoyed the way that it worked into the story. I always feel like these books end too soon, and we’re already eagerly waiting for the next one! 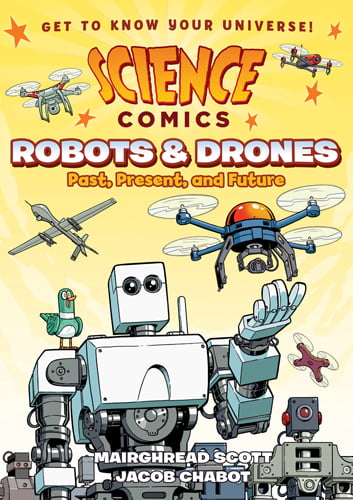 First Second Books’ Science Comics series are a great way to dig into various subjects through comics. Robots and Drones is the newest title in the series, and it covers a long history of robots and drones (starting with definitions of what “robot” and “drone” mean). The narrator of the book is Pouli, the first ever flying machine, a mechanical bird invented by Acrhytas in 350 BCE.

The cartoon Pouli uses the fairly broad definition that a robot is a machine that can sense and respond to something in its environment, which then helps to connect the dots between al-Jazari’s automata to the Jacquard loom to our modern-day computers and smart devices. The book touches on everything from automatic coffee makers to Alexa to self-driving cars, and also has a list of 25 significant robots, arranged chronologically.

For any kid who’s interested in robots, drones, and computers, this is a fascinating overview of the subject, and is done with both humor and accuracy. 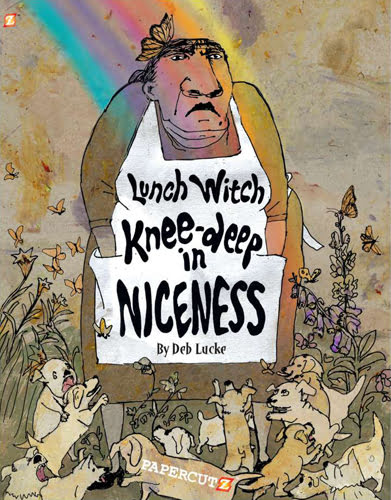 This is the second book in the Lunch Witch series. Some kids suspect the lunch lady is actually a witch who’s just out to make their lives miserable … but in this case, it’s true. Grunhilda is an actual witch who works in the school cafeteria. She steals erasers from the supply closet and chops them up for her pork and beans. Her pets include some bats and a spider, and her dead witchy ancestors reside in her basement, expressing their displeasure by knocking on her floorboards with their brooms.

But Grunhilda has a secret (minor spoiler about book 1): she actually befriended a kid, who now corresponds with her. Her pets (including her dog) find out and decide to stage an intervention, casting a spell from her magic book … but unfortunately the spell goes wrong and Salem is filled with euphoria and happiness—making Grunhilda’s ancestors displeased indeed. There’s also a funny side plot about Scout, a boy scout who is trying his darnedest to earn a merit badge but keeps getting thwarted by old women who don’t want help crossing streets or injured people who don’t want his help.

The illustrations may seem an odd fit for a kids’ comic book—they’re somewhat grotesque and the background is a dull grey-brown, but kids may enjoy the dark humor about a protagonist who is doing her best to be the worst. 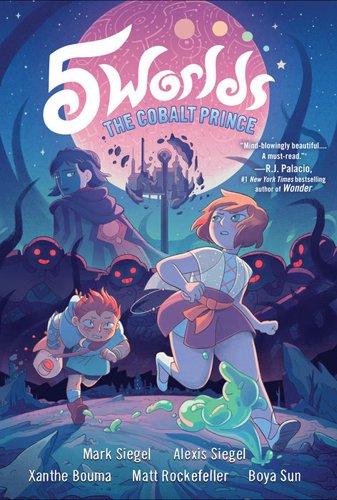 This is the second book in the 5 Worlds series (lots of sequels today!), so if you haven’t read the first book yet, you should check out my review of The Sand Warrior from last year, and skip this segment because it may have spoilers from the first book.

At the beginning of this book, Oona Lee, An Tzu, and Jax Amboy are stowed away on a spaceship, headed to the planet Salassandra, where they hope to continue lighting the beacons. The Toki are in pursuit, wanting Oona’s power to summon the living fire for themselves. There were a lot of questions raised in the first book, but the biggest is how Commander Zayd ended up with the blue-skinned Toki.

This volume answers many of the questions, with flashbacks that fill in some more of the back stories for Oona and Zayd. Oona gets conflicting explanations about the beacons and the ancient Felids who created them—one side tells her they need to be lit to save the Five Worlds, and the other tells her that lighting them will bring destruction. Who will she trust, and how will she find the answer?

My daughters and I are really enjoying this series. The artwork is beautiful, and the worlds are filled with fascinating characters and creatures. I love the way that you learn about the world’s ancient legends, and how things are gradually revealed. We can’t wait to see where this goes next. 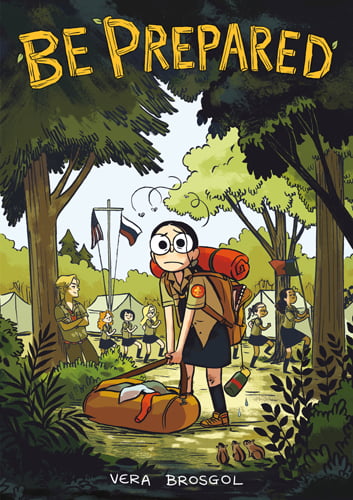 Be Prepared by Vera Brosgol

Then she found out about the Organization of Russian Razvedchiki in America (ORRA), a summer camp for Russian kids. Finally, a camp that she could convince her mother to send her to. She could finally go to camp, experience all the wonderful things her classmates did, and come back with her own stories to tell at sleepovers. Best of all, at a Russian camp, she would finally fit in!

Or so she thought.

As it turned out, camp was hard. She had terrible tentmates. She didn’t know the words to the songs. She hated using the latrine. She worried that she was going to die from rabies from a chipmunk bite. And she didn’t feel like she fit in. But, eventually, Vera figured some things out, and achieved some minor victories. She made some friends.

Be Prepared is both funny and painful to read. I remember what it felt like not to fit in, and I’ve never been fond of camp latrines (and many of the other inconveniences of camping) either. I enjoyed learning a little more about Russian culture, and also seeing young Vera find her strengths. While the book isn’t entirely true, it’s based on Brosgol’s actual experiences at camp over two summers, with details tweaked and massaged to make a better story. 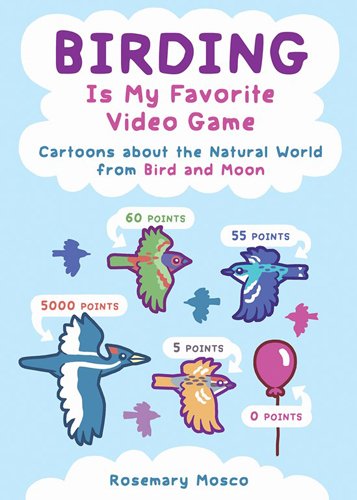 Birding Is My Favorite Video Game by Rosemary Mosco

Rosemary Mosco’s webcomic, Bird and Moon, takes interesting facts about science and mixes them with a bizarre sense of humor to create something both entertaining and enlightening. This book is a printed collection of her comics, with all sorts of fascinating facts and “facts” about biology, from the strange mating ritual of the newt to the somewhat disgusting source of that fresh earthy smell after it rains. The illustrations go from cartoony to scientifically accurate, and it’s fabulous. If you like science and nature, you’ll enjoy these!

I’ll note that Birding Is My Favorite Video Game isn’t specifically targeted at kids (the way the rest of the books in this column are), but it’s appropriate for middle grade readers and up.

Like I said, I’ve been reading a lot of comics lately. I had read the first two books in Jeff Vandermeer’s Southern Reach Trilogy and started the third, but although I was enjoying the books, they’re pretty dense and I fell behind in other reading for a while. I put book three on hold for a little bit, and started catching up on comics—some old, some new.

I’ve plowed through a bunch of recent Oni Press titles, finally read my Kickstarter-backed hardcovers of Sithrah, and also picked up the most recent trade paperbacks of The Lumberjanes, Ms. Marvel, and The Unbeatable Squirrel Girl, since my daughters and I are all fans of those series. I actually read so many (added on top of some I finished previously) that my stack of comics to review just about reaches knee-high. So, expect to see a few more comics-themed Stack Overflows in the coming weeks!