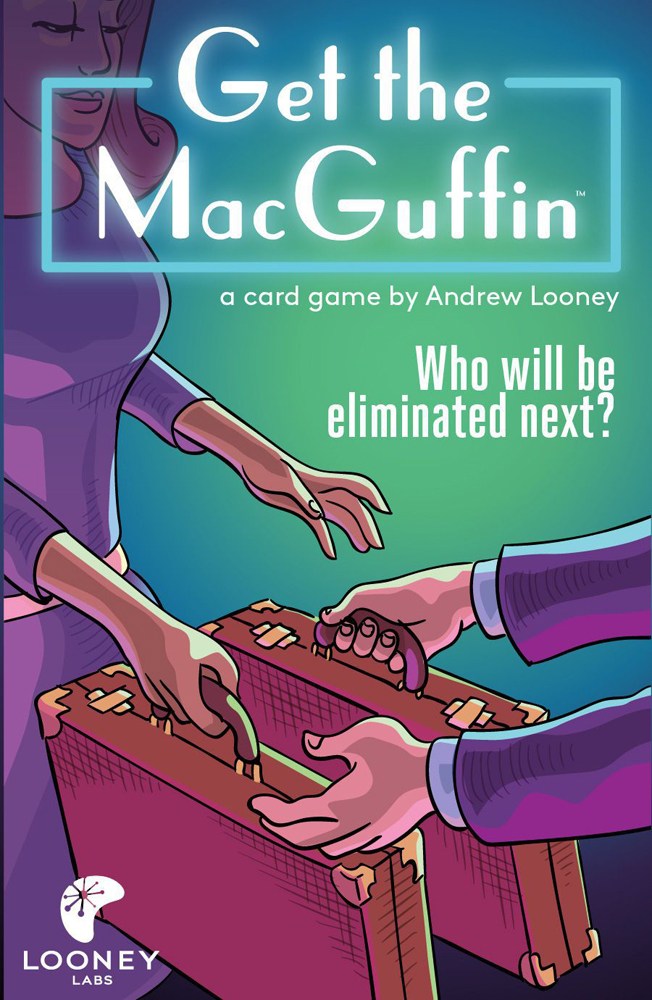 MacGuffin
/məˈgəfin/
noun
an object or device in a movie or a book that serves merely as a trigger for the plot.

What Is Get the MacGuffin?

Get the MacGuffin is a Looney Labs game for 2 to 11 players, ages 8 and up, and takes about 10 minutes to play. It’s available now in stores, from online retailers like Amazon, and directly from Looney Labs, with a retail price of $10. The game is fairly easy to play, so the primary requirement is the ability to read and understand the cards. Thematically, the game has a bit of a spy-movie theme, and does include an assassin character, so it may not be appropriate for very young players, though the theme has a fairly light-hearted presentation.

Get the MacGuffin Components

Get the MacGuffin comes in a small tuckbox with a tear-off hang tab, and inside are 23 Tarot-sized cards, along with a single folded rulesheet. The cards have fun, colorful artwork that’s a departure in style from their Fluxx games, and the large cards show off the artwork nicely. Some of the cards do have quite a bit of text on them, and the font size is smaller on the cards with a lot of text.

Across the top of each card is a banner marking the card as an action or an object.

How to Play Get the MacGuffin

If you have no cards, either in your hand or on the table in front of you, you’re eliminated immediately. The goal of the game is to be the last player in the game.

Shuffle the deck and deal each player the same number of cards, no more than 5 cards. Put any remainder aside without looking at them.

Starting with the player left of the dealer, each player must take one of these actions:

Generally discarding an object is a last resort, and is used when you have nothing else in your hand and none of your objects are currently valid to use.

The game proceeds clockwise, with each player taking an action.

The game ends when there’s only one player left in the game—that player wins!

Why You Should Play Get the MacGuffin

A “MacGuffin,” as I shared at the top of the post, is the thing that drives the plot—it’s a term popularized by Alfred Hitchcock, and it’s often not particularly important what the thing is or why people want it. The point is, people are after it, which then drives the plot as everyone tries to get it. In Get the MacGuffin, the MacGuffin is a mysteriously glowing briefcase (much like the one in Pulp Fiction), and although you don’t know what’s in it, you know you want it—not because you win the game when you get it, but because having it makes it most likely that you will win eventually.

If you’re familiar with Looney Labs, you most likely have played their most well-known title, Fluxx (in one of its many flavors). Fluxx is a wacky game, where the cards you play change the rules of the game as you play. It’s a light, casual game that can be heavy on luck and, while entertaining, can also be frustrating when a game goes on too long because nobody can manage to achieve the goal (which keeps changing).

At first glance, Get the MacGuffin seems like it’s going to be another flavor of Fluxx: it also has green-bannered cards that you place on the table in front of you, and blue-bannered cards that are actions, and some wackiness like taking everyone’s cards and shuffling them up. There are totally silly cards that have you shrug or flash a peace sign—basically just cards that don’t do anything useful except take up space in your hand and give you one more turn.

But, as it turns out, there are some key differences in Get the MacGuffin that set it apart from Fluxx. For one, the game has an inevitable end, so that 10-minute estimate game length tends to be fairly accurate. You’re generally playing one card per round, with a maximum of 5 cards in your hand to start, and there are only a few ways of getting around that. So the game will end, keeping it from overstaying its welcome if you have players who don’t enjoy the silly portions of the game.

The goal of the game never changes: it’s to stay alive the longest. And, as it turns out, the MacGuffin is an object that keeps you alive, if you can get it. Its ability is that—if you have no other cards at all—you can pick up the MacGuffin and play it again. Of course, because that’s all it does, other players will be trying to take it from you if they can.

The fun part of the game is using the other action cards and objects to figure out where the MacGuffin is, and then get your hands on it. You might be able to peek at somebody’s hand; take random cards from other players or the discard pile or the cards set aside during setup; exchange hands with a player or have everyone pass cards in a direction of your choice. There’s a Backup MacGuffin that works the same way as the real MacGuffin … until the real MacGuffin shows up.

And, of course, you may not know if the MacGuffin is even in the game—it might be one of the cards that was set aside. With 23 cards, it guarantees that no matter how many players you have, there’s always a remainder. (The exception is that there are promo cards available—Andy Looney gave me a Fist Bump card at a local con this weekend, which brings the total to 24 and makes it possible to have no remainders.)

Once you know all the cards in the deck, you can start seeing how they can work nicely together. The Crown object lets the owner pass on their turn unless the MacGuffin is in play, so it’s one way to draw out the MacGuffin because other players don’t want you to get free turns. The Assassin action discards the Crown. The Money object can be discarded to buy another object or a card from somebody’s hand.

Throughout the game, there are lots of cards changing hands and getting discarded, but since there are only so many cards, the game is over quickly no matter what, and you can deal out another round. Luck is a factor, of course, but even if you start the game with three silly cards, chances are pretty high that you’ll end up with something better before the game is up because other players may have cards that shuffle everything together or pass cards.

I’ve played Get the MacGuffin with a variety of different players, including some who love Fluxx and some who really don’t like Fluxx at all, and both groups tended to be positive about Get the MacGuffin. It still has some of the Looney Labs’ signature goofiness, but with a clever theme and a hard limit on how long the game will last. Now, I won’t claim that it’s going to be satisfying for your hardcore Eurogame fans, or that it’s a game that you’ll want to play for hours at a time, but it can be a fun way to kick off a game night because it can accommodate such a wide player count, and even though it has player elimination, nobody’s kept waiting for too long before the game ends.

If you hate Fluxx, you may find it surprisingly fun (or, at the very least, more tolerable). If you’re a fan of Fluxx, you’ll most likely enjoy Get the MacGuffin as well. I had a fun time showing it at GameStorm this past weekend and found it was a great game to fill in the gaps between games while we were figuring out how many players we would have for the next longer game.

Look for Get the MacGuffin at your local game store! 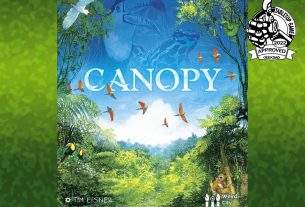 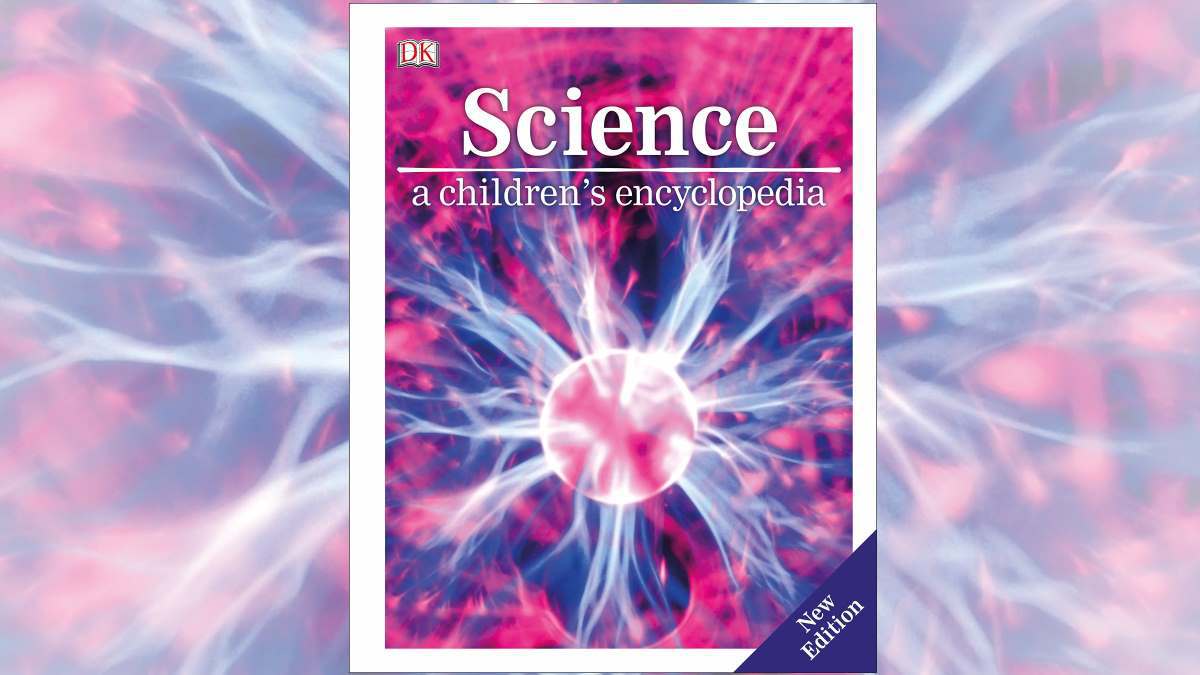