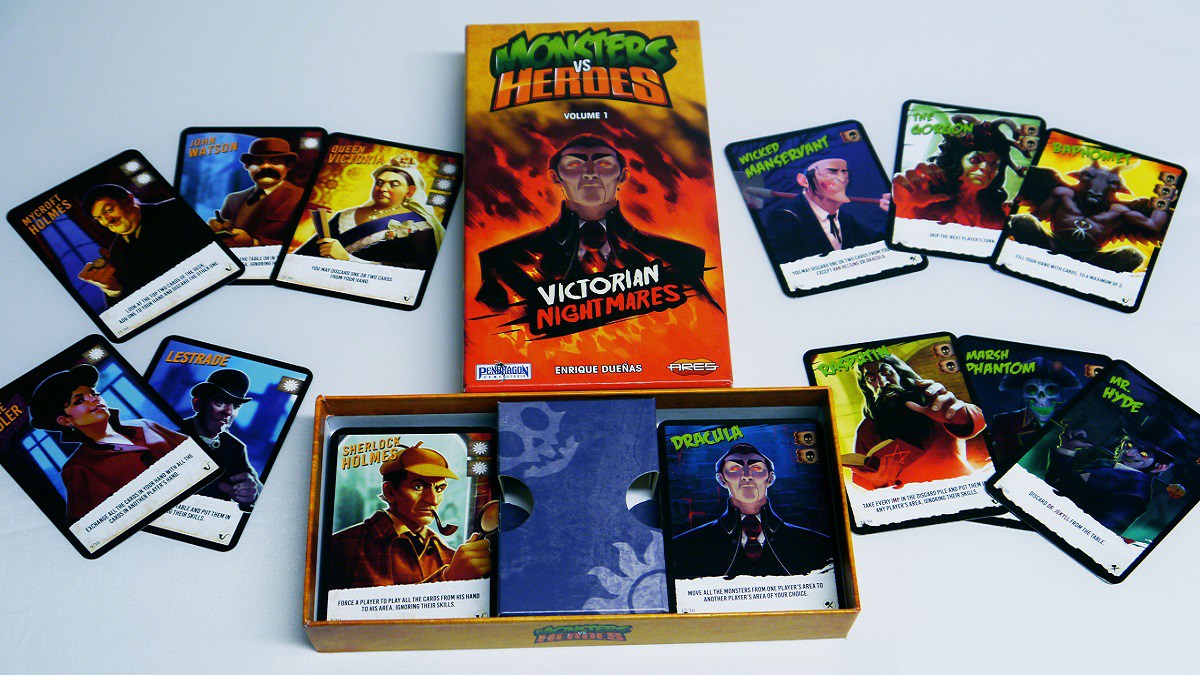 The battle for Victorian London is on! The iconic city’s cobbled streets have become overrun with villainous fiends battling against valiant champions, and it’s up to you to see who will end up victorious in Monsters vs Heroes: Victorian Nightmares.

What Is Monsters vs Heroes: Victorian Nightmares?

Monster vs Heroes: Victorian Nightmares is a turn-based card game where you play as either a hero or a monster and gather as many allies as you can. The Victorian Nightmares edition is volume one of no-doubt many more to come and features classic villains and heroes that the fit the theme. It is suitable for two to eight players of varying ages and experience, from eight to adult. It takes about 20-30 minutes to play, depending on how many people are playing, but if playing with younger kids prepare for it to take a bit longer.

Monsters vs Heroes: Victorian Nightmares combines two themed decks, London After Midnight and Sherlock in Hell. The first includes well-known and classic villains from 19th-century horror fiction such as Dracula, the Gorgon, Baphomet, and Rasputin. They compete against heroes of the same era including Arsene Lupin, Van Helsing, and Henry M. Stanley. The second deck features characters from the Sherlock Holmes series as heroes and different hellish demons as villains. With one deck, the game is suited for up to 4 players, and last about 20 minutes. With two decks, up to 8 players can join it, adding about 10-20 minutes of gameplay.

The cards themselves are pretty sturdy and of good quality, although as with any playing cards, unless you take good care of them they are likely to get the odd blemish or knock, especially if younger players are involved. Unfortunately, this was the case with our set and one of the monster cards suffered some water damage around a corner and started to peel slightly.

The format of the cards comes in two types, there are either red-backed “faction” cards or blues backed “character” cards. The artwork for and illustrations for the cards are of a consistently high quality and are really evocative of the era.

How to Play Monster vs Heroes: Victorian Nightmares

The goal of the game is to score the most points by collecting characters and placing them into your area, avoiding cards of the opposite faction. Heroes want to collect heroes, monsters want to collect monsters.

Each player is dealt a faction card that determines whether they are a hero or monster. They keep the identity and allegiance a secret. They are then dealt three character cards which make up their hand. Before the first round, each player has the chance to keep or discard their hand, taking three more cards if they do. The remaining characters form the deck which players draw from on their turns.

The rules of the game are very simple. On your turn you can either play or pick a card, you cannot have more than three cards in your hand at any one time, and if you have three cards you must play one on your turn. The text on the card determines what happens when played, such as “Skip the next player’s turn” and “Move all the monsters from one player’s area to another player’s area of your choice.”

When you play a card, you place it into your area. At the end of the game, your score is determined by the symbols on the cards in your area. Heroes have suns and monsters have skulls. Some characters have more symbols than others.

The game ends immediately when the last card is drawn. The player with the highest score wins. A player scores one point for every symbol of their faction in their area and loses one for every opposing symbol.

As a bonus each faction card shows the name of two characters, they gain an additional two points if they have either or both characters in their area.

Why You Should Play Monsters vs Heroes: Victorian Nightmares

This is a fun, quick game that puts a light spin on the classic characters from Victorian London. It is great for kids who might be interested in Sherlock Holmes or other characters and themes from 19th-century English fiction. The rules are simple and easy to pick up, and when played with both decks simultaneously it will last from 20-30 minutes, depending on the number of players.

I really enjoyed the synergy between some of the cards, such as the Policemen and Lestrade, who collects all the Policemen in the game into his area, and felt that is a really good addition to the game which keep it interesting as you know that those cards are out there somewhere.

The monsters and heroes included in the Victorian Nightmares deck feel well chosen and considered, and the ways in which they interact with each other can be really fun. Especially the Dr. Jekyll and Mr. Hyde cards, which eliminate the other card when played. This makes playing one first a risky move as you never know if someone else has the counterpart.

For some, Monster vs Heroes is a bit simple and suffers from a lack of options on a player’s turn. Seasoned veteran gamers won’t be challenged by this game, and might think that some of the skills each character has may be arbitrarily chosen and have rather tenuous links to the actual character.

Also, this game suffers from what in my family we refer to as the “Risk Legacy situation,” whereby the instructions make the assumption that anyone playing the game belongs to the pronoun “he.” The Sherlock Holmes card, for instance, tells you to “Force a player to play all the cards from his hands to his area, ignoring their skills.” While this doesn’t affect the gameplay, it makes the game feel a little antiquated and not very up-to-date.

While seasoned tabletop gamers might find Monsters vs Heroes: Victorian Nightmares a little simplistic, it is a great introduction for younger players. We tested this game on a family holiday, playing games with just adults, just kids, and a mixed group of both, and the best results were when the kids were involved. I enjoyed this game and will definitely play it again.

Save Your Nuts or Perish–‘Squirrel or Die’ Review 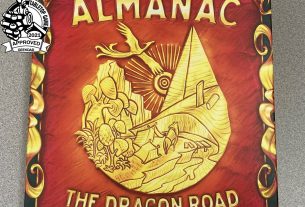 Lead Your Caravan to Riches in ‘Almanac: The Dragon Road’