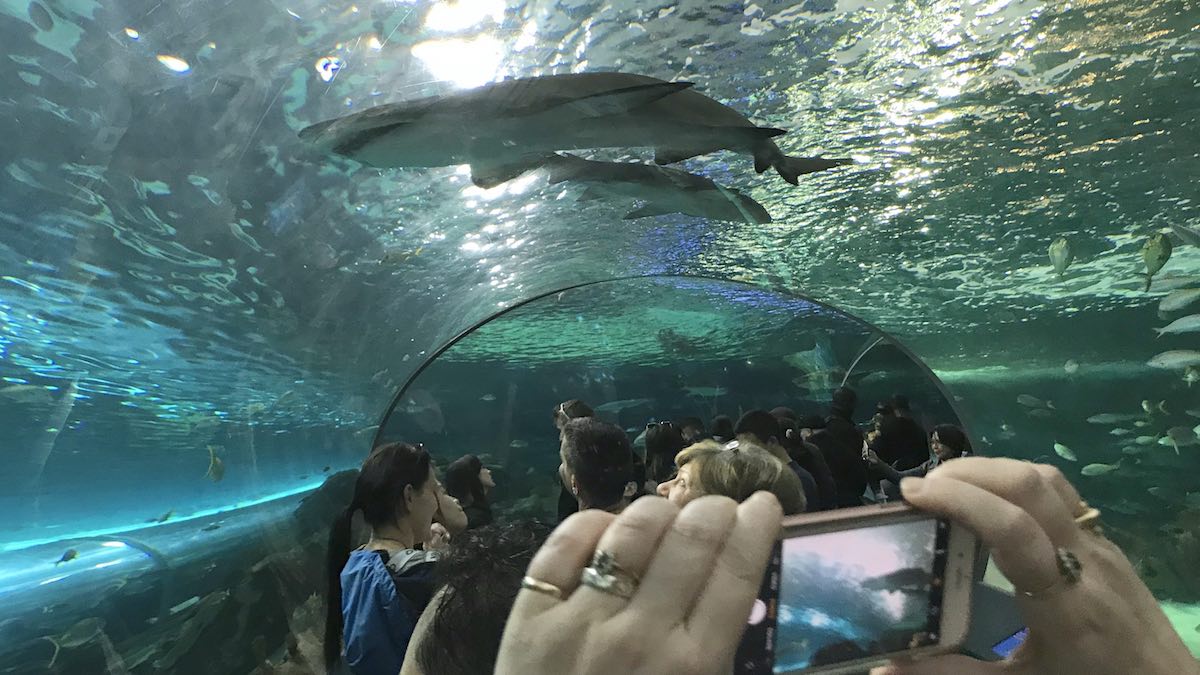 A few years back, I was in Toronto for a Google event and took a few of my kids along for the ride. We took advantage of being in the city to visit the newly opened Ripley’s Aquarium of Canada.

You can read my impressions from 2014 here, but one key takeaway was that everyone loved it.

So a few weeks back when the entire family was in Toronto while my daughter was shopping for a prom dress, we decided to go back — this time with everyone.

Ripley’s Aquarium of Canada is located near the base of the CN Tower in Toronto, and just across Bremner Boulevard from The Roundhouse where The Rec Room is located (that’s where the boys and I hung out for the morning, playing video games while the dress shopping was going down). It doesn’t look like an aquarium from the outside and it also doesn’t look particularly big, but appearances are definitely deceiving.

Inside, the aquarium encompasses 135,000 square feet of attractions, with 1.5 million gallons of water. Ripley’s suggests it takes two to two and a half hours on average to complete the tour.

To tell the truth, not much had changed from our 2014 visit. In fact, I couldn’t put my finger on anything that seemed different. But in this case, that’s a good thing because what they’ve created works very well as is.

There are a surprising number of exhibits, including local aquatic life. Bass may not be quite as exciting as a hammerhead shark, but the Great Lakes exhibits are still informative. And as you move through the facility, the creatures get more exotic, including an impressive room full of jellyfish.

And as I remembered from our initial visit, the highlight of the tour is the Dangerous Lagoon, which is a long (Ripley’s says football-field length) glass tunnel with a moving sidewalk. You slowly move through a tank filled with exotic sea life, including plenty of sharks. They swim past you, and above you as you inch forward. Because there’s no stopping for gawking, this ensures everyone gets a good view. There are plenty of photo opportunities and even the littlest kids get a good look, since the glass extends right to floor level.

Speaking of little kids, there are also glass crawl tunnels and bubbles extending into some of the tanks, a play area, a hands-on pool with rays and other creatures, and the inescapable gift shop at the exit.

We went on a Saturday afternoon, and it was waaaay busier than my weekday visit. The play area and hands-on exhibits were jam-packed, but the exhibits themselves weren’t too bad. A little patience was required to get a good view with some of the more popular ones, but not at the Dangerous Lagoon — thanks to that moving sidewalk setup.

Going back to changes, the one difference from 2014 is the ticket prices, which have gone up. Walk-up prices are $35 (Canadian) for an adult, $24.25 for youth and seniors, and $12 for a child. You can save a bit — and help to avoid the crowds during busy times — by purchasing a timed ticket online.

It’s not cheap, but I still think it’s worth it. My family had a great time. Ripley’s Aquarium of Canada is a great way to spend a few hours with your kids if you find yourselves in downtown Toronto.

Disclosure: Ripley’s Aquarium of Canada provided discounted media passes, but had no input into this post.

A GeekDad Goes to Nigeria