Ray: The final arc of Trinity begins, as James Robinson closes out the run with a story in Trinity #20 that picks up on elements of the previous Skartaris arc, but without as many high fantasy elements and some random out-of-character moments for one of the major characters. The issue opens with the prologue showing how Steve Trevor was lured into a trap and captured by Deimos, allowing the villain to impersonate him in the last issue. As the issue picks up, the Trinity is on the trail of Steve, and they’ve split up to search for clues in three different locations – each with their own unique threat. Superman is in space, investigating a mysterious satellite – that spits out Kryptonite-powered robot wasps. Wonder Woman is investigating ancient ruins and accidentally wakes up a giant cyborg Anubis. Batman is in the city and winds up under attack by an army of robot gorillas. These segments look great, but they feel sort of random.

The bigger issue is Superman. Superman, in almost all versions of the character, is a very gentle guy. He’s uncomfortable with using his powers and hates violence. Here, though, he’s almost spoiling for a fight to the point of boasting that he’s going to tear apart his enemies. They’re robots, so it’s not that bad, but later in the issue, he casually mentions over a pile of unconscious henchmen that he had to hurt a lot of people to get the information he needed. This really isn’t Superman in any meaningful. way. Batman is fine, and Wonder Woman is okay, although her characterization doesn’t go any deeper than “Tough Warrior Lady”. By the end of the issue, they’re heading to the big showdown against an army of Ogres – one of whom seems to be a transformed Steve Trevor. It’s a fast read with some exciting battles against monsters, but unlike the previous arc, there’s very little substance here and it loses most of the Skartaris mythology that was set up previously.

Corrina: Robinson’s work on Trinity is superior to his work on the current Wonder Woman comic but that’s a very low bar to pass. What I did like this issue was the teamwork between the trio, especially the three-way communication as they each faced obstacles at the different locations.

Superman seemed okay, if not great, and, yes, there’s little to Wonder Woman in this series besides tough warrior lady. Meanwhile, Steve Trevor gets stuck with the “brainwashed and made monstrous” role (as was easily predictable) though I’m sure he’ll be cured at the end.

The art is terrific and Herbert and Kirkham have a wonderful splash page in which Wonder Woman takes down her giant opponent. The pair handles the spectacular with the sequence in space, as Superman faces a satellite clearly many times his size.

Is this great? No. It’s readable, however, which is more than I can say for Wonder Woman. 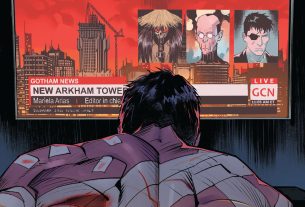