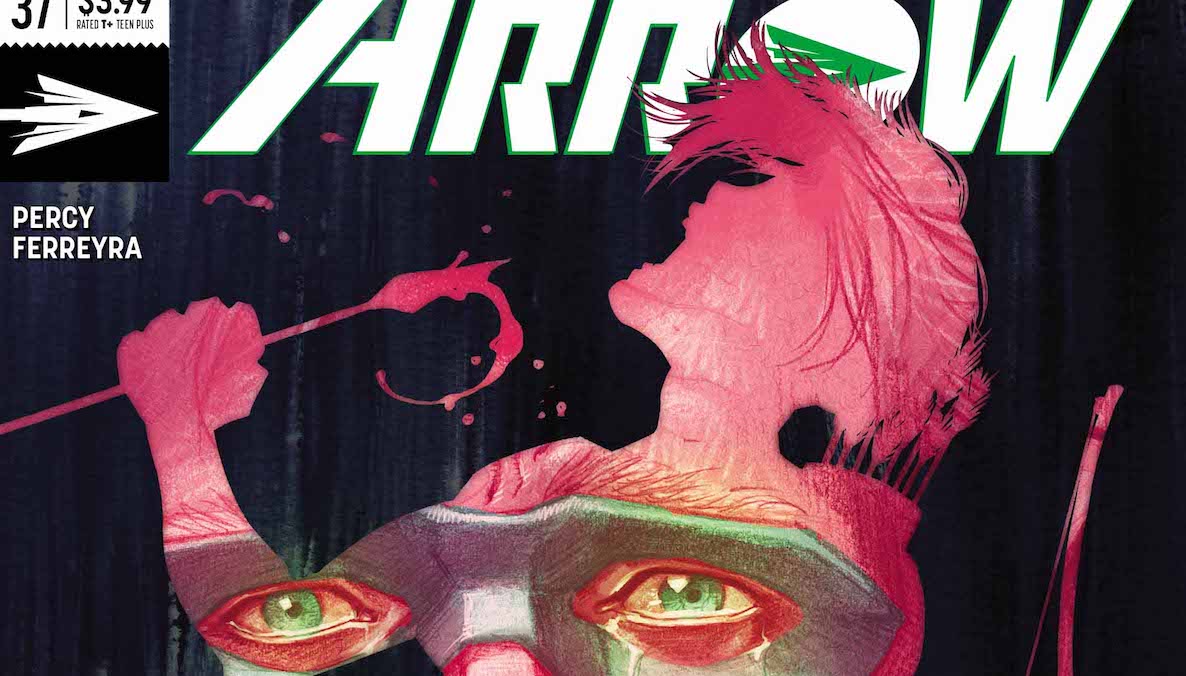 Ray: First up, let’s get the main thing out of the way – my enjoyment of Green Arrow #37 and of Percy’s run as a whole was going to be heavily dependent on whether Emiko survived that shot to the chest the last issue. And thankfully, she does! If anything, it’s a little bit casual. It really looks like a killshot, but then Dinah points out that she’s still hanging on, and the next time we see her she’s awake and cracking jokes in a hospital, barely worse for the wear. Makes the cliffhanger feel a bit cheap, but I’ll take it! Beyond that, this final chapter of the battle against the Ninth Circle is suitably epic, with Juan Ferreyra delivering genuinely spectacular visuals. Dante – who we still know very little about – turns the vault into a massive, moving deathtrap where the heroes and the villains have their final battle. Diggle switching sides again was welcome, and it was great to see Dinah take the lead while Ollie rushes Emiko to safety.

There’s a lot going on in this issue, and some of the things going on outside the main battle were more interesting. For instance, I thought the showdown between Shado and Moira was probably the weakest part of the issue. Moira is so overtly despicable that it’s removed any nuance from the character, and while Shado is an interesting character, here she comes off as rather one-note and her sacrifice sort of comes out of nowhere.

On the other hand, Kate Spencer steals the show, as she brutally deals with the home invader trying to kill Wendy and holding her son Ramsey hostage. Although I wonder if Percy remembered that Ramsey actually wouldn’t have much to fear from a knife – continuity deep cuts! Seems like there’s a lot of Manhunter still left in Kate. What makes this issue work, though, is the smaller moments. Ollie’s inner monologue, his interactions with Emiko and Diggle, and his final statements before heading into his trial. This run has its ups and downs, but as it enters its final act, it’s heading there on a high.

Corrina: As with most of Percy’s run, my reaction to this is mixed. On the good side, there is Kate’s takedown of the home invader who wants to kill Wendy and Ramsey. It’s a terrific moment for Manhunter, a character that has been horribly underused for years now. (I did like her as the DA in Gotham but that role vanished quickly.)

But Kate’s starring role, like the fight between Moira and Shado, also suffers from not enough setup. I’ve said before that Percy seems to simply drop in plot points rather than developing them, so therefore Kate is introduced as a lawyer with no hint of her ever having been a superhero or her background. Similarly, Moira’s characterization seems to rely more on the reader’s familiarity with the Arrow television show than anything I’ve seen in the book. She returns, contacts Ollie, instantly betrays him, and now she’s gone. Without the build-up, it’s anti-climactic. However, we have seen enough of Shado’s complicated relationship with Emiko to buy her sacrifice, so that worked well.

As for Ollie himself, he remains an enigma to me. He ran off to take down his enemies instead of standing trial and then says he’s learned something but I never quite see what he’s learned. Perhaps it’s that the Ninth Circle never became the complicated and complex enemy this run demanded for it to work. They’ve remained one-note villains all the while.