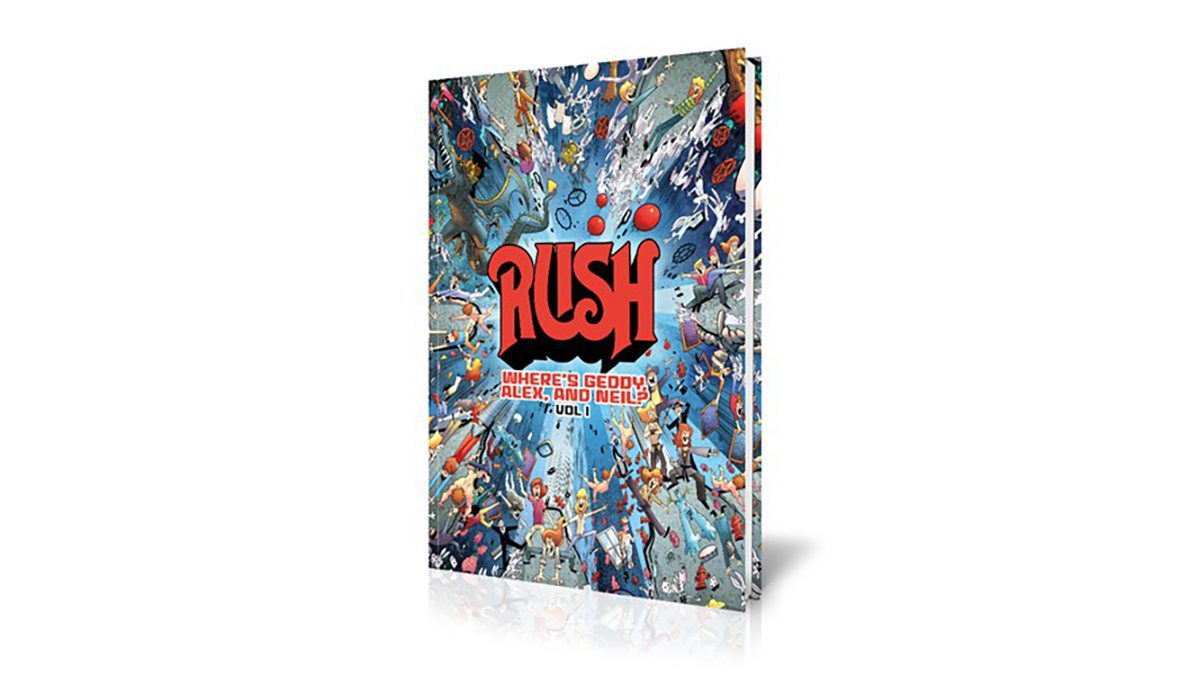 There was a sad day a couple of weeks ago following an Alex Lifeson interview where he affirmed that the band wasn’t doing anything, nor had any plans. If you’ve been following Rush news, it wasn’t really new though, unfortunately. But it was more definitive.

What made it sad was that someone edited the Rush page on Wikipedia to refer to the band in the past tense. It was another step toward finality. About Rush’s future, I choose to remain eternally optimistic, probably blindly, but that’s OK. There’s no harm in thinking positively.

In the meantime, I’ll keep listening to their back catalog, as I have for decades. And I’ll get my fix in other ways. One of those ways is celebrating being a Rush fan with some pretty awesome books, art, and merch from Fantoons. I love the Fantoons stuff because it perfectly captures the sense of humor the guys in Rush have — funny but still intelligent.

Since we last checked in, the Fantoons Etsy store has rotated its merchandise — one of the reasons it’s smart to bookmark the shop is that you don’t miss out on anything. Like I missed out on the Geddy Leesa print. Still angry at myself for that. I think part of the reason that we get to see more and varied Rush items is that Fantoons is an official licensee for Rush now.

There are some new limited edition art prints, which are super high quality and printed on what seems to be heavy, archival paper — perfect for framing. Among the new prints are a couple items in very limited quantities. There’s an angular interpretation of the Hemispheres cover (the next album to get a 40th birthday) and there were only 100 of them printed last spring. Surely that supply will run out soon and when they are gone, they are gone forever.

Even more rare than the Hemispheres print is a Signals print that gets the same treatment. Just 50 of these were printed and it is fantastic. What I like about both of these prints is that they are 12” x 12”, just a bit smaller than an LP cover, but when you see them from across the room, they are immediately identifiable as being the album cover. It’s only when you get closer do you realize that you’re looking at a piece of art that even Hugh Syme would appreciate.

So those two prints are rare, but this next one is really in short supply. This geometric portrait of Geddy, Alex, and Neil is limited to just thirty copies. It’s a bit larger, at 16” x 12”, and it’s a beautiful and unique way to let visitors to your home know exactly who the greatest band in the world is as soon as they walk through your front door.

If you live in a tiny house or simply don’t have the space for the prints, I’ll make a suggestion: check out the official fine art postcards. These have 8 different designs (including Fly by Starry Night and Canadian Gothic) and, at 5″ x 7″ are a great size for popping in a frame and hanging on a wall or displaying on a table. Plus, there are two copies of each so you can share them with a friend or send them away in the mail — they are legitimate postcards!

The t-shirt line has expanded too, with old designs rolling off and new coming in. Before I talk about the designs, I have to mention that these are good quality shirts. They aren’t going to fit in a never-flattering skin-tight way that just doesn’t work very well for older Rush fans, nor do you have to order 2 sizes larger just to get one that actually fits. They are soft and comfortable as a favorite shirt should be and sized like you would expect from a t-shirt. And they still wear well after a bunch of washings.

My favorites of the new designs on these official Rush shirts are what they are calling the 2112 Video Game style and the Fly by Night Hero. The 2112 shirt presents the band as you might see in an infographic about kimonos. It’s playful and gives a modern feel to an old album. On the other, the Fly by Night cover has been transformed into a crest that you might expect to see on a superhero. However, unlike the guy fighting Spider-Man, this owl just rocks and rolls (and maybe scares off By-Tor). It’s an absolutely beautiful t-shirt.

There are just a couple more items to mention this time around, but certainly not all the shop has to offer. One is a 2112 flip book. (When was the last time you saw a flip book?) The book tells a short story and features all of the members of the band. The story is told in two parts — flip through side 1 before turning the book over to see how the scene ends in part two. I should point out the price for this flip book is $12.21 — better than if it were flipped!

Finally, perhaps saving the best for last, is a book, Where’s Geddy, Alex, and Neil? Volume One. It’s a collection of images with many other people and other things in the image and it’s your job to find the trio among the crowd. Some are easier and some are tougher, but it’s all fun. Now, here’s the kicker — each spread has been crafted around an album. For example, the spread for Hemispheres has the parts of La Villa Strangiato spread out across a series of shops. On top of that, the images of Geddy, Alex, and Neil that are used change for each album’s spread and their likenesses correspond to their hair and dress at the time of that album. Volume One covers all of the albums through Hold Your Fire, even the two live ones. There are so many little jokes and trivial things hidden in the pictures that only true Rush fans will get.

Get yourself over to the Fantoons store and take a look. To paraphrase a lyric from Dreamline, some of the merch is “only available, for a limited time.” If you see something you like, grab it quick, before it disappears forever.

Disclosure: GeekDad was sent some samples of these items for review purposes.