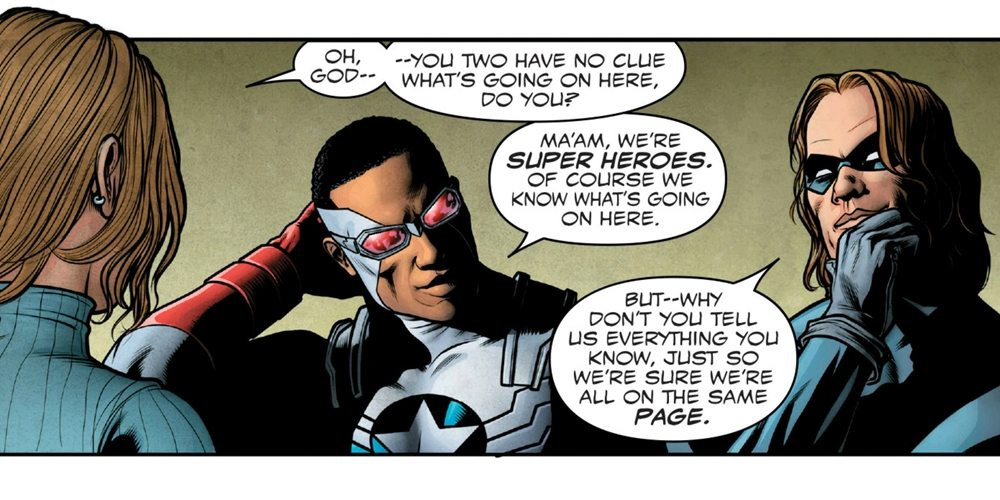 (Fair warning: some of the panels in Thunderbolts contain graphic violence. I have used some of them herein for demonstrative purposes. If you find blood disturbing and would still like to read the article, contact me via Twitter @SWSondheimer and I’ll send you a text only version.)

When we left our intrepid… heroes, I guess… Kobik had just torn Moontsone’s… well, moonstone out through her chest wall. In fairness, Karla was sort of asking for it when she yelled, in front of an all-powerful, cosmic cube child, something to the effect of, “Whoever has the moonstone gets to lead the team,” but regardless, the rest of the Thunderbolts are rightfully freaked. Including Bucky, who, we agreed when last we spoke of him, is relatively difficult to shock and appall.

How does the Winter Soldier respond?

He tells Kobik to put the moonstone back. Kobik argues she won the game and has a right to the prize. Bucky raises his voice to get her attention. Kobik starts to cry.

Bucky responds not with the guns he is wont to fall back on, nor with the strength of his bionic arm.

He takes her shoulders gently and he says:

Here’s the thing: whether you’re Bucky Barnes or Shiri Sondheimer, saying no to your kids sucks. The degree of suckitude varies with maturity level (parent’s and child’s) and the perceived emotional import of the thing being denied, but it always sucks. I, for example, explained very clearly to my children this past evening that they would not be watching their usual PBS video pre-bed if they continued to fight at high volume over hubs reading their bedtime story. They continued to fight. I denied them their video.

And lo, the floodgates did open and despite portentous warnings and enumeration of consequences, there was hysteria!

I hate putting my kids to bed upset. It breaks my heart every damn time.

If I hadn’t done it, though, I wouldn’t have been fulfilling my responsibility as their mom. They would learn nothing and we’d end up back in the same place every night, my frustration mounting and their entitlement growing.

Bucky tells Kobik she can return Karla’s moonstone or be booted from the team; the choice is hers, and in neither case does she get to remain the leader. She chooses to return the moonstone. I told Stinky One and Stinky Two they could stop fighting or miss out on video; they made an unfortunately choice, at least from their perspective. I maintained the boundary I had laid out despite an outcome that was less than pleasant for all of us.

You will think you can’t possibly take anymore.

And then, you’ll say no again.

If you don’t do your job, maybe your kids turn out okay anyway. Maybe they’re inherently good. Maybe you do the best you can and they still can’t make the connection between action and consequence. The majority, however, are going to be influenced by how steady you are. How much you care about other people. The extent to which you establish, maintain, and respect boundaries.

Does saying “no” suck? Yes. Do the tears hurt you more than they hurt the kids? Probably. But consider this scenario: fifteen years from now, your son is sharing an intimate moment with a partner; something shifts, the partner changes her/his mind and says, “no.” You son is upset, maybe hurt, but he remembers all of the times you said “no,” and the way you established, maintained, and respected boundaries. He respects his partner’s wishes. And you’ve spared another kid the trauma Brock Turner’s victim will carry the rest of her life.

I think it’s worth a few tears to create that possibility, don’t you?

Bucky Barnes is a killer. He is an assassin. He has been vicious, he has been cruel. He’s on the side of the light again now, but he’s still a killer, if only when he has to be. He’s still a non-conformist. Still a rebel. He puts the “anti” in “anti-hero.”

But even Bucky Barnes knows when to say “no” to his kid. He has a soft spot a mile wide for this innocent, and she is innocent in all the ways that matter, so he’ll take the hit of her upset and tears if it means sparing her the torment with which he’s lived, the struggles he’s faced to be human again.

If Bucky Barnes can do it, so can you. 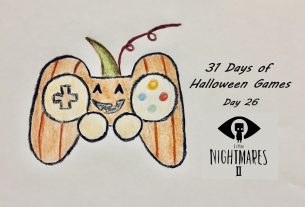