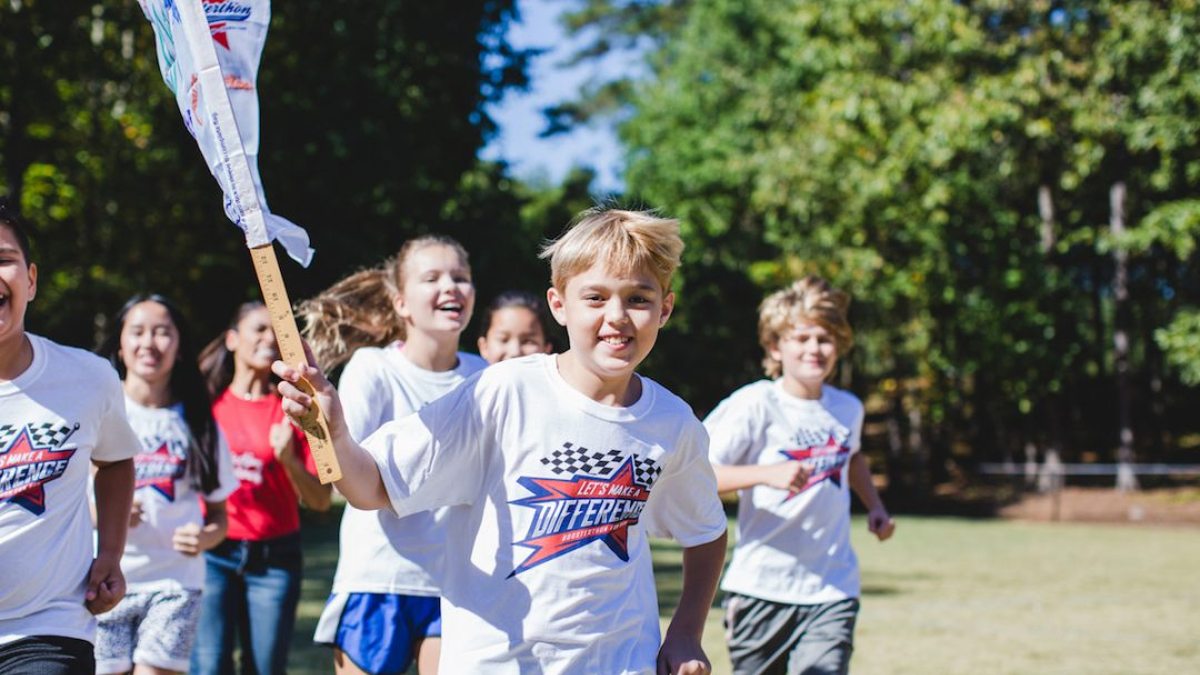 I hate school fundraisers with a passion. You see, I have three kids in school, from seventh grade all the way down to third grade. We’ve reluctantly participated in our share of school fundraisers over the years, and will likely face many more in the next decade or so to come. Each time we’ve done so, I’ve cringed. While I understand that fundraisers are a necessary evil for many public schools, I’d much rather cut a check at the beginning of the school year and never have someone tell my kids that if they’ll only sell X amount of stuff that no one wants, then they can have this cheap trinket and the school will make a percentage of those sales dollars… much less have to try to sell 3X as a family so each kid can have a cheap trinket that will get lost, broken, or trashed before the week is out.

This is coming from a guy who serves in key positions with a number of local fundraising organizations. Included in that mix is my role on my youngest daughter’s elementary school PTA board as the school Watch D.O.G.S. chairman. It has been my experience that I am not alone in my disdain for student fundraising, as reflected last fall when it came time to talk about fundraising options for the current school year. Oh, joy! Do we decide to sell this or to sell that?

This school year, a newer member of the PTA board suggested taking a different approach. Prior to moving to the district, her children had participated in a Boosterthon fun run at their previous school district. She mentioned that it had both gone over really well with everyone involved–students, families, and school staff–and saw better participation and results than a lot of more traditional (read: “sales”) fundraisers they had done in the past.

I was skeptical. “They do all the work and we get paid” has never played out that way for me in my fundraising experience. But, I kept my mouth shut. Anything that didn’t involve asking grandparents, neighbors, and co-workers to buy something (especially with Girl Scout cookie sales going on at that same time of year) was the lesser evil, in my opinion. Additionally, I wasn’t confident that the school’s administration and teachers would be cool with someone not connected to the school district coming in and telling them how this fundraisers was going to go and taking a portion of their instructional time. Principals and teachers tend to be Type-A personalities. Even if we moved forward as a PTA board, there was still a chance this would be murdered somewhere down the line.

In the end, I was pleasantly surprised with how well our first Boosterthon fun run went.

Our PTA board leaders and building principal sat down with a Boosterthon representative and selected a date for the fun run, which in our case was Thursday, January 18, 2018. A pair of Boosterthon employees arrived on Monday, January 8 to begin setup. Over the next eight school days (which was interrupted by a holiday and multiple-day school closing due to winter weather), the pair got students pumped up for the run by sharing Boosterthon’s “Castle Quest” character-focused curriculum. Their presentations were high-energy (as a parent of a child with sensory processing issues, I was, yes, skeptical of the approach) and effective. From day one of the lead up to the fun run, my daughter was excited.

Just as importantly–if not more important–the teachers were excited as well. 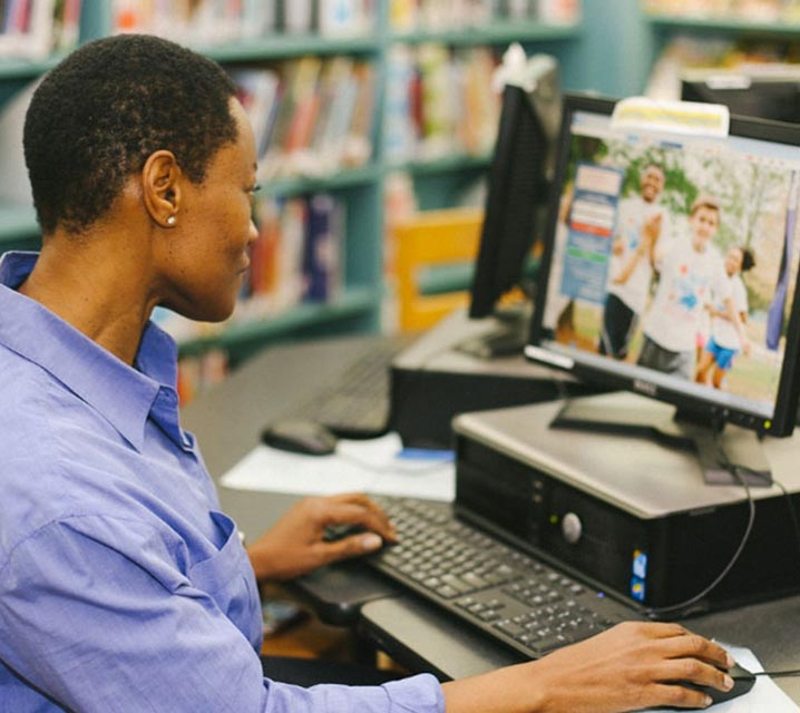 Instructions were sent home that walked parents through using Boosterthon’s online tools to create a donation page for each child and share instantly on a number of major social media networks. Donors could choose to make a flat donation or a per-lap donation. Boosterthon caps the number of laps a child can receive credit for at 35, so per-lap donors can do a little math and keep their donation within their budget.

One of the great things about the Boosterthon fun run is that every student gets to run, regardless of donations received. With other fundraisers, students who don’t sell whatever have to watch while much coveted trash and trinkets are distributed to the top sellers among their classmates. Nothing like drilling the ol’, “Put that half-pint of milk down. Milk’s for closers.” mentality into them while they’re young, right? Everyone runs during the Boosterthon fun run, and all the laps are counted, even if they’re run for free.

On the day of the event, additional Boosterthon staff arrived and transformed our school gym into a track/rave/party room. String lights marked the inside and outside lanes of the track. Tents were erected and audio equipment set up in the infield. Parents were invited to come and cheer on their students, who arrived at the gym bearing their class-designed flag and entered through an inflatable tunnel. Once the rules were laid out, the students walked a half of a lap to get warmed up, the gym lights were turned off, and the kids were turned loose. 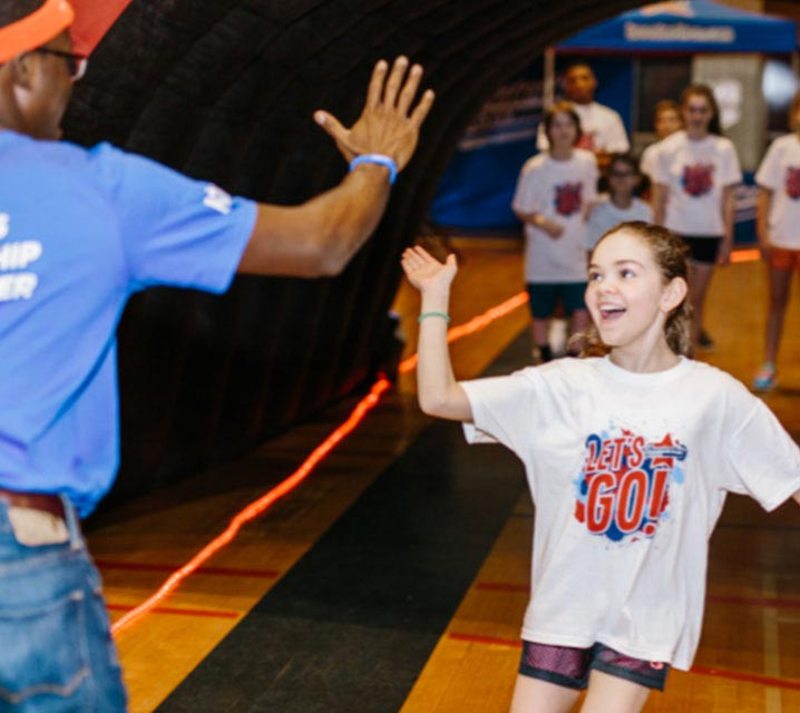 As volunteers, this is the only part in the process where we had to do any real work. Adult volunteers were lined up at the lap marker with Sharpies. Each runner had a sticker on his or her back, and as they completed a lap, they slowed down and their stickers were marked for the corresponding lap number. With so many kids running and with the number of volunteers we had, that meant that the runners got a chance to catch their collective breaths for a few seconds as they worked their way through the line. Periodically during the run, the Boosterthon DJ would slow it down and have the kids walk a couple of laps, which still counted toward their goal of 35 laps, in order to keep anyone from going all out and getting overheated.

Our school choose to have students run during their related arts hours, to minimize the impact on classroom instruction. Even with a two hour late start on the day of the event (remember that winter weather I told you about?), all students who were present were able to participate over the course of that single-day event.

What Were the Results?

That’s all great, you say. The PTA and volunteers didn’t have to do too much. You didn’t have to go out and sell a bunch of stuff that nobody wants or needs. Everyone got to participate and no one brought home a cheap squeeze toy or one of those sticky things you throw at the wall that “walks” down and ends up covered in pet hair. Good for you. How much money did the fun run raise for your school?

The goal for our school was to raise enough money to cover Boosterthon’s take (around $2,000 or so, for setting up, promoting, handling the donations, and hosting the event… your school’s cost may differ) and net the school $10,000 to cover the final costs for the greenhouse project. Was that a realistic goal? We didn’t know, but the Boosterthon folks suggested that for a school with our enrollment numbers, it wasn’t unrealistic. It all came down to donor participation. 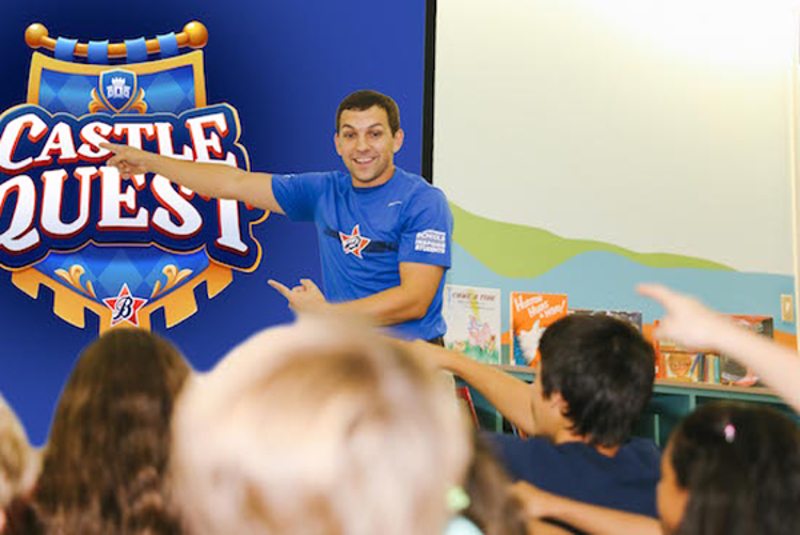 Because we had a holiday and two days of school closing due to weather, Boosterthon extended our donation deadline by a few additional days. As I type this article, we have raised nearly $15,000 from the event, exceeding our goal by around 30%. With enrollment around 640 students, that’s a per-student average between $20 and $25 (which doesn’t tell the whole story, when about 40% of the student population qualifies for free or reduced lunches). To say that this event was successful beyond anything even the least skeptical among us could have hoped for is an understatement.

That evening, our PTA held our annual Winterfest, which was scheduled to serve as a wrap up for the fun run activities. Parents shared with me and others that they were thrilled with this fundraiser, even without knowing the final numbers. The overwhelming sentiment was that parents and students very much enjoyed the idea of the kids getting character instruction and running laps during the school day over the thought of having to sell a whole lot of something in order to reach some unattainable goal to get an upgraded piece-of-junk prize, then being upset when they didn’t sell that crazy amount in order to get what cost pennies if ordered in bulk from Oriental Trading or some such source.

Barring some unforeseen change, we expect to bring Boosterthon back again next school year.

If you are tired of your child being used to move product for a company not connected with your school or community in order for your school to get a relatively small piece of the pie, you might consider attending a PTA meeting–or, gasp!, joining the PTA and volunteering–and suggesting that your child’s school take a look at Boosterthon.

Disclaimer: This article is based on my experience with Boosterthon. Boosterthon in no way asked for nor advocated for this review. 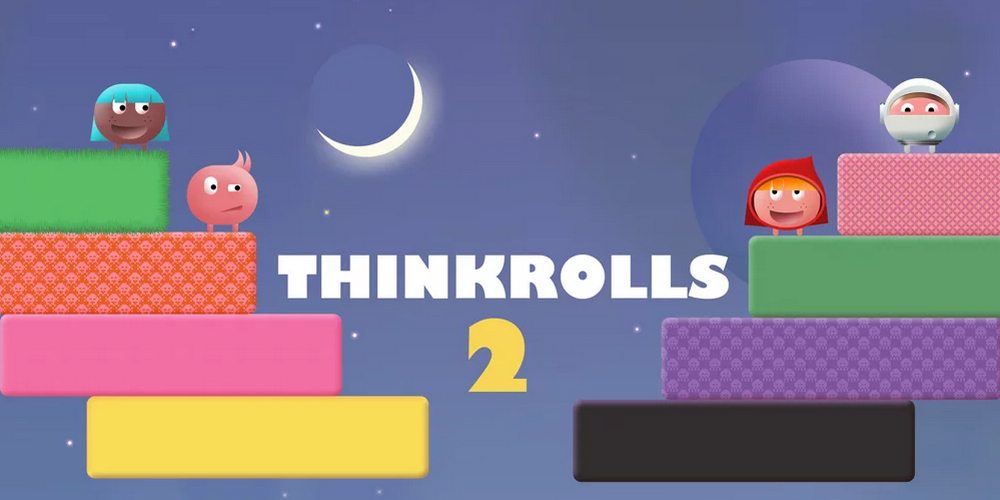 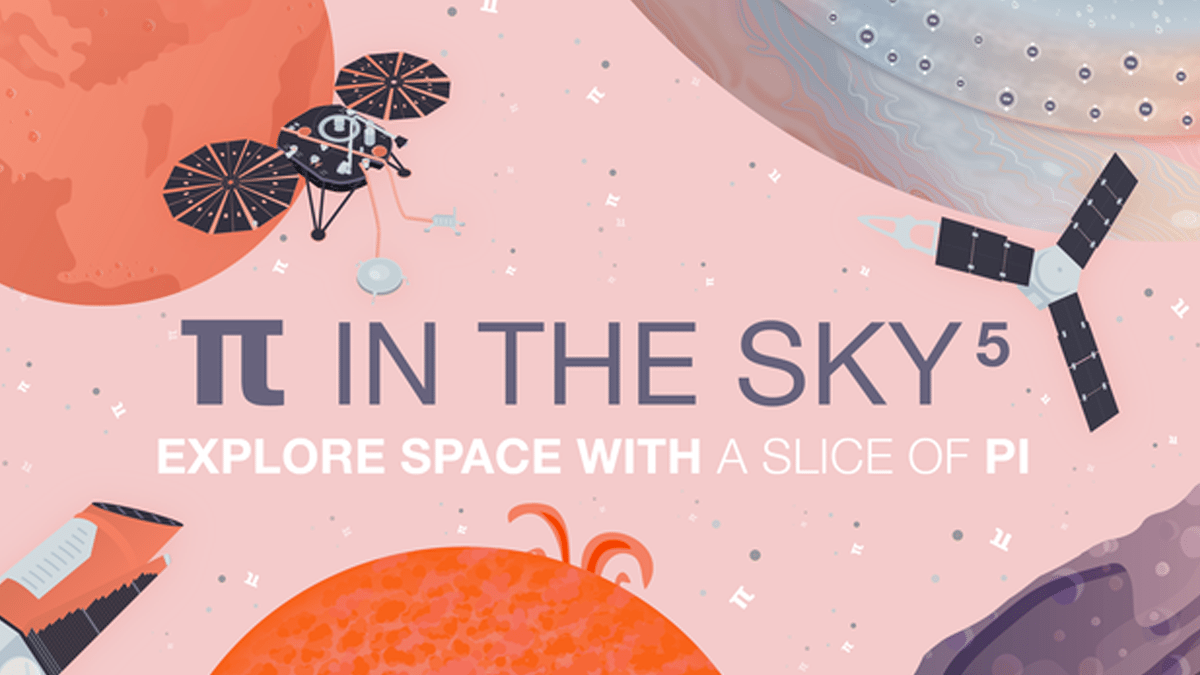 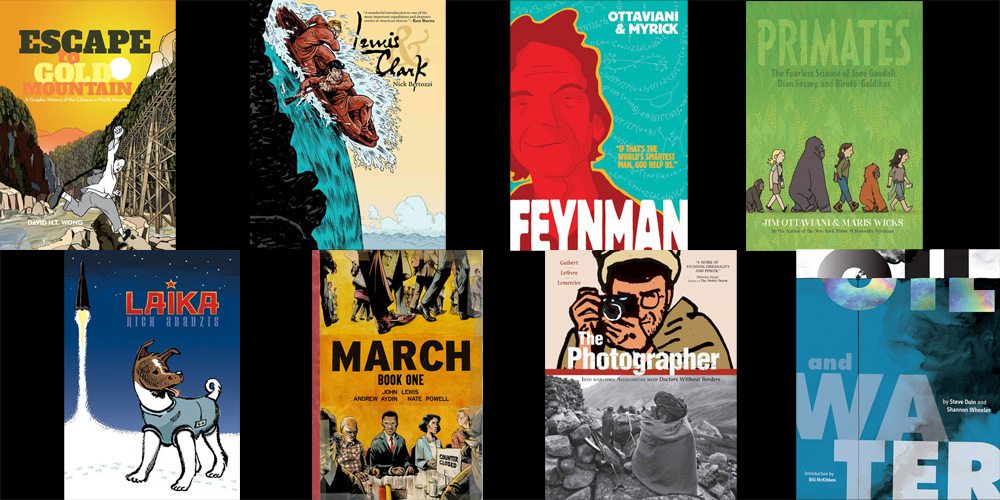 21 thoughts on “Boosterthon Puts the “Fun” in Fundraising”