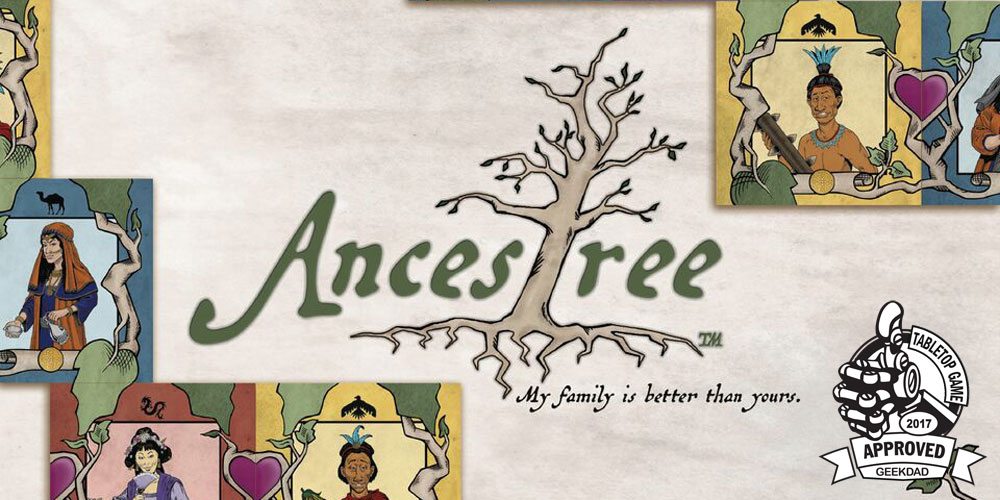 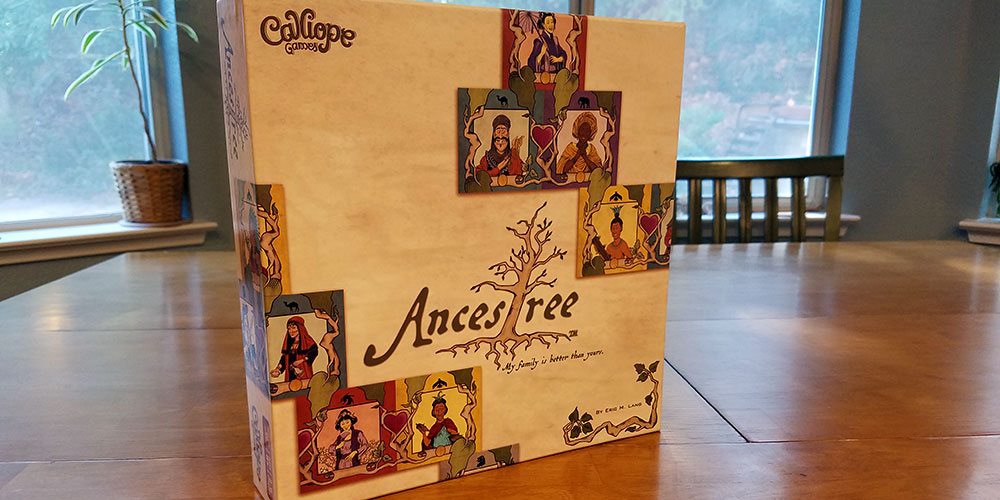 Everyone knows that they have the very best family, right? Well, now you can prove that your family is indeed the best in the somewhat silly but surprisingly deep and immensely fun Ancestree by Calliope Games.

Ancestress is a tile-laying drafting game for 2-6 players. Over the course of three rounds, players place tiles in front of them to build out their family tree.

Tiles can be placed below others, connecting leaves to create parent-child relationships, and next to one another, joining hearts to create marriages. Along the way, everyone is also trying to create the largest generational chains within the five dynasties in the game, as well as trying to get the richest relatives.

To make things even more interesting, the game utilizes a drafting mechanic. Each round, players start with six tiles. They select one to play, and then pass the remainder to the player on their left (in rounds 1 and 3) or right (in round 2). This way, you not only have to consider what tile best fits your tree, but also, which one might be most helpful to the next player, adding an extra layer of strategy.

After each round, players score points by comparing their family tree to the players to their left and right. You get a point for each dynasty that you have that is bigger than the same family next to you. You also get coins for each tile you played with a coin icon, and those coins count as points at the end of the game.

Ancestree is currently available for $34.25 from Amazon and other retailers. Games usually last around 15-20 minutes.

Note: I received a copy of the game for review purposes, but the opinions are mine.

The components are all made from nice thick cardboard. The artwork is somewhat whimsical, with lots of smiling ancestors.

Each dynasty is represented by a color, an icon, and the artwork itself. Each tile therefore has three distinct ways to identify it, which is particularly nice for players who may have troubles distinguishing them based on color alone. The colors and icons are also repeated on the scoreboard.

Each family has six distinct members, which doesn’t factor into game play. But each tile shows one of six possible combinations of leaves and hearts for connecting that member to the rest of the family, which is the important part of the game. There will be plenty of times when you really need someone who can marry someone on their left, but the tiles in your hand only have right-hand marriages.

How to Play Ancestree

Setting up the game is easy. Take all of the tiles and mix them and place them in a face-down pile on the board. Note that the trees you’ll create may get big, so you need a bit of table space. When we played, we put the tiles in the box lid to give us more space for our trees. Then, give each player a scoreboard, and put the dynasty tokens and the coins in piles on the table.

Each player starts by drawing six tiles. They select one to play and place it face down on the table, then pass the rest to the player on their left. Everyone simultaneously reveals their tile and plays it. Then, they pick up the stack from the other player, and repeat this process until all six tiles have been played. That triggers the first scoring round. After that, everyone draws another six tiles and repeats the steps above, this time passing to the right. A third and final round, with passing to the left, follows that.

Tile placement is the key element in the game. Obviously, the first tile is simply placed on the table. But every tile after that must be attached to every other tile either by a leaf or a heart.

The leaves are parent/child relationships. Each tile has either a light leaf or a dark one, and subsequent tiles have to match those. However, not every tile has leaves in all four possible corners. Some people don’t ever have kids, and so they don’t have any leaves on the bottom edge. And some don’t have top leaves. I mean, obviously these people had parents, but they don’t seem to matter to our family anymore. Probably because of that incident that one Thanksgiving.

The placement rules for the tiles are a bit different from other tile laying games, because every feature on the tile doesn’t have to match adjacent tiles. For instance, if a it’s legal for two tiles to be next to each other when only one has a heart, so long as the leaves do match the tile above (these would be siblings, who obviously shouldn’t be getting married.) And, by the same logic, a tile can be placed to match up the hearts, without worrying about the leaves, for basically the same reason.

Scoring is fairly straightforward. Each player compares their tree to the players to their immediate left and right. They get one Dynasty Token for each dynasty where they have a longer vertical chain than their opponent. So, for each family, it’s possible to get up to two tokens per round. In the case of a tie, neither player gets points.

The “I” tokens are awarded in the first round, the “II” in the second, and the “III” in the third. These represent the actual points to be earned, so longer dynasties are worth more late in the game.

The scoring round also awards coins, based on the coin icons on each tile. (In the image above showing legal tile placement, all three of the tiles on the right are showing coins.) Coins represent points at the end of the game, and are cumulative, so a tile placed in the first round will award coins in all three scoring phases.

At the end of the third round, after the dynasties and coins are scored, marriages are scored. The more marriages you have in your family, the more points you get, based on the chart at the bottom of the scoreboard.

Players add up the points gained from their dynasties, coins, and marriages, and the player with the most points wins. Ties are shared victories.

Why You Should Play Ancestree

I think all of us were a bit surprised by just how fun Ancestree was.

It was incredibly simple to both set up and explain, so we were able to get our first game going very quickly. (It possibly helps that we play drafting games fairly often. I could see that mechanic potentially being confusing to new players.)

The different tiles pose interesting challenges when playing. You need to be careful to not play tiles that will  make future connections difficult. For example, while there are equal numbers of tiles with hearts on the right and the left, you of course aren’t guaranteed to get the ones you need, but you may have to play a tile as a sibling instead of a spouse because you can’t get the correct heart. However, marriages are more valuable due to the end-game bonus. The tiles with no leaves on the bottom are particularly challenging to play.

But you also can’t only pay attention to your tree, since the big points in the game are from having bigger dynasties than your opponents. So you need to be looking at their trees and calculating how you can keep some of your dynasties bigger than theirs. And this is where the draft mechanic comes into play: do you play a tile that isn’t really ideal for you just to keep from passing it to an opponent, or do you help yourself instead?

The depth of strategy, combined with the ease and speed of play, ensures that Ancestree will make it to the table a lot in my house. 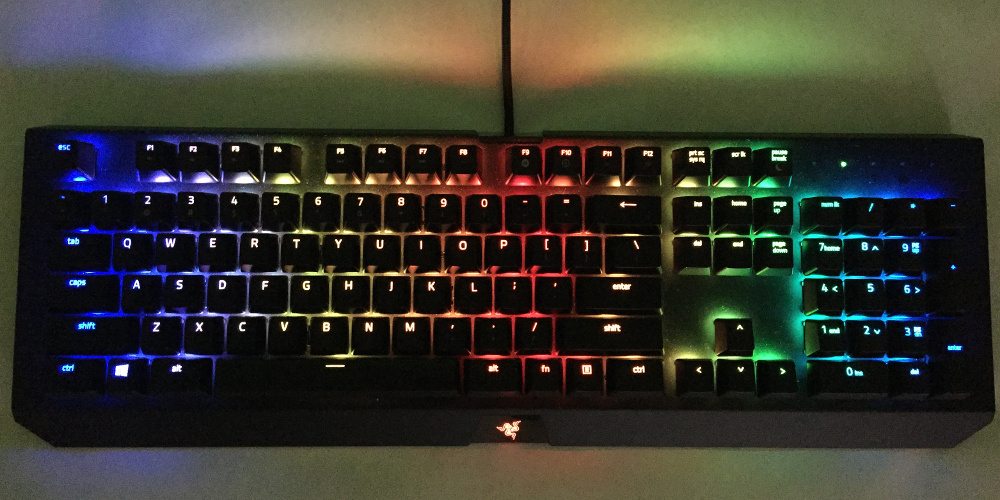