Ray: As “Fall of the Batmen” ramps up what looks like Detective‘s biggest arc yet, this issue delivers one brutal punch after each other as Batman heads into the belly of the beast. As the issue opens, a lone reporter is essentially forced into Arkham Asylum by her corrupt boss to interview the First Victim. The mysterious villain has taken over Arkham along with the rest of their Syndicate and guards loyal to them, while loyalists also sweep over Gotham in increasingly heated demonstrations denouncing Batman. They demand that Batman surrender to them to be unmasked, and the new Mayor of Gotham refuses to cooperate with Batman for any elaborate plans to take them down. We see some tension erupt within the Bat-family, as Steph’s dalliances with Anarky are revealed and Tim’s ambitious plan to call in the Colony is shut down by Batwoman and Batman.

With no other options, Batman decides to head into Arkham and take on anything inside. Clayface, meanwhile, has been captured by Mudface and is being brutally tortured. Mudface is a pretty fascinating character – a victim who’s become so corroded by her own pain and torment that she would rather see the guilty party suffer than be happy herself. She’s pitiful, yes, but she’s also terrifying.

If I have one quibble with this issue, it’s the portrayal of Anarky – no writer in twenty years seems to have been able to use him effectively as an anti-hero. Tynion’s take is a much more villainous Lonnie Machin, but at least he’s the original version and still a compelling adversary. And his stupid first costume is back in continuity! The end of the issue is a brutal showdown of Batman vs. hundreds of loyalists to the First Victim – and ultimately, against his own ally, twisted beyond belief. Solicits have made clear this arc will have a tragic ending, and Tynion’s done a great job of making us care about every player here.

Corrina: Damn, why does Batman get the blame for Arkham? He didn’t build and doesn’t run the thing! Yeesh.

Being serious now, brutal is definitely the word for this issue but not physically–it’s the emotional blows that hurt the most. It’s seeing Tim willing to work with the Colony, even after what they did to him, it’s the scenes between Mudface and Clayface where the trauma drips from both of them, it’s Clayface’s transformation at the end to the monster he tried so hard not to be. This comic is full of moments like that and they hurt because you care about these people. Poor Cassandra, who simply wants to help the best friend she’s ever had. Poor Stephanie who’s seeing her relationship with Tim erode, and even poor Kate, pulled back into conflict with the Colony, with no easy answers.

I have one other quibble different from Ray, and it’s wondering why Batman gets all the blame for Arkham. Seriously, this time. And I wish the new Mayor had more screen time, so he becomes more than simply an obstacle. But, overall, this is a riveting issue. 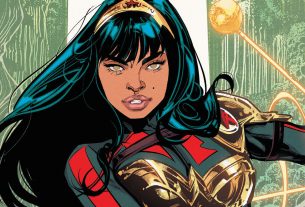 Review – Harleen #3: The Fall of Quinn