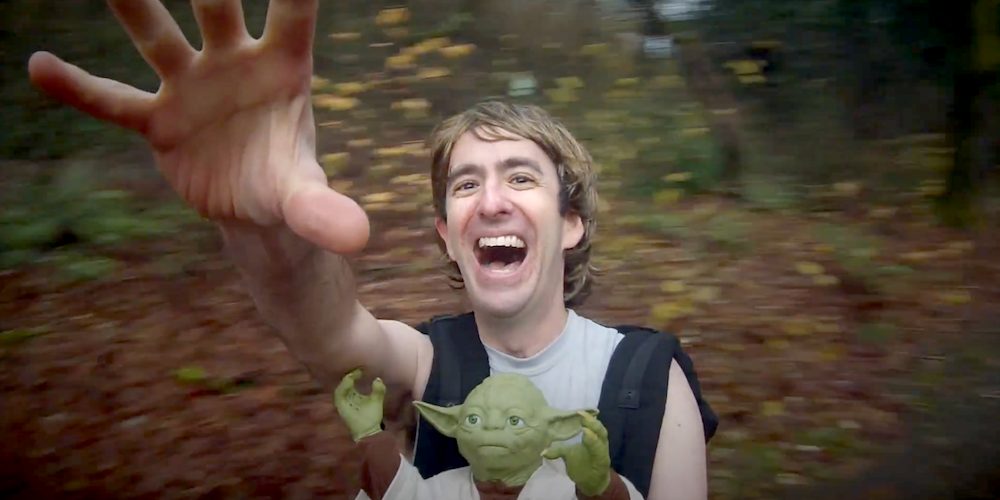 Fans of “kindie” music, especially in the Seattle area, have been happily listening to Recess Monkey for years. This fall, Jack Forman of the rock trio and host of Kids Place Live on Sirius XM released his first solo album for families. Filled with the same enthusiasm and joy that fans are familiar with, Jack’s Songs From the Monkey House easily gets toes tapping and puts smiles on the faces of listeners—of any age.

Geek moms and dads will find lots to love on this solo debut, but it’s “Yodeling Yoda” that will endear this album to your heart. Take a look at this hilarious, brand new video from Jack Forman, and just try not to smile.

“That I’m a fan of Star Wars is probably the understatement of the galaxy! (This one, or another far, far away!)” Jack tells GeekMom. “I was a big time Star Wars fan growing up, and the kids I talk to on Kids Place Live are as gaga for the movies as I was (and am).”

Jack not only loves to hear about Star Wars from his SiriusXM listeners, but is overjoyed that it’s becoming a part of his own family’s time together. “The Star Wars movies have captured my kids’ imagination just like they caught mine — and I just love that we can all connect with them together,” he says. “I think that kid-adult connection is one of the biggest reasons that I started making music for families to begin with, so I guess it’s only natural that the movies entered my field of view.”

“Yodeling Yoda” isn’t the first time Jack has put his favorite Star Wars moments to a catchy tune. “Oh Lando,” featured on Recess Monkey’s Hot Air album, was told from Han Solo’s point of view. “The fun thing about ‘Yodeling Yoda’ song is that it happens simultaneously as ‘Oh Lando,'” says Jack. “Han, Chewie, Leia, and 3-PO head to Cloud City while Luke and R2 meet Yoda on Dagobah. I imagined the songs as a tandem pair, and now they’re both free!”

Lando is one of Jack’s favorite characters from the original trilogy, although it’s a close competition with Yoda. “Lando is, to me, the most complicated character from the original trilogy,” Jack says, “because you’re never quite sure what his motivations are until later on in Return of the Jedi. Yoda’s 900 years old and he has the voice of Miss Piggy. What’s not to love about that mash-up?”

Also dear to Jack’s heart is that fuzzball Chewbacca. “He’s a dedicated friend, a crack-shot with the crossbow, and you just KNOW the guy give out the best hugs in the galaxy,” he says.

And what would an ode to Chewbacca sound like? Jack has a few ideas, just off the top of his head. Literally. “I think any song about Chewbacca would have to relate to his haircare routine,” he says. “Each year as I get older, hair care becomes a lesser and lesser factor, if you catch my drift, but I think a lot of people would benefit from a point by point rundown of his morning routine. Does he condition? Is his hair naturally straight or wavy? Does he ever get rats and/or lice? I think this is all really useful, practical info.”

And the Winner of the Star Wars Tom Tom Giveaway Is…

Literary Empathy, or How Spider-Woman Made Me Okay With Men Who Write Women

NASA, Shuttles and Space for the Future