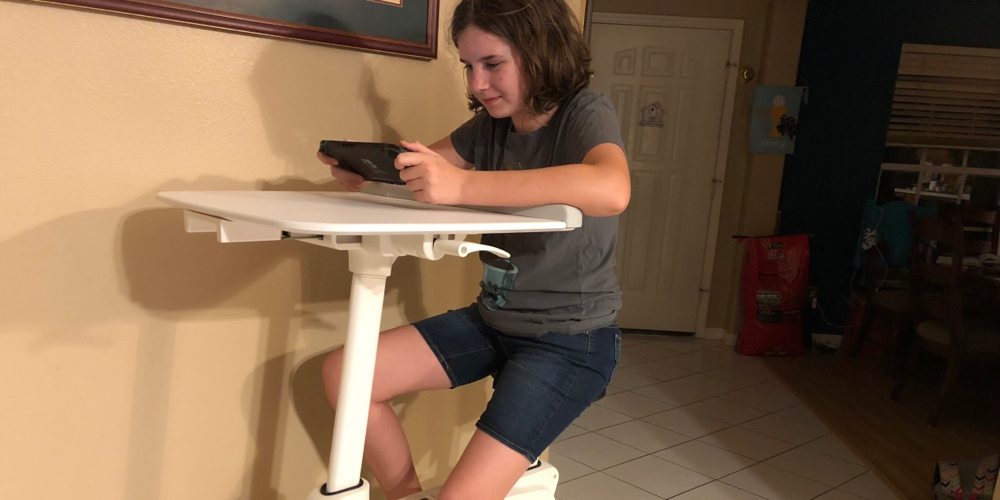 I’ve reviewed a couple of standing desks from FlexiSpot, the FlexiSpot M2-35″ standing desk and the FlexiSpot F3 standing desk. But this review is for a much different product. The Deskcise Pro™ is an exercise bike that has a height adjustable desk surface built-in allowing you to work and exercise at the same time. There is one more surprise built into the design of the Deskcise Pro™ and that is that the desk surface is adjustable enough in height and in the horizontal positioning such that you can stand to the rear of the cycling seat and use the Deskcise Pro™ as just a standing desk. Why would anyone want a desk attached to an exercise bike? It’s quite simple; if you struggle to find the time to exercise, the Deskcise Pro™ allows you to burn calories while working on a laptop, reading a book, playing on your Nintendo Switch, or even while watching TV. It allows you to combine exercise with things you already spend time doing every day.

The seat adjustment uses a hydraulic lift system that feels very similar to what FlexiSpot uses in their standing desks, which means moving the seat up and down is as easy as pulling up on a lever under the seat.

The desk also has a padded armrest built into it. I found the armrest handy when typing on a laptop or reading from my iPhone or even a physical book. But when I am using my iPad Pro and a connected keyboard, the keyboard is enough lower than a laptop that the armrest doesn’t work well. In that case I have found adjusting the desk surface back so that more of my arms rest on the flat desk surface and bypass the armrest solves that issue and gets my hands in a much better position with respect to the low iPad Pro keyboard. So the good news here is that if you don’t like the built-in armrest you can somewhat adjust the desk to take it mostly out of play. However, in most use cases I find the armrest quite comfortable. The cup holder is also a really handy addition and keeps you from spilling a drink all over your work surface and electronics, and the padded surface at the bottom of the cup holder helps keep the cup from tipping out if your leg brushes against the cup while cycling.

But Is It a Good Exercise Bike?

I’m going to get this out of the way right up front and say that I really don’t like the seat on this bike, at least from a comfort perspective. I’m a road cyclist, so I’m used to spending many hours at a time on a rock hard bike seat. This is not a rock hard bike seat. It can’t be. It is designed for people in normal street clothes to hop on the bike for maybe 30-minutes to an hour and lightly pedal. So the seat needs to have some padding. But even with padding the seat starts getting uncomfortable after about an hour. This is probably just the road cyclist in me, so don’t take this as too much of a negative. If you use the Deskcise Pro™ as it is intended, for short duration at light to moderate levels, the seat does its job. It allows for full leg motion and your butt doesn’t go to sleep. Just don’t plan on spending too much time on the seat.

The motion and resistance of the bike pedals is excellent. Most gym exercise bikes have a very unnatural resistance and that just isn’t the case with the Deskcise Pro™. The very simplistic click into place turn dial to adjust resistance seems a bit too simple and analog when you first use it, but then you realize that being able to hear that dial click while making tension adjustments is super-handy. The pedal rotations are silent. We currently have the Deskcise Pro™ setup just behind our couch so that anyone sitting on the couch has their head only a few feet away from the bike, but even that close you can’t hear the pedaling while you are watching TV.

How Does It Perform as Just a Standing Desk?

I use a standing desk at work, but I would also like to stand for short periods of time while doing things on the computer or iPad at home as well. The Deskcise Pro™ works great for when you just want to stand up for a bit from the couch while going through email or doing a bit of working from home. You just walk over to the Deskcise Pro™ and pull the table surface back all the way, adjust the height as needed, and you have a very comfortable little standing desk. The best part of all of this is that for the same small footprint that the Deskcise Pro™ takes up you get both an exercise bike and a standing desk. I was a little worried just from looking at the online photos that the bike seat or the rear wheeled feet would get in the way and make the Deskcise Pro awkward to use as a standing desk, but that turns out not to be an issue. The desk surface pulls back far enough to take all of those things out of play while using it in this mode.

My Thoughts and How I’ve Been Using It

Like I mentioned earlier, I’m a road cyclist and I also do quite a bit of weightlifting and running. It seems like I am always fighting a losing battle when it comes to staying in shape and keeping the pounds off. The Deskcise Pro™ is NOT something you should look at using to get a good cardio workout in, but it is an amazing way to “cheat” the system. What I mean by this is that you can exercise on the Deskcise Pro™ while doing other things and get a really good calorie burn. It feels a bit like cheating because you are occupied with something else (reading, typing, playing video games, or watching TV), so it doesn’t even feel like you are exercising.

I have been using the Deskcise Pro™ for about 2-hours every day since my review unit arrived a few weeks ago. I do about an hour of work from home every morning before driving into work, so I now do that work while on the Deskcise Pro™. I have also gotten in the habit of coming home from work and immediately climbing on the Deskcise Pro™ for another hour and either doing more teleworking or doing a bit of writing for GeekDad. Before having a Deskcise Pro™ around I would get home from work, grab a snack and sit down, and start reading emails and a bit of news. Before I knew it I had to start cooking dinner. I have a long enough commute that by the time I get home my energy levels are super-low. Now I am able to get my blood pumping a bit more, get some work done, and that gets me motivated to do a pre-dinner run or weightlifting session. These extra 2-hours of daily calorie burn have been amazing, both from a weight loss and productivity perspective. My wife and kids have started using the Deskcise Pro™ as well. I think they also recognize that it is kind of fun to get a bit of physical movement in while doing tasks that before were purely stationary.

So is the Deskcise Pro™ for you? Only you can answer that question, but I will say it is a very effective low impact workout that you can do while doing a large variety of other things. It is also something you can use to force yourself into exercising. For example, only allow yourself to check Facebook or Twitter or read your daily news if you are using the Deskcise Pro™. Before you know it you will be using the Deskcise Pro™ for even more things, and you just might get yourself into better shape while doing it. Head over to the FlexiSpot website to check one out.

Disclaimer: FlexiSpot sent me a Deskcise Pro review unit for the purpose of this review. 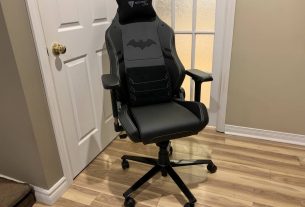 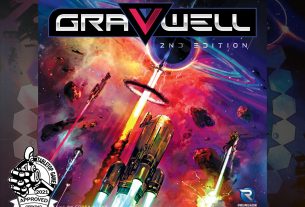