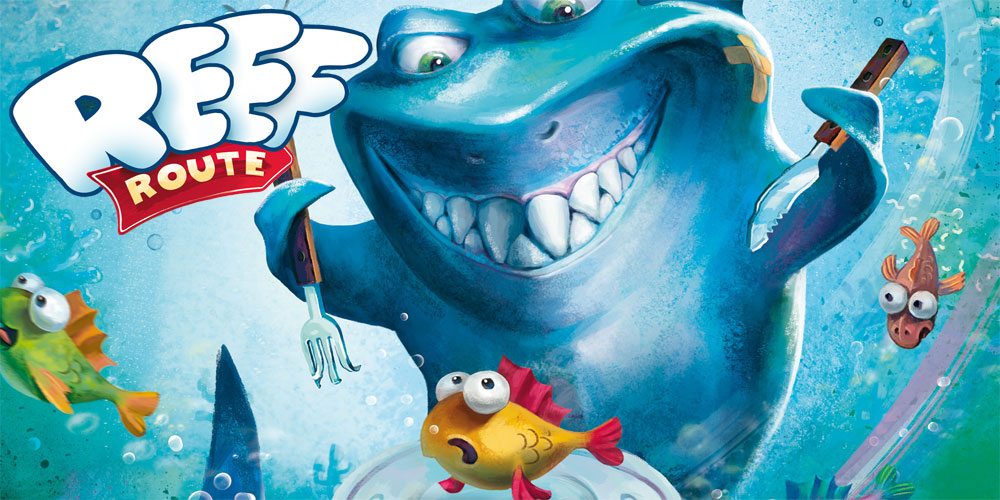 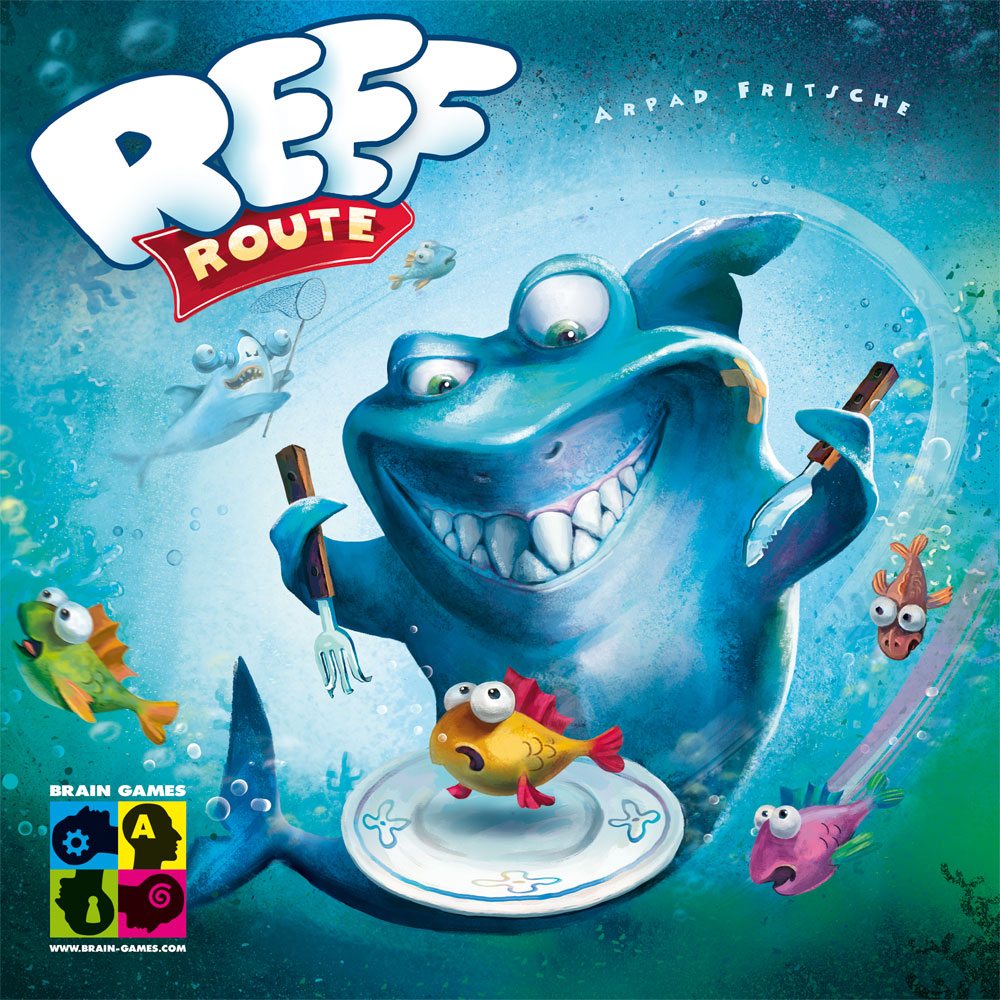 Your school of tropical fish just wants to get home… but between you and the safety of the reef, there are some nasty predators who are interested in a little snack. Can you find the best Reef Route?

What Is Reef Route?

Reef Route is for 2 to 4 players, ages 5 and up, and takes about 15 minutes to play. It was released at Gen Con this year by Brain Games and is currently available in stores and online. The game is kid-friendly, though you can play with adults and make it a bit more cutthroat if you like.

The board is a large rectangle divided up into grid lines, with a colorful reef illustration in the background. On the right side of the board there’s a chained mine that marks the predator starting line. My board had a little trouble laying flat–it peaked up a little in the center.

The fish and predator tokens are all wavy rectangles–I suppose the wavy edges are for a thematic watery look, which is cute but it does make it a little harder to slide fish around on the board when they’re really close to other fish. I like the predators–they’re more goofy than scary, which is appropriate for a kids’ game.

The large circular player tokens are just set in front of the players so that it’s easy to remember who’s who–important in a game in which you may end up moving another player’s fish. The player fish all look the same except for player color, which may be problematic for color blind players. The dice may also be difficult for color blind players–both could have used a little added iconography to make that easier.

The dice are wooden dice with rounded corners, screenprinted with the icons. Each die has two faces with predators, and the other four faces show fish in the four player colors.

How to Play Reef Route

The goal of the game is to be the first to get your fish across the board to the end or be the last player with fish remaining on the board.

To set up, give everyone the four fish tokens and player token of their color. Choose three of the predators and set them on the board on the right side, behind the chain, with at least one space between them. Players take turns placing their fish in the two columns on the left of the board, first placing at least one fish in the column closer to the predators. (For a shorter game, you can play with just 2 or 3 fish per player.) If you have fewer than 4 players, fill in the remaining spaces in the columns with other small fish.

If you can’t move either of the dice, then you may move any small fish forward one space.

If any small fish touches any part of a predator, it is eaten and removed from the game.

You win if you get any small fish successfully to the reef at the right end of the board, or if you are the only player with fish on the board.

Why You Should Play Reef Route

On the surface, Reef Route certainly appears to be a simple kids’ game—and it does work well for young kids—but there are some hidden depths to it, too.

First, here’s why it’s great for little kids: the rules are simple and the concept is easy to understand. Move other players toward the predators, move the predators away from you, move yourself to the reef. Got it. If you’ve got kids who are still learning basic gaming concepts like rolling dice, learning colors, and taking turns, Reef Route will work.

With older kids or adults, though, you can break out the bigger predators, and the game can get really cutthroat. Younger kids usually move the predators forward toward the school, but then it may be possible to sneak past, and have a wide-open path to the reef. Older players tend to use the predators more like a goalie, moving it up and down unless it can jump forward and eat an opponent’s fish.

When you roll another player’s fish, you don’t get to choose a direction because you must move them forward, but you do get to pick which of their fish to move (assuming there’s more than one that can go forward). Early in the game, players tend to just send the closest fish even closer to the predators—but at some point you don’t want to advance an opponent too far, or they might be able to get past with a lucky roll. Then it’s good to move some of the stragglers forward.

Of course, a lot of the game is still luck-based, no matter how you play it—if you just can’t manage to roll your own color, you’ll find that you have little control over your own fate. But odds are, you’ll roll some predators soon enough, so you can get them out of your own way and put them in front of your opponents.

You do, of course, have to deal with the fact of player elimination, but since each player has four small fish, at least it’s not too terrible when one of them gets eaten by a predator. Depending on your players (particularly kids), you may or may not enjoy that part of the game. Some kids will be okay when their fish are eaten, and will work to get their opponents eaten in turn; others may throw a fit if they feel like they’re being targeted. And, of course, if you run out of fish, you’re out of the game and you have to wait for everyone else to finish. Fortunately, the game isn’t that long, and you can encourage eliminated players to cheer on (or pick on) the players who are left in the game.

Admittedly, Reef Route isn’t a heavy game. Even with adults playing, it’s still going to be more of a filler game than the main title for a game night for me. But, as with King Frog (also from Brain Games), I was pleasantly surprised to find a kids’ game that still holds enough interest that I can play with my four-year-old and not get bored. I don’t know that it’s one that I would pick for gamers that don’t ever play with younger kids, but if you’re looking for one that you can share with your family and still break out from time to time with older players, Reef Route is a fresh catch.

Traveling the Planes of Dungeons & Dragons 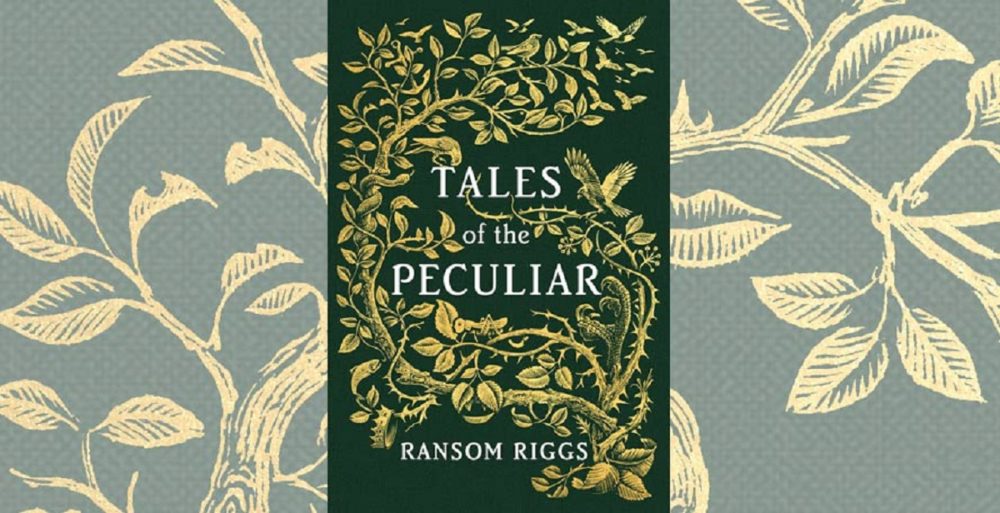