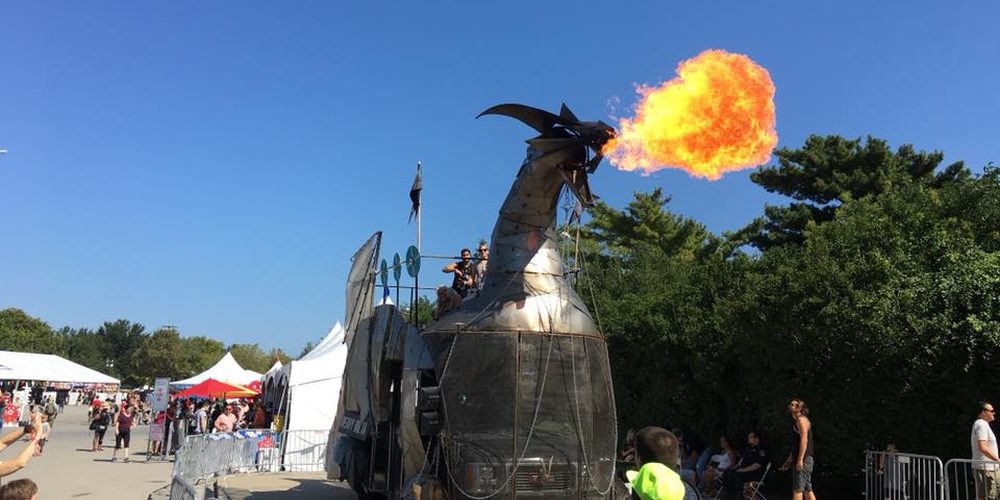 My family and I enjoyed a wonderful time at NY Maker Faire this past weekend. If you are not familiar with Maker Faire, it is a gathering of artists, craftspeople, technologists, and all types of creative people with one thing in common: the drive to share what they love to make with the world. Ever since 2010, the New York Hall of Science in Queens, NY has been home to one of the flagship locations for the annual event.

As you walk in the main entrance, you could not help but marvel at the gigantic fire-breathing metal dragon that hulked just inside the fairgrounds. If you were lucky enough to be there as it shot flames from its mouth or tail, you could feel the heat from its flames as “Heavy Meta’s” crew grinned as they operated their amazing creation. Soon, though, you find there is a nearly overwhelming number of sights, sounds, and smells to draw your attention. This is Maker Faire.

Many makers bring hands-on activities for participants to try, and there are areas of the fair designated for young makers, which is great for families. Little kids squealed with glee as the parachutes they made at the Brooklyn Robot Factory table shot into the air propelled by a fan. At another table nearby, they could pick an un-decorated stuffed animal and add button eyes and crazy yarn hair and take home a new friend. Kids of all ages got to try the role of a forensic scientist at Kaleidoscope Enrichment’s table, and analyze photographs, animal tracks, hair samples, and DNA evidence in the search of the mythical “Catscquash.”

Inside, there were digital artworks involving sights and sounds. You could record your own audio rant and hear and see a computer processed version of it. You could play a musical chair, literally. Another art piece captured a still image of your silhouette on the wall, and then added life to it by replaying your shadow in motion across the screen. Downstairs there were interactive holographic displays, chain link and 3D printed wearables, and fiber arts galore. EunChan Park was jamming with his musical BuskingBots all weekend.

Outside, there were robots, 3D printers, laser cutters, and other digital fabrication tools. I saw watchmakers, a 3D printer for chocolate, and a hackable coffee maker that lets you control every aspect of producing the perfect cup of joe. There were also makers focused on the environment, on tools for nurses, and at least two drum kits that played themselves.

One of my favorite kits I saw was the PinBox 3000, a cardboard cut kit that you could assemble and customize. You could even link to sets back to back. A demo setup showed four pinball games all connected together, and each player’s ball had a chance of getting into another player’s game.

More Chances to See and Do

We always come back from Maker Faire re-fueled with creative ideas for the future, but also hungry for more maker fun. If you were not able to come to Maker Faire in New York, there are many other Maker Faire events throughout the U.S. and around the world. As the hundreds of makers displaying their stuff prove every year, there are clubs, makerspaces, and small businesses out there for you to check out.

If you missed out, you can catch nearly eight hours of live video coverage below. Expect to see more videos pop up on the Make: and MakerFaire YouTube channels.