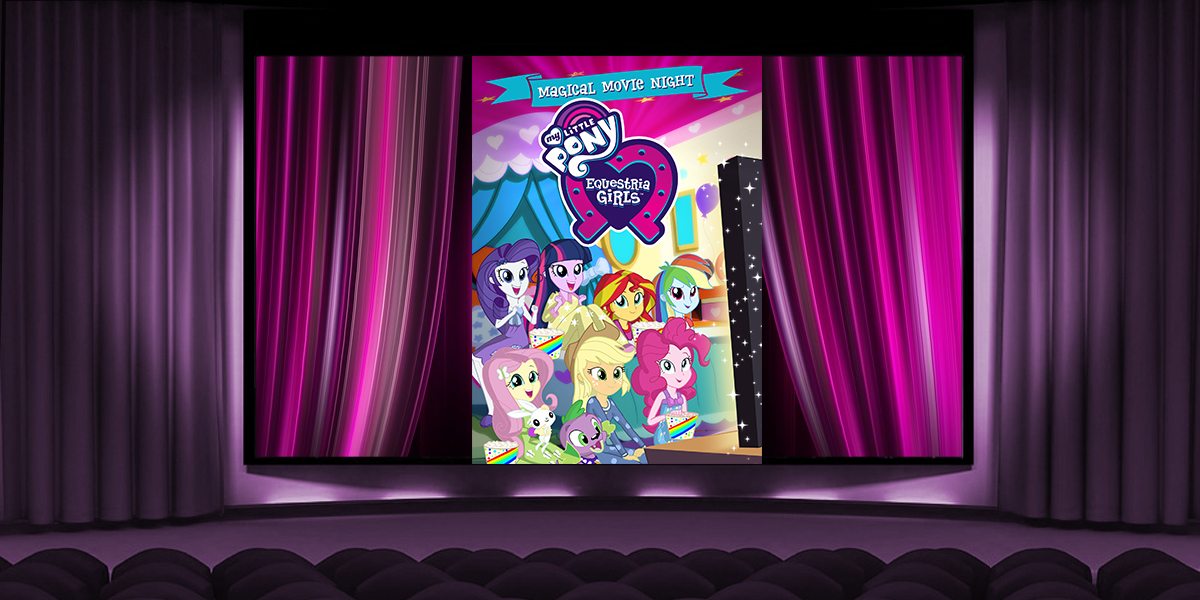 My Little Pony: Equestria Girls – Magical Movie Night is an hour of pure fun. Included are three episodes of MLP dedicated to the Equestria Girls world and we get to see what they’ve been up to since they saved Camp Everfree in their last DVD movie. I think it’s a nice change from the animated movies they’ve been turning out every year.

Even as an adult I enjoyed each of the three episodes and one even hit home for me.

Episode 1 – “Dance Magic”
The girls are trying to raise money to make repairs to Camp Everfree. Rarity comes up with a brilliant idea to compete in a music video competition but it puts all their fundraising on the line. There’s an underlying message of keeping your trade secrets close to your chest in this one. Crystal Prep makes a special appearance in this one.

Episode 2 – “Movie Magic”
The Equestria Girls are invited to the set of the new Daring Do movie and trouble arises when costumes and props go missing. There are quite a few references in this one so keep your eyes open. (Hint. It involves superheroes and a popular Marvel director.)

Episode 3 – “Mirror Magic”
Sunset Shimmer runs out of pages in her journal and heads to Equestria to get a new one from Twilight. When she passes through the mirror though it’s Starlight Glimmer that meets her and after a little begging Sunset agrees to take her to the human world. This episode follows up with “Movie Magic” so make sure you watch that one before “Mirror Magic.”

Episode 3 was my favorite because Starlight was learning a lesson that I’m currently struggling with myself. I guess sometimes you need a pony to hit the nail on the head and then everything makes sense.

My Little Pony: Equestria Girls – Movie Night is available to own starting today at your local DVD retailer.

Now, who’s ready to add this to their collection?

One lucky winner will win the My Little Pony: Equestria Girls – Movie Night DVD.  The giveaway will be open until Friday, August 11th at 11:59PM Eastern Time. Good luck!