I have two boys, ages 10 and 7, who love games. My oldest likes fast-paced games that minimize luck and focus on strategy. My youngest really enjoys card games of all types. Last week at Gen Con, I kept my eyes open for games that would appeal to each of my sons; finding a game that both love to play can be difficult, so I focused on finding one or two games that each of them would enjoy playing with Mom or Dad or a friend. Over the next few weeks, I’ll be reviewing some of these games here on GeekDad, and I’d like to start by pointing you to a new Kickstarter card game called Ink Monsters. I was lucky enough to score a prototype deck to bring home from Gen Con and introduce to my youngest… 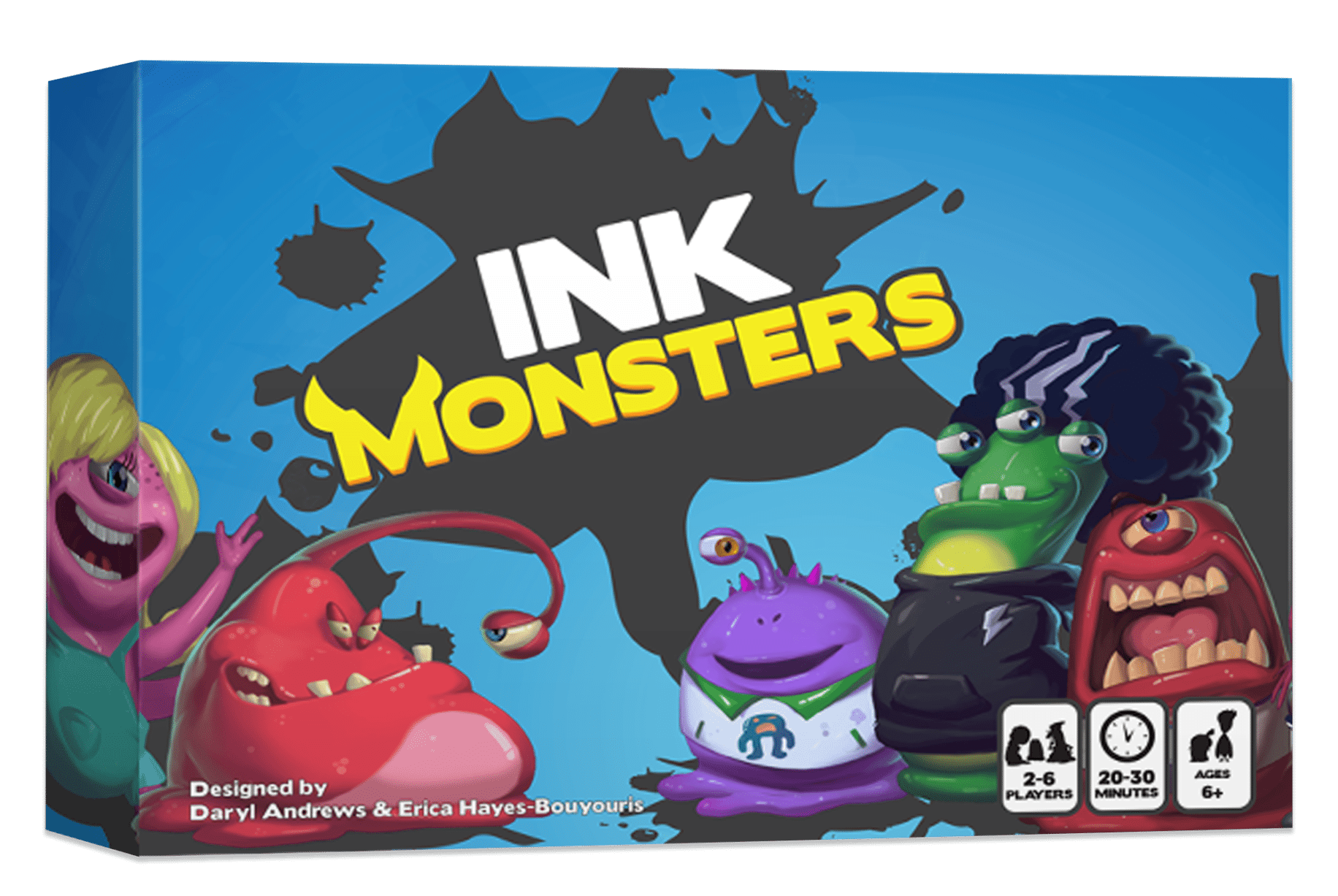 Backing the game is a no-brainer for me — he loves Ink Monsters.

It’s fun, very fast to play, and the rules are simple enough to follow that he is quickly figuring out how and when to play certain cards to maximize his score. When one game ends, he wants another. That’s a win for this dad. I had a strong suspicion he’d enjoy the game when I saw the instructions—two pages, a visual setup followed by four simple steps that he was able to read on his own… and then the end game that involves nothing more than some addition and subtraction. (Trust me—my youngest LOVES calculating his own score, and I’ve learned many times over that he’s accurate. No need for Dad to double-check his math.)

The layout of the game is simple, and I let my son do it because so many of the games we play require a little more attention to detail for the setup. Not Ink Monsters. Take 12 Monster cards and arrange them in a circle. The youngest player goes first—always a winning move for any game! A Directional Marker card is placed in the center of the circle (clockwise and counter-clockwise), an Ink Pen card above any Monster card, and all players are dealt three Action cards.

Each Monster card has a value on it from -5 to +5. There are also cards that will modify your score based on how many collections you own. Collections are defined by small icons on a card such as a shirt, or pig-tails or a tooth… or even the color of the card. Some Monster cards provide bonus abilities that can affect your score or modify the movement of the Ink Pen card by you or another player. I can almost hear the gears spinning in my 7-year-old’s head as he plots out his Action card moves, vying to move the pen to the perfect Monster. And, of course, he has to take a moment to read out the names of the various Monsters and laugh at the funny images on each card.

Ink Monsters is for ages 6+ and supports 2-6 players. The instructions state the game takes between 20-30 minutes, and that’s fairly accurate with my two-player games with my son. (He wants to take the deck to school to show his friends, but it’s got to be returned AND the students rarely have 20+ minutes of free time anyway, but I’m still pleased that he wants to share the game with his buddies.)

Backers can grab a copy of Ink Monsters for $19, and stretch goals are planned to make the deck even more fun. (For $100, you can name a card!) You can check out the Ink Monsters Kickstarter project here and watch the video that gives a basic game overview.

All in all, though… the rules are easy to pick up and the game plays fast. Anytime my son wants to play a game more than a few times, I know it’s a winner. The cute monsters and the twists and turns from the Action cards and Monster abilities make the game fun, but the fact that my youngest can setup the game, score it himself, and feels confident teaching it to his friends? That’s what we gaming parents absolutely love.

Note: My son would like to thank Erik with Albino Dragon for providing us with the Ink Monsters prototype deck.