For months, I’ve been stuck in the High Sierras, snowed in and trapped. Supplies were gone weeks ago. Last month, we decided to eat Ned’s dog. Two weeks ago, his horse. We’re starving now and, if I’m perfectly honest, Ned is starting to look pretty tasty…

Donner Dinner Party is a bluffing and deduction game for 4 to 10 players, aged 12 and up that plays in about 20-30 minutes. Pioneers hunt for food to feed the starving group for another week while Cannibals hope to eat one of their party instead.

As I was growing up, the story of the Donner party was one often discussed, we were amazed at the conditions that might drive a person to resort to cannibalism. However, when I sat down to play this game with eight kids, all under the age of 18, none of them had heard of the Donner Party before. So, briefly, the Donner Party was a group of 87 pioneers from about a dozen different families who were headed to California in 1846. A number of mishaps befell them; they left late in the season, they tried an untested route, and they were stranded by a heavy snowfall. That November, they became trapped in the Sierra Nevadas that mark the border of Nevada and California. Four months later, they were rescued and only 48 survived, many because they had slaughtered and eaten their oxen, horses, dogs, and a number who had eaten their fellow travelers to stay alive. There’s a lot more to it and you should read more if you are interested, but this year marks the 150th anniversary of a very morbid event in our national history. 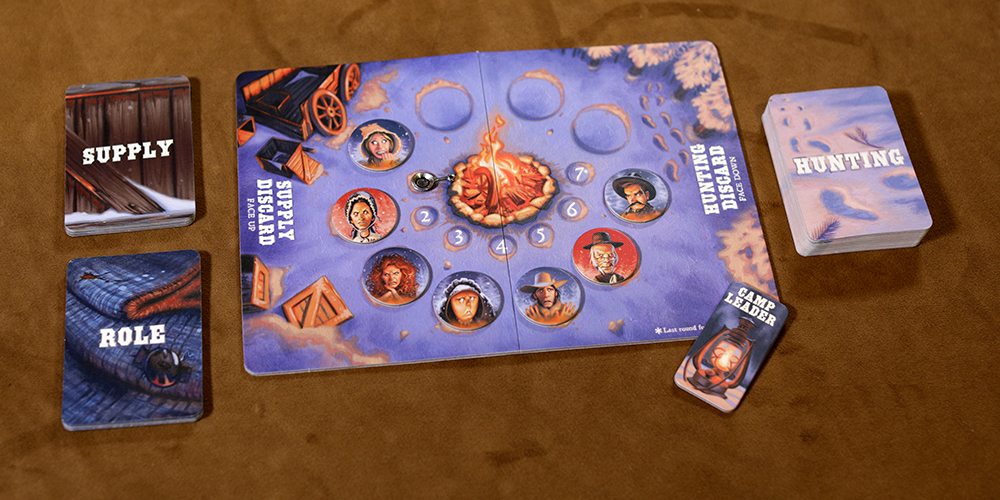 The artwork is off-the-charts great. All of the illustrations are wonderful and I’m really impressed with the overall game. The game board is a neat, top-down view of a campfire, with spots for each of the game’s players. Not an inch of the rulebook, box, board, or cards is ignored when it came to art and design. The frying pan is a, uh, tasteful touch and a clever way to count off the rounds (six rounds for 4-6 players, seven for 7-10), with the pan rotating around the campfire. Even the rulebook shows a wood and leather-laced binding.

All the tokens are double-sided and thick, juicy, *cough* nice cardboard. There’s a high degree of detail to everything from the back of the board to the box and it all is very nice. The cards I am less impressed with. The art is great on them; the caricatures are all very well done and the expressions on their faces are pretty funny. However, the cards are so flimsy that shuffling presents a real challenge. The quality isn’t bad—I don’t worry about the paper tearing or anything like that—the stock just isn’t stiff enough. I’m not really sure what happened here, whether the wrong paper was specified or what, but it’s quite noticeable and, for a game that involves a fair amount of shuffling, it definitely leaves a bad taste in your mouth, errr, is a bit disappointing. Luckily, you only have to shuffle a handful of times in the game. There’s not a lot to Donner Dinner Party. It’s a small box game, but what’s there shows a lot of thought in its design and artwork. 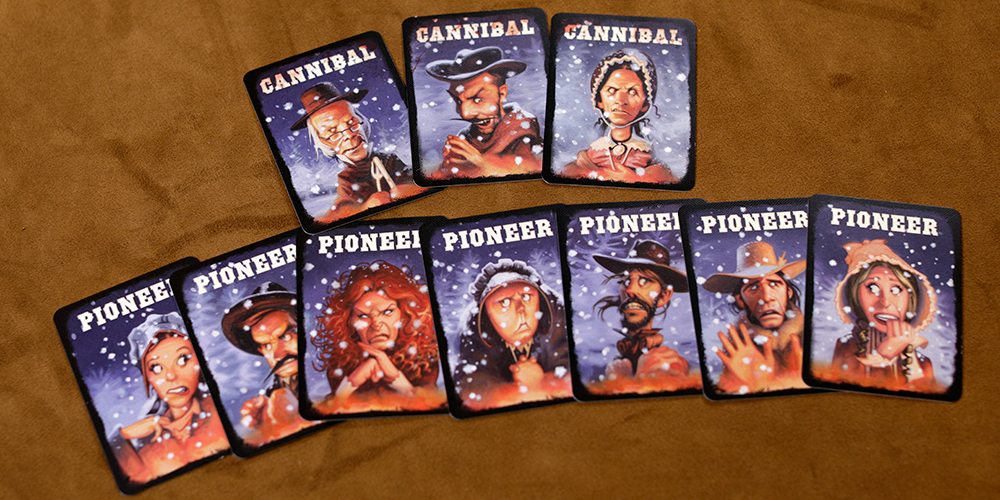 I think the easiest way is to begin play is to choose the Camp Leader for the first round. This is a bit out of order from the rulebook, which suggests this occur later, but by first choosing the Camp Leader, that person can set up the game. The Camp Leader assembles a Role Deck based on the number of players. For four players, a single Cannibal Role is added, two anthropophaginians for 5 to 7 players, and three of them for 8 to 10 players. The Camp Leader fills the rest of the deck, according to the total players, with Pioneer Role cards and chooses the corresponding tokens, arranging them around the campfire on the board. They place the frying pan on round one and shuffles the Role Deck before dealing a single card to each player. You may look at it, but no one else can.

Next, the Camp Leader shuffles the Hunting Deck and the Supply Deck. Each player gets a single card from the Supply Deck, which provides them with a special ability during the round. These are also kept face-down so no one else can see them. Prior to dealing the Hunting Card, everyone closes their eyes and the Camp Leader makes an announcement allowing the Cannibals to open their eyes and recognize each other. 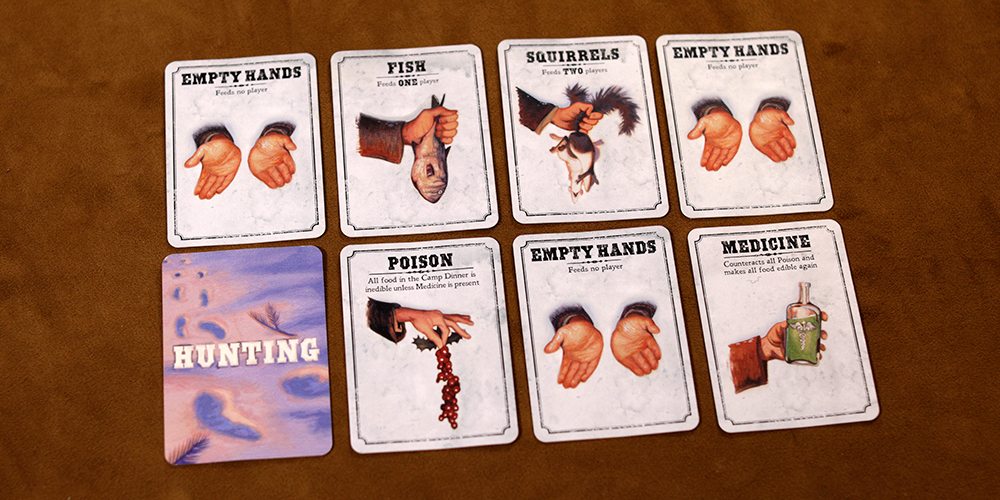 The Camp Leader deals a single card from the Hunting Deck to himself before dealing three cards to each of the other players. Hunting Cards have one of five faces on them. There are eight fish cards, which feed a single player; six squirrel cards, which feed two; fourteen empty hands, which feed no one; and seven poison cards, which makes all the food inedible, unless one of the five medicine cards is present. Players look at their cards before choosing one to contribute to the camp’s dinner. Pioneers want to feed the others, cannibals, less so. Cannibals might donate empty hands or, worse yet, poison. Pioneers might contribute a fish or squirrel, if they have one, or medicine–just in case a poison card shows up at dinner. Before turning their cards in, the Camp Leader can choose a player and look at their Hunting Card. He can’t show it to anyone, but he can discuss it.

Next, the Camp Leader collects the Hunting Cards, shuffles them, and turns them over. If there’s poison, all the food is inedible unless someone played medicine. (A single medicine will counteract multiple poison cards.) The amount of food is tallied and it’s determined if there is enough food to feed the number of players still in the game. If there is enough food and it’s edible, the round advances, a new Camp Leader is chosen, and the process begins again. If there’s not enough food, the living players participate in a Group Vote to decide who, among the living, will be eaten so that the group can survive another week. 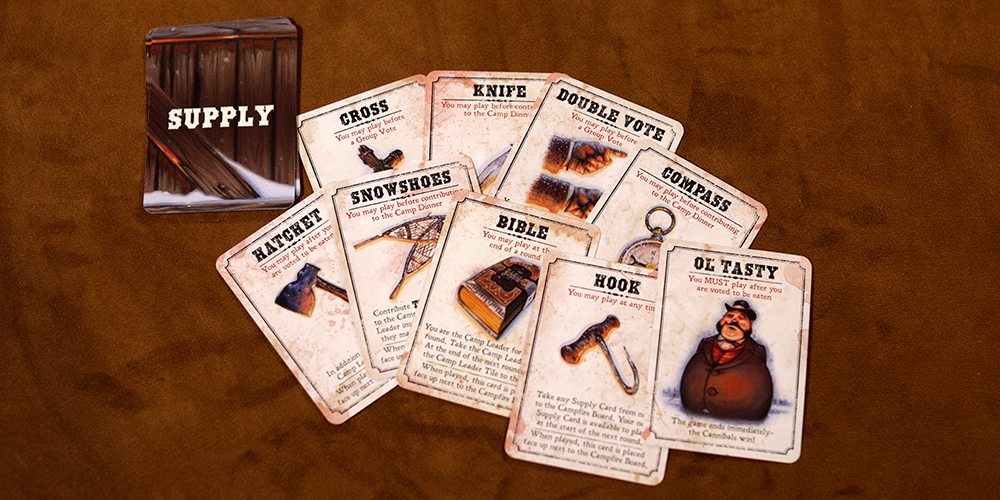 Supply Cards provide players with a special power that can be played at different time during the game. A player might get extra Hunting Cards during that distribution or be able to take the Camp Leader to the afterlife with her if she is voted to be eaten. Discussion commences and, after two minutes, the Camp Leader calls for a vote. Players can’t vote for themselves and ties are broken by the Camp Leader. The player that is eaten is out of the game and removes his token from the campfire. If he still has a Supply Card, it is placed face up near the campfire board. Play then moves to the next round. At the end of a round, if all the Cannibals have been eaten, the Pioneers win. If the Cannibals equal or outnumber the Pioneers, the Cannibals win.

Why Should I Add Donner Dinner Party to My Collection?

There are probably some that will find the game to be an unusual choice of theme and probably some who will be offended, because that’s the age we live in. It is a game based on a tragedy, but it’s also one that has a lot of time on its side. That horrible winter when the Donner party made choices no one should have to happened back in 1846. Time heals all wounds.

But once you get past the idea of chomping down on your fellow travelers’ choicer cuts, Donner Dinner Party is really a pretty fun game. On a recent beach vacation, I brought about a dozen games, representing a variety of mechanics. Donner Dinner Party was, by far, one of the most played games. We all had a blast trying to work out who the Cannibals were in our midst. We would play over and over and over, night after night.

My only complaint is that, if you get eaten in the first round, you will spend a lot of time sitting around, waiting for the next game. Fortunately, the game also comes with a couple of variants. In Ghosts, the player token of the eaten player gets flipped to its opposite side, which presents a caricature in negative, appearing apparition-like. A player playing as a ghost retains her original role and communicate with alive players, but can no longer use words, only sounds. Further, the Ghost can trade in her token once. When she does, she can place it in front of any player and shout “BOO!” By doing this, that alive player is not included in that round’s voting. 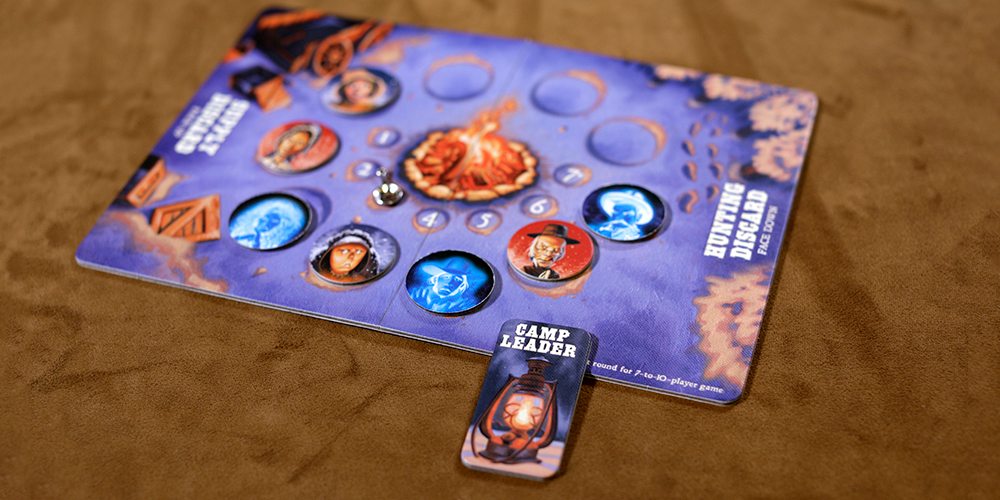 There’s a second variant that’s fun too: the Ol’ Tasty Supply Card. If someone is dealt this card as their Supply Card, they are Ol’ Tasty in addition to their Pioneer or Cannibal role. They are so tasty that, if they are voted to be eaten, that the whole party converts to cannibalism and the Cannibals automatically win. Plus, because there is a maximum of 10 players and 12 Supply Cards, you’ll never know if Ol’ Tasty is in the game or not. It adds a really fun twist.

Most bluffing and deduction games just give you a role and turn you loose against each other. Because Donner Dinner Party tasks you with making a choice in your Hunting Cards, allows the Camp Leader to look at one, and provides you with game-changing Supply Cards, it is a very unique and very fun game. Like any game in this category, there is a lot of tension. Accusations, deceit, and alliances make for a very animated game. The Camp Leader may provide truthful information about the player’s Hunting Card that’s examined or may tell a lie about it. During the discussion that leads to the Group Vote, players may claim Hunting Cards that are theirs or someone else’s. And because Cannibals know who else has that role, they may employ various strategies to try to manipulate the Pioneers into eating one of their own. 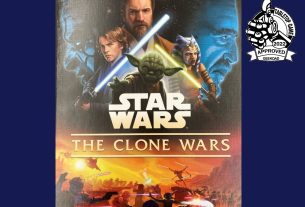 Lead the Grand Army of the Republic in ‘Star Wars: The Clone Wars–A Pandemic System Game’ 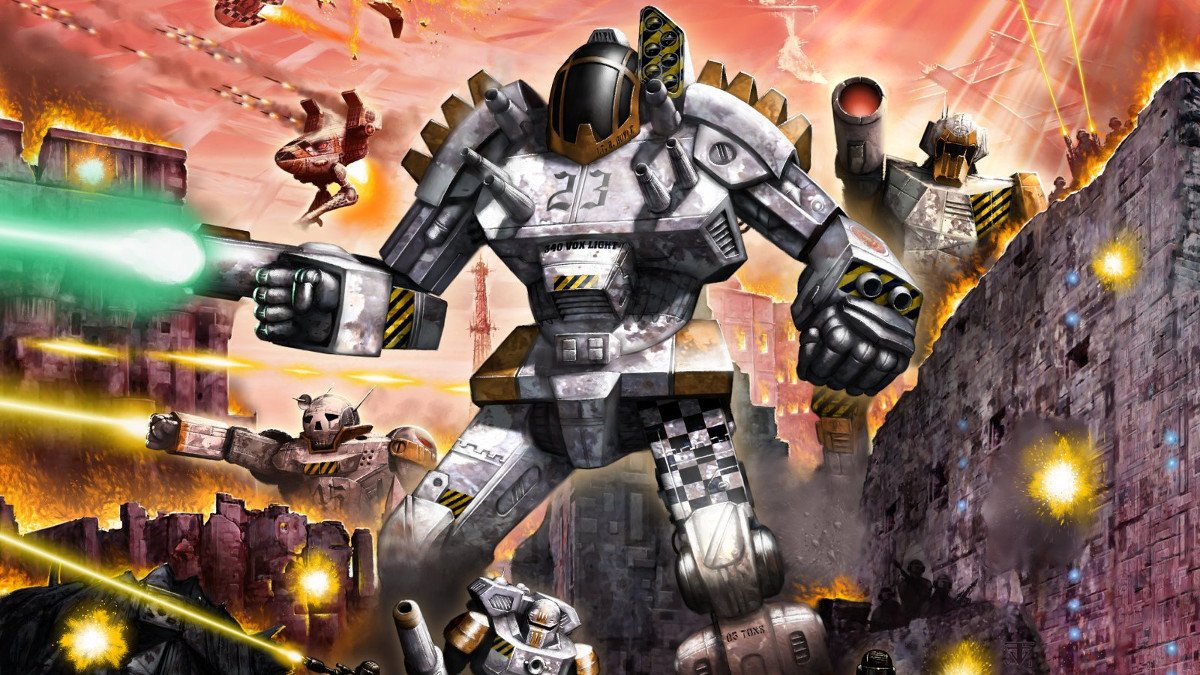 Back to the Table With a New ‘BattleTech’