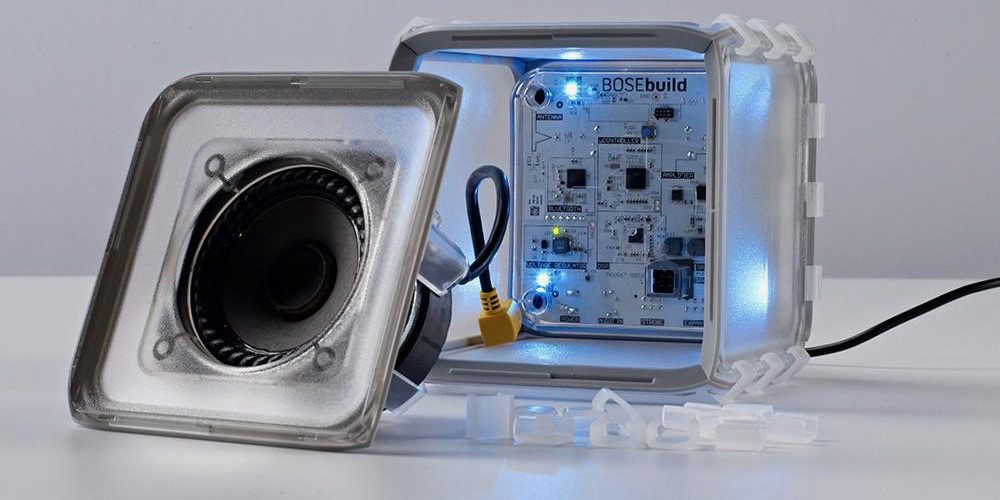 I can’t remember the last time a technology product made me laugh out loud while assembling it (and in a good way). The BOSEbuild Bluetooth speaker let me be a little kid again, even if it was for just a few hours. Let me get this out-of-the-way right up front, this product is NOT just for kids. I initially intended to just assemble the BOSEbuild with my 12 year-old daughter, but after getting into the first physical step of the assembly and learning process (and laughing out loud several times along the way) I called my 15 year-old son into the room and he ended up staying through the entire build.

The first step in the BOSEbuild Bluetooth speaker assembly process is to download the free BOSEbuild Sound app for iOS. The app that guides you through the build and learning process is strictly iOS only, so you will either need to own or borrow an iOS device for a few hours. The iOS device must be running iOS 8 or higher and can be as old as an iPhone 4S (or newer), an original iPad mini (or newer) or even an iPod Touch (5th or 6th generation). See the BOSEbuild website for a list of all compatible iOS devices. Once you have completed the entire build and have a fully functional Bluetooth speaker you can use any device that has a 3.5mm AUX jack or Bluetooth 2.1 or later to play audio through the speaker.

Step 2: Learning About & Playing With Physics

Once you have the app installed on your iOS device all you have to do is simply follow the instructions in the app. The BOSEbuild Sound iOS app is very well designed. It’s easy to use, walks you through the entire process one step at a time and incorporates good use of automated technology (like listening for the speaker to make certain sounds to verify you have configured the speaker correctly before moving on to the next step). If the animated and visual instructions provided along the way in the app aren’t quite clear enough for you, press the “?” icon on the corner of the screen and in most steps there is a video available that demonstrates what you are supposed to do at that step of the build. There were a couple of times in our build where the video really made things a lot more clear. Plus the two guys in the videos are really into playing around with speaker tech and you can tell they are having a lot of fun (which makes it fun for you too).

I don’t want to go through every step in the learning and building process in detail and ruin all of the fun, but this wouldn’t be much of a review if I didn’t at least explain a bit about what to expect. So once you power up the BOSEbuild control panel and connect it to your iOS device via Bluetooth the next several steps in the build process are what I am calling “build, learn and play” steps. Before you build the actual speaker box you build up smaller and less complex sub assemblies of some of the critical parts that make up a typical speaker. The first main components you “build, learn and play” with are the coil and magnet. The magnet is pretty self-explanatory and the coil is simply a metal piece with a cylindrical center and within the center cylinder there are a bunch of small wire wrapped around the center to make up the coil (you don’t see all the wires as they are beneath the surface). The next several steps has you use the two basic pieces (the magnet and coil) to demonstrate the basic mechanics of the speaker. First you get to turn the coil into an electromagnet and launch the coil off of the magnet base like a rocket (don’t worry, it’s not that fast of a launch and no smoke or fire is involved). This demonstrates a key application of physics that is crucial to make a speaker work and that is the electromagnet. If you run electrical current through a coil of wire you can turn that coil into a magnet. Then by controlling the characteristics of the electricity flow you can change the strength and polarity of that electromagnet. So now that you have a magnet base and a coil that is resting on that base that you have turned into an electromagnet, you have two magnets in close proximity. Then if you setup the polarity correctly the magnets repel each other…hence the launching effect. The BOSEbuild process takes you through this demonstration and several more steps that show you the mechanics behind a working speaker and then lets you play with those mechanics:

Once you have completed all of the building and learning activities the app walks you through the build of the actual speaker unit. The construction is actually quite simple as it involves the main control panel (which becomes the back of the speaker cube), the internal speaker mechanism and the speaker box. The speaker box is held together with 36 plastic clips and these clips not only hold the box together but they also give you a mechanism to hold your speaker design insert in place…pretty clever.

When I first saw the inserts that came with the speaker I was a little confused as to how they would work. While they are made out of a pretty thick paper they are still pretty flexible. But once my daughter picked out the design she wanted and installed the design inserts on each of the sides of the cube using the clips to hold them in place, the inserts were surprising sturdy. Then when you turn the speaker on and get the internal color glow going the speaker looks really sharp.

The designers did a nice job here of finding a very simple way to allow you to customize the speaker box design but also keeping the material and fastening mechanism easy to install and effective. When you are designing a products for kids this is a really important thing to consider and it’s obvious the folks at BOSEbuild had simplicity in mind when they designed this.

Now that you have a complete and fully functional Bluetooth speaker, how does it sound? I own a BOSE SoundLink Mini Bluetooth speaker. The BOSEbuild and the SoundLink Mini are similar in price, size, weight and most importantly sound quality. Both of these speakers sound really good in a small room or even outside in the garage. I couldn’t tell much of a sound quality difference between these two speakers, so that means the BOSEbuild speaker is no toy. When you are done learning and playing you have a high quality BOSE Bluetooth speaker. But actually you have more than that. With the BOSEbuild speaker you also have a little mini dance party in a box because you can customize the speaker to flash different colors based on the frequency of sound coming out of the speaker. Assign different colors to the lows, mids and highs using the BOSEbuild Sound iOS app. Then when you aren’t using the BOSEbuild Sound app you can use the Power/Mode button on the control panel of the speaker in conjunction with the Color Slider (which is also on the speaker control panel) to switch between color modes and settings for the speaker. You can configure the speaker to glow a constant color, gradually change through a wide variety of colors or have the speaker change color based on the type of sound being played at that moment. Like I said, its a mini disco in a box!

Obviously since I already own BOSE products I might be a little bit biased in my opinion, but lets put sound quality aside for a moment. The BOSEbuild as an educational system is not only a heck of a lot of fun but it also very effective. The entire build process was simple enough for my 12-year old daughter to do the built herself but engaging enough to keep me and my 15-year old son completely engaged and totally entertained. As an engineer I am always tempted to take things apart so I can figure out how they work, so the hands-on approach that BOSEbuild took with teaching kids the mechanics behind speaker technology just flat worked. Add in the ability to customize your speaker with design inserts and color and the ability to re-connect the smaller learning components to the back of the fully built speaker at any time to re-perform any of the lessons and you have yourself a very impactful educational package. There is one other important thing about this speaker and that is that it requires AC power. There is no internal battery. Since this speaker is designed to be used by a child and is designed to be built and taken apart by a child, it isn’t going to be super rugged so it really isn’t a speaker you are going to want to take with you a lot of places. Given all of that I think it makes sense for the speaker to have to be plugged into power. The supplied AC power adapter and cable are long enough to be used in most places you will want to use it in your house.

Now, coming back to the sound quality. The BOSEbuild completed speaker, in my opinion, is on par with other Bluetooth speakers in the same size and price range as the BOSEbuild (except with the BOSEbuild you get all the educational and customization bonuses). You aren’t going to get amazing large room filling sound with any small Bluetooth speaker, but for small rooms and a for small groups of people these speakers perform really well and the BOSEbuild is no exception to that. After you have completed the build I think you will find that the BOSEbuild will make a great speaker for listening to music while doing homework, playing video games or having a family game night at the dining room table.