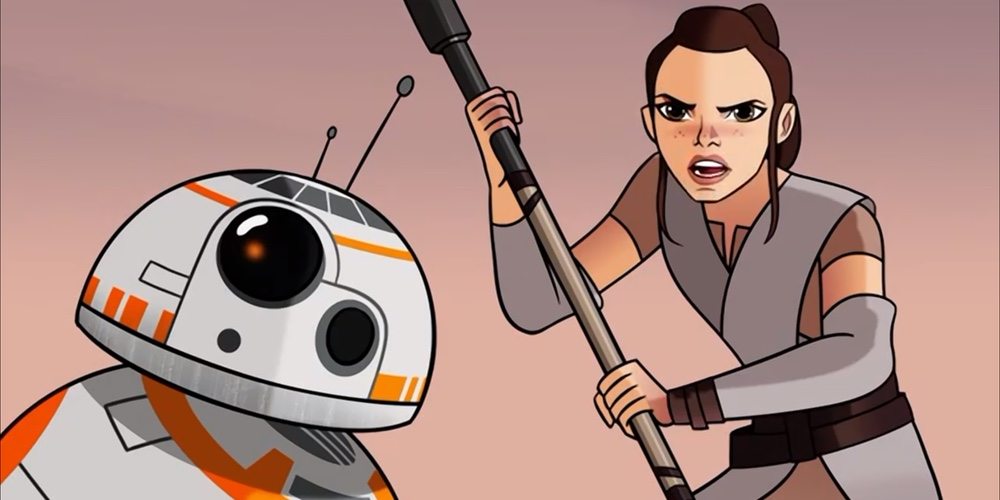 If you missed yesterday’s Forces of Destiny debut on YouTube, well, let’s fix that right now:

The first short “Sands of Jakku” focuses on Rey and BB-8 and takes place pretty much immediately after their first meeting. For a two and a half minute short, it gives us a solid amount of character development, highlighting Rey’s compassion while still providing a solid dose of action, giving us what would be, canonically, our first glimpse at Rey’s force sensitivity. Since these all take place in the established Star Wars canon, part of the fun is figuring out where they fit in the movie timeline (for instance, there’s a certain set of stolen plans being passed around in the teaser trailer).

Additional episodes will be posted each day this week at 1 PM EST (10 AM PST) on the Disney YouTube channel, with all the shorts debuting together on the Disney Channel this Sunday, July 9 (which has the added bonus of not being anchored down with YouTube comments complaining about the animation and HOW DARE THEY FOCUS ON WOMEN…sigh). It’s all leading up to the merchandise debut on August 1 (you can read more about the tie-in toys here).

In addition to further adventures of Rey and BB-8, the other shorts will have us following Sabine, Jyn, Leia, Amidala, and Ashoka as they wind their way through the Star Wars universe. With such a wide swath of time (and the fact that it’s impossible for some of these characters to have ever met), it doesn’t look like there will be a central storyline to pull these all together (though as I mentioned above, there will certainly be callbacks to other stories).

But that’s okay – if all Forces of Destiny gives us is story after story of women in Star Wars being the awesome ladies that they are, that’s all I really need. I’m hoping we’ll get at least one more week of shorts somewhere in July. Seven episodes just isn’t enough.