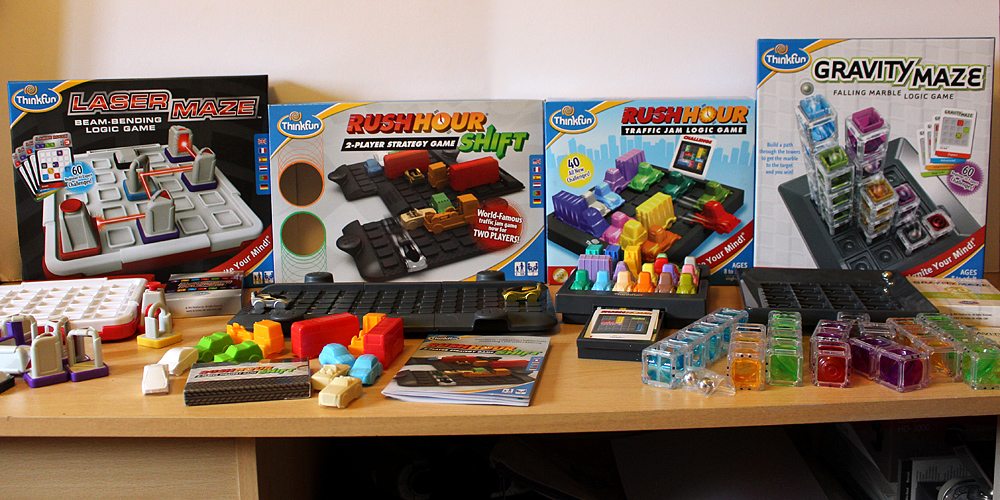 ThinkFun games are puzzles that test your logic skills. The majority are single-player puzzles, but some multiplayer games are available as well.

Of the four ThinkFun games we tried out, Gravity Maze and Laser Maze are broadly similar, so we’ll begin by looking at those. Both are single-player puzzles designed to give your logic skills a workout rather than being competitive, and both games come with a set of 60 puzzle setup cards starting at beginner and progressing through intermediate, advanced, and finally on to expert. The front of each card shows how to set the puzzle up, and the solution is shown on the reverse.

In Gravity Maze, you set each puzzle maze up by placing colored towers and the red receiving block on the grid exactly as shown in the picture on the front of your card. Each card also shows the colors of the additional blocks you will be allowed to use in order to solve that puzzle. The aim is to drop the marble into the starting tower and have it end in the red receiving block using only the additional pieces shown. Each card in the stack has a different starting setup which increases in difficulty as you move through the deck. In Laser Maze, setup is much the same and is done by placing the laser, receiver, and any other required pieces on the grid as shown. The aim here is to press the laser button and see the receiver (or receivers in later cards) light up, using only the pieces allowed as shown on that card.

Of the two, we found Laser Maze to be significantly more difficult. In Gravity Maze, you can work through each puzzle step by step, adding a piece at a time and running the marble through to see where it ends up, then adjusting as necessary. In Laser Maze, however, you can only see the laser if it is hitting a receiver (unless you plan to fill your room with smoke)–therefore, if you have placed a piece in the wrong place and sent the laser off somewhere incorrectly, you can’t tell as easily where you are going wrong. Of all the games we tested, Laser Maze ended up being the one we went back to the least, something that surprised me as I had assumed my seven-year-old would be all over getting to play with his very own miniature laser.

Rush Hour is similar to the two previous puzzles but does not involve adding in any additional pieces. Instead, each card shows how to place a number of plastic cars and trucks onto a six by six grid. The goal of this puzzle is simple, slide the red car out through the gap in the side of the grid. Each vehicle can slide back and forth along its row or column in the grid, but cannot turn or move sideways. This was by far our favorite of the four ThinkFun games and puzzles–appealing to everyone from my seven-year-old son to his grandparents and myself. We found ourselves timing one another to complete cards and good-naturedly mocking each other whenever we got stuck: “You’re stuck on number 15?! I solved that in under 30 seconds!” A number of expansions are available for Rush Hour once you have completed the 40 cards that come with it, these each give you 40 extra cards featuring new challenges and a new vehicle to play with. There is also a Junior version of the game (recommended for kids age five plus) that includes an ice cream van, a “Deluxe” edition with shiny vehicles and 60 cards instead of 40, and even a Safari version where you must free your truck from roaming zebras, lions, and elephants. There is also an official app that contains 2,500 challenges to solve, and you could easily use the app as a set of additional cards by setting up its challenges on your physical copy of the game.

Finally, we played with Rush Hour Shift. This is the only one of the four ThinkFun games we tested that is multiplayer, a two-player game rather than a puzzle. The game is based on Rush Hour and works on a similar principle, drive your car off the opposite end of the board. However, your opponent is also trying to drive their car off the board before you can remove yours and may try to block you from moving. The game gets its name from the board which is divided into three segments which can shift sideways past one another, rather like tectonic plates. This action can be used to prevent your opponent from moving their car forward or to give yourself a clear path to victory.

The game is very simple. The board is set up using one of the 10 illustrations in the rule book, the cards are shuffled, and four handed to each player. On their turn, players choose one of the cards and perform the matching action, finally drawing a new card from the deck to take their hand back up to four.

There are only four different actions available, making this a very simple game to learn, if not to master. The four types of cards are:

The winner of the game is the first to slide their car all the way off the far end of the board.

We fell in love with all the ThinkFun games and puzzles we played with and are already eyeing up more titles from the company’s vast library–personally, I’m especially excited about their forthcoming Rollercoaster Challenge game which was successfully funded on Kickstarter earlier this year. They are games I would happily purchase as presents for other children, a category of toys and games I heavily restrict for the sake of not forging enemies among my fellow parents!

It was wonderful watching my electronics-obsessed son become so engaged with something that didn’t involve screens or apps of any sort; in fact, the only batteries required across all four of the games we tested were for the laser pointer in Laser Maze. Both the Rush Hour games came with good quality storage bags to keep them organized, which also make them great for traveling and I especially liked how the cards for Rush Hour slotted into a hidden draw in the game’s base.

I would strongly recommend all the ThinkFun games and puzzles we tested, and am eager to try more from the range in the future. 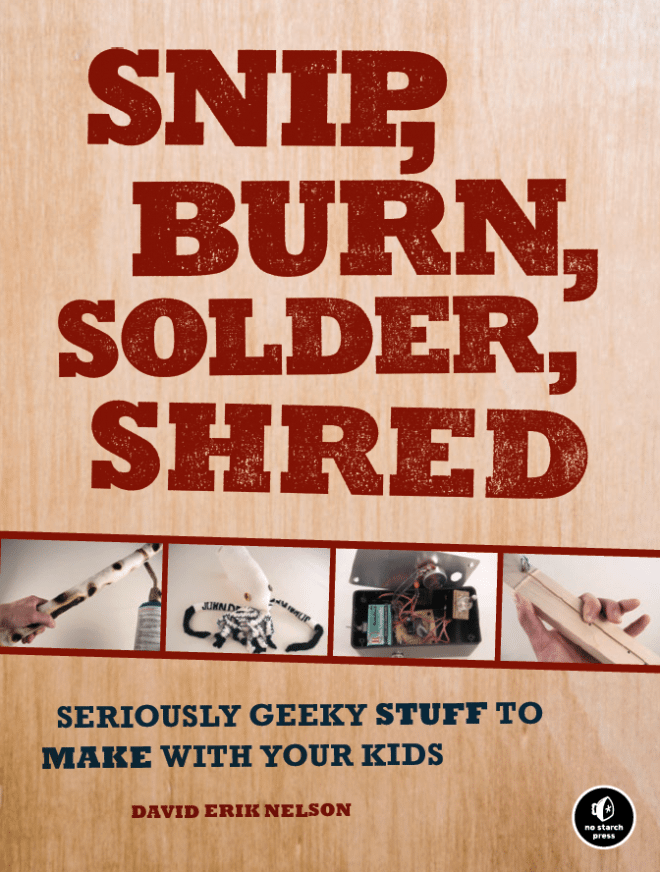 2 thoughts on “Exercise Your Logic Skills With ThinkFun Puzzles”