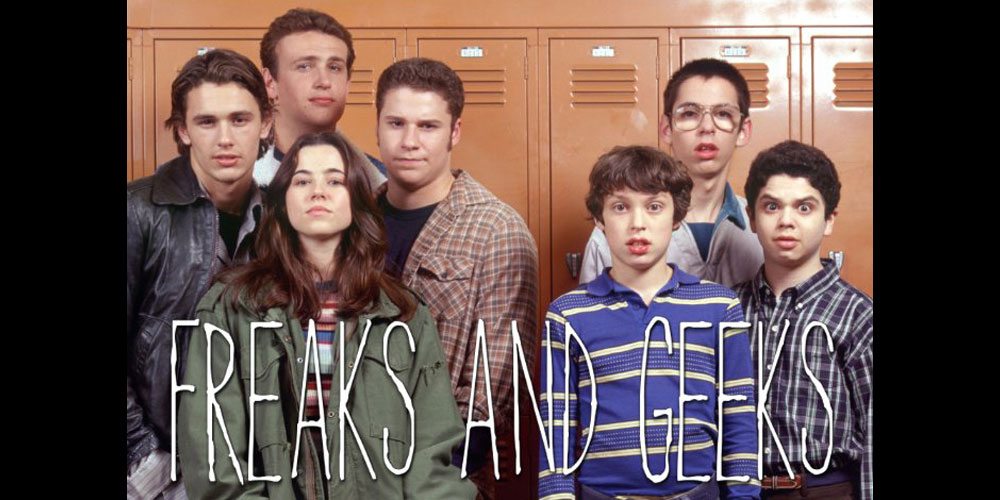 For the past year or two, I’ve been getting to know a group of high schoolers as they struggle to figure out who their friends are, who they are themselves, and where they’re headed. Okay, yeah, they’re all fictional teens from the show Freaks and Geeks, but I’ve really enjoyed (finally) watching the show, and thinking about my own kids because my oldest will be starting high school soon herself.

First: I know, I’m about 17 years late to this party. Freaks and Geeks aired in 1999–2000 and only lasted a season (alas), and it’s been available on DVD for over a decade, and it’s even been on Netflix for a few years now. Like I’ve said before, I’m a very slow binger. The actors from the show are all at least in their 30s by now (Lindsay Weir is the oldest, at 41), well past the awkward teenagers they portrayed. But I can attest that the show still holds up—maybe particularly for those of us who grew up in the 1980s, when the show is set.

In case you—like me—are late to the party and aren’t familiar with it already, Freaks and Geeks centers on two siblings, Lindsay and Sam Weir, as they navigate the complicated social landscape of high school. Lindsay has started hanging out with the “burnouts”—the title’s “freaks”—as she tries to shed her former image as a mathlete and good girl. Meanwhile, her younger brother Sam and his friends are the “geeks”—they’re part of the A/V club, play D&D, and get picked on by the jocks.

I related somewhat to Sam and his friends: I was a nerd (surprise!), as were my closest friends, and while I think high school wasn’t quite as terrible as it was for Sam, I also didn’t really fight the label. Throughout the show, Sam sometimes resists being called a “geek,” occasionally trying to change his image, but not to the extent that Lindsay does. As an adult, I felt sorry for Lindsay sometimes, the way that she has trouble finding acceptance with her new friends. She wants to be cool, but she does still care about her grades, and it’s hard for her to relate to the kids whose ambitions don’t include academics. It takes some time for the freaks to really accept her as one of their own, and it feels like the relationship is set back every time she achieves something.

But as the show progressed (it’s only one season, but there are 18 episodes), I really loved the way that we got to know some of the other characters better. Kim Kelly is something of a bully, and gave Lindsay a really hard time when she first started hanging out with the group. She just seems like a mean girl—until the episode when you meet her family, and realize that she’s coping with her own set of problems, too. The glimpses into the lives of the other characters—both the freaks and the geeks—makes them more sympathetic, and I liked the way that they weren’t simple stereotypes. In many cases, it was hard to watch. What you learn is that even though the Weir parents are decidedly uncool, Lindsay and Sam have it pretty good. They eat meals together, have a nice home to live in, and are kids who probably have bright futures ahead of them. (Until NBC canceled them, of course.)

The show’s not perfect: there are moments that feel Hollywoodized and there’s a distinct shortage of ethnic diversity. But overall it’s a pretty great snapshot of life in the ’80s, when “geek” was a pejorative and not a badge of honor. I think it does a great job of capturing the look and feel of that era without hitting you over the head with it (the way I sometimes felt about Stranger Things).

Having finished the show, I’m considering watching it with my now-teenage daughter, because I think it may be a great way to start conversations about tricky topics like dating or drugs or being a smart girl. And if she sees me the way Lindsay sees her dad—a bit uncool and sometimes overbearing but ultimately caring—then maybe I’ll have done something right.

Before MST3K There Was Creature Features: R.I.P. Bob Wilkins

3 thoughts on “Binging and Cringing With ‘Freaks and Geeks’”