The VIZIO M50-D1 is a 50″ Class Ultra HD HDR Home Theater Display with Chromecast built-in, is affordable quality with a retail price of $649.99. VIZIO offered me a sample in exchange for a review and over the past two weeks I’ve been testing it out with Netflix, Star Wars: A New Hope, The Legend of Zelda and diving into the world of Chromecast (it’s a tough job but someone’s got to do it).

I’ve been a fan of the VIZIO brand for years. The first flat screen my husband and I bought was a VIZIO and we held on to it for as long as we could going as far as getting a sound bar when the speakers died on us.

Here’s what to expect out of this review.

When it comes to TVs  I don’t look for the fancy details or spend hours online researching what to buy. I go online and look at the basic specs like the ease of setting it up, the number of ports it offers, picture and sound quality for the price, and what additional capabilities it has. In the store, I look at similarly priced units and compare the continuous loop of images that they showcase and how big it is in width and depth.

Anyone can look up detailed specs online. You’re not here to read that. You came here to find out what I think makes this TV worth the $649 price tag.

Let’s start with the basics of the VIZIO M50-D1.

Setup from out of the box to casting my first Netflix show was smooth sailing with only a few waves in the form of updates to slow me down. Both the TV and the Android remote needed updates right out of the box.

I’ve never owned a Chromecast because I have an Apple TV. The VIZIO M50-D1 opened up a new world of ease when it came to watching some of my favorite apps on a 50-inch piece of picture quality goodness. With the Chromecast built-in, I have one more HDMI port to use for something else.

Let’s talk about the Android remote for a moment.

The Android remote is 6″ and charges via either a micro USB port or on a wireless charging base. The first thing I suggest you do with the remote is to turn off the notification sounds (unless you like being woken up at 1 AM because of an update).

It has a quad-core processor and 8GB of memory. The core set of TV settings has to be changed via this remote or the VIZIO SmartCast app (available for iOS and Android). There’s also a headphone jack for someone to watch or listen to what they want without taking up the big screen.

And while this might be a tablet with the ability to play games and all, its main purpose is to be a remote. This device is where you change your picture quality and sound settings to suit your personal needs. There are more settings than you can shake a stick at in there but thankfully there’s also a master reset just in case you mess something up.

If you like to have your connections on the TV match what you actually have plugged in, you can change the name that shows up on the TV.

Keep in mind that 8GB of memory is only if you have it completely cleaned off. When I first turned on mine I had to uninstall a lot of junk apps that came pre-installed to allow apps I actually use to download. Anyone that has bought an Android device knows this isn’t a surprise.

The battery holds up pretty well between us casting, switching picture quality choices, and my son using it to watch Netflix when my husband is busy playing  The Legend of Zelda: Breath of the Wild. So far our usage gets it down to 30% or less during the day so we charge it each night.

What happens if you lose the remote, your child kills the battery watching The Croods on Netflix, or your dog eats it? Just download the VCast app to your iOS or Android device and you are back up and running. The app looks the same on my iPhone as it does on the Android remote.

Let’s talk picture quality, shall we?

You have a few options in terms of quality: Calibrated, Calibrated Dark, Vivid, Game, and Computer. Each one has its own set of settings that you can manipulate to your desire.

Calibrated and Calibrated Dark are the settings that offer the most “accurate” picture for Hollywood and TV production videos. More colorful content, like video games or animated series, you might find Vivid works better. Standard is your happy medium between them all.

This model comes with 32 Active LED Zones. In basic terms, this refers to how the TV is lit. Cheaper quality TVs use edge lighting which means the edge around your TV is where the lighting is and that can screw with the contrast of your picture.

32 Active LED Zones means you have 32 areas of the screen that can look at how dark something should be and adjust it without messing with the areas around it that need to be brighter thus giving you better contrast and better picture quality. The more zones you have, the better your contrast will be.

To test out the picture quality I went for a couple of favorites: Star Wars: A New Hope and The Legend of Zelda: Breath of the Wild.

Star Wars: A New Hope gave the Active LED Zones a solid test with the opening crawl on the dark space and starry night. When the scene shifts to the planets against the blackness of space and the ships start to come from the top right corner, it was a thing of beauty. We decided that for our tastes, the best setting for this was  “Calibrated” or “Vivid” settings with the LED zones set to “on.”

For The Legend of Zelda: Breath of the Wild my husband’s personal preference was “Vivid” with the game latency turned on. The vivid setting made the colors pop off the screen. Since I don’t play the game myself, my husband tested the gaming portion out and he tells me that there is no lag compared to our last TV.

Can you hear me now? What about the sound?

I wasn’t sure how the sound quality would be at first because as manufacturers make thinner units, things get sacrificed and speakers are generally the first on the chopping block in terms of quality. After playing with the settings at default I found the optimal sound settings were the ones recommended via a Google search. My worries about sound quality were put to bed when I put in Star Wars: A New Hope and the opening credits rolled. “Damn” is the best word to describe it.

I’ve used TVs with and without a sound bar and this one doesn’t need one out of necessity. If you would like to add a sound bar for surround sound, go for it, but as far as getting one to be happy with this unit, the built-in speakers are just fine.

No TV is perfect though.

While things might seem all sweet and rosy here, even with all these nice features and positive testing, I do have a few complaints.

Despite my few complaints, overall, the VIZIO M50-D1 is a great value if you’re in the market for a new 50″ class TV. It comes with quality picture and sound right out of the box and the Chromecast ability means one more port for you to plug-in something else. My son enjoys using the tablet remote to watch his Netflix shows while my husband and I enjoy streaming Pandora. If you’re looking for a new TV, we can call this one GeekMom approved.

The VIZIO M50-D1 is available at Best Buy and Walmart for $649.99 at the time this article was written.

Disclaimer: GeekMom was sent a review sample to use for this review. 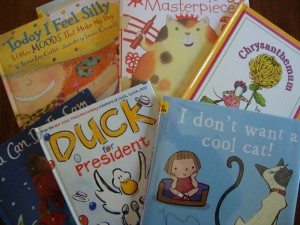 The Reason We Should Read Picture Books to Older Kids