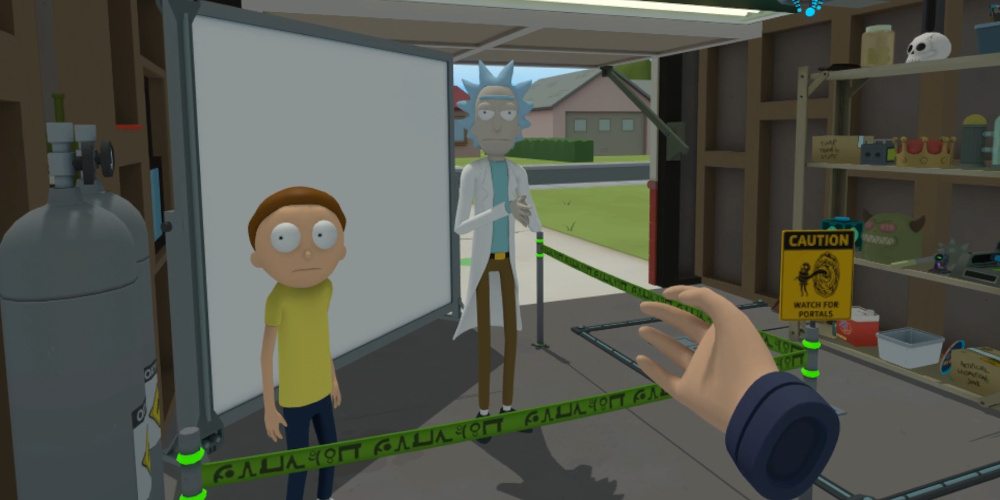 Rick and Morty: Virtual Rick-ality (which I will call Rick and Morty VR from here on out) came out Thursday last week – I’d been waiting impatiently for it since PAX West 2016. I’ve since played the game thoroughly, and every critique I’ve read is giving the game high praise. You don’t need me to write a review on this one, just go buy it.

I spent most of Thursday evening soaking in the Rick and Morty universe in VR. Just as I was wrapping up for the night, I noticed a tweet from CloudGate Studio president, Steve Bowler, saying he was about to stream the game and inviting members of Owlchemy Labs to join in. I jumped at the chance to see how the developers were doing at the end of what must have been an exhilarating day. It kept me up late, but am I ever glad I tuned in.  Joining Bowler in the stream via Skype were Cy Wise (“Owlmancer“, Studio Director, Science) and Andrew Eiche (Producer, Developer, and Alleged Certified Adult™).

Bowler, who is thanked in the credits, played with the loving, critical eye of a close family friend who was being re-introduced to a now-grown child. While he did so, Wise, Eiche, and a few other devs in the chat discussed the game and answered questions, giving a fun and interesting glimpse into the development of Rick and Morty VR.

Lots of interesting tidbits came out during the session. Some I can’t repeat; the 12 of us in the stream chat were sworn to secrecy. But there’s still a lot to talk about.

Surprisingly, hundreds of hours in VR, even in their own game, don’t make the members of Owlchemy Labs immune to the environment. It turns out that they still lean away from virtual smoke, holding their breath in the same way I do. And just because they’ve played the game doesn’t mean getting through all the puzzles is a breeze. Wise admitted during the stream that she had been stuck that day, unable to figure out the recipe to make a candy bar in the combinator.

When I shared that I found the mask-removal death of Mr. YouSeeks disturbing, particularly when I do it with my own hands, the team agreed. It turns out they had spent a long time trying to perfect the amount of revulsion that vignette should engender in players; I think they nailed it.

A Labor of Love

Art almost always requires many iterations of blood, sweat, and tears, and some of the tales shared showed that Rick and Morty VR is no exception. The team obsessed with refining mechanics and puzzles until they felt just right. Mr. YouSeeks is a perfect example: handing an object to YouSeeks proved particularly difficulty to get right; it required multiple attempts, with every member of the development team taking a crack at it at one time or another, before it was finally solved. (Astute players will note YouSeeks calls out a “got it” when receiving items to make sure the player knows the transfer is complete).

My favorite puzzle of the game, the engine repair kit, is also a great example of the team adapting to multiple play styles. Players like me can take their time, sorting pieces, examining the instructions, and counting and comparing colored rings to find the solution. But the puzzle is also structured such that, by following just the first instruction, it can be brute-forced in a reasonable number of attempts.

The game is littered with attention to detail. Owlchemy set a standard for worlds behaving as the player expects them to in Job Simulator that they’ve carried into Rick and Morty VR. The attacking bureaucrats in the Space Pirate Trainer-like mini-game can be shot in such a way that limbs are removed (the devs don’t think that had been done before). (Edit: Bowler has since noted it was at least done in The Brookhaven Experiment Demo.) There are a ridiculous number of outcomes from placing items in the combinator. Everything you want to interact with reacts as it should, or at least, responds with enough information to let you know that you’ve run up against the limits of the game’s universe in an amusing way.

The discussion of the bathroom was especially interesting. Once you have a bathroom scene, you need a mirror, and while the idea of a mirror may sound pretty simple to implement, they’re notoriously hard to do. There’s a reason why the mirrors are broken, shot, dirty, or otherwise missing in many games. What followed was a highly technical (but fascinating!) discussion of the numerous cameras, rendering spaces, and other challenges they faced in making that mirror work, but they got it done.

Of course, once you can see yourself in the mirror as clone Morty, and you spot that toothbrush on the counter (which has to be there; it’s a bathroom!) you’re going to want to brush your teeth. This was an entirely new problem, because detecting that the player is “brushing” is a very difficult task, but you have to know the player is actively brushing to play matching audio of brushing teeth, or the action won’t feel right.

Which is why that toothbrush is electric.

So the game works as an interactable world, but it’s also funny as hell.

While Roiland’s concepts and voice adorn the game, make no mistake: Owlchemy played a huge comedic role. In particular, the devs gushed about the impact of Carrie Witt (Señor Artist and Cat Whisperer). As described, once the game hit a sufficiently advanced state, she’s basically given the direction to make this game better with art and that’s exactly what she did. I’ve gotten especially large laughs out of the numerous book and magazine covers that are scattered throughout the game; fans of Rick and Morty should take the time to take it all in. Pay special attention to the issue of “Tech n’ Stuff” in Rick’s garage – many of the quotes on the back are real posts from the forums and reddit.

They also took opportunities to improvise. One part of the game I love are the hidden cassettes – hidden tapes each with a few minutes of audio that you can play, some from characters from Rick and Morty, others just humorous bits. One of the stories told during the stream was how the voice actor for the space car (Kari Wahlgren) recorded all the required dialog in far less than the planned time. Owlchemy gave her the opportunity to riff, resulting in a lot of additional dialog, and a mixed tape made by Rick’s car. It’s fantastic.

And perhaps my favorite part: in keeping with tradition from Job Simulator, Owlchemy has a spiritual successor to the exit burrito – a “tasty chunk” that the player can eat to exit the game. Whether or not it should be an actual burrito was the matter of heated debate, but I think the direction they took it was perfect. (And gross!)

There is Weird Stuff to Discover

Despite the team’s commitment to quality, there are always limits in any project where you have to say: “good enough”. My favorite example of this is the plumbus. Due to a quirk of the game’s physics engine (Unity), it’s possible to shake the plumbus into an unusual configuration where it… looks like it hurts. If a plumbus can feel.

There was discussion of implementing a model using inverse kinematics to more rigidly define plumbus behavior. Thankfully, it wasn’t implemented. So get in the game and abuse your plumbus.

The team also took the approach of “exploiting brains,” as Eiche put it, in the interest of making a better game. While I don’t want to reveal any specific examples, the general principle is that, due to VR’s immersiveness, the team could create rules of behavior, teach them to the player, and then violate those rules behind the scenes  to manipulate puzzle difficulty. Players never notice the change because they don’t push up against the boundaries any longer. Basically, Rick and Morty VR isn’t just a great game – it’s also an interesting application of operant conditioning.

One of the best parts of watching the devs chat was the obvious respect and friendship they have for each other. There was no bragging of their own achievements; everyone continually went out of their way to compliment each others’ work. Not to put too fine a point on it, but the real secret of success to this game may just be friendship.

If I’m right, it’s good news for us as lovers of VR. Owlchemy was already riding high with the success of Job Simulator. I’ve been watching their Twitter feed, and they’re doing some amazing technical wizardry with mixed reality footage. I can’t wait to see what magic they create next. 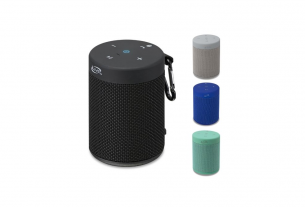 2 thoughts on “Behind the Scenes of ‘Rick and Morty: Virtual Rick-ality’”