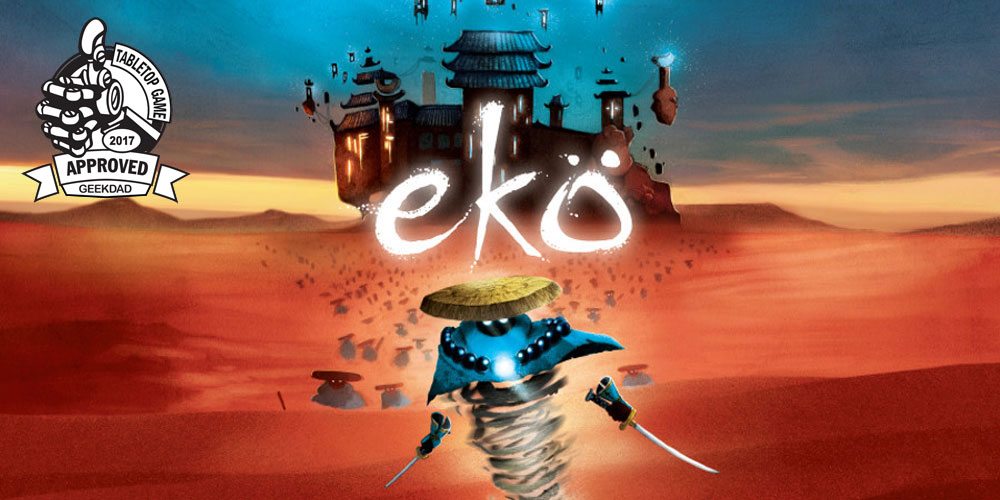 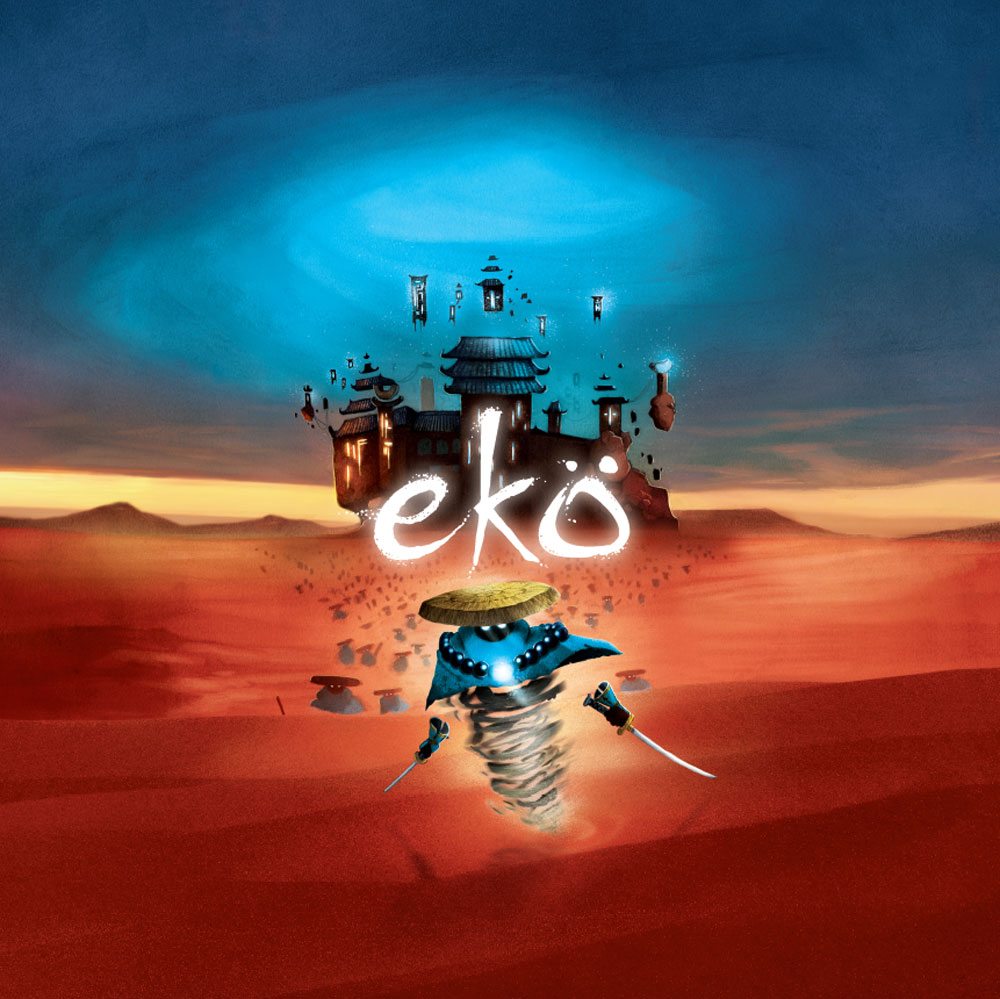 The powerful emperor Ekö had four children who governed his provinces, but after his death, his children turned on one another, each wanting to be the sole heir. The war ravaged the lands and devastated the people. In spirit form, Emperor Ekö cursed his four children, condemning them to an eternal war in these wastelands, where they animate rocks and sand and dust to form their armies.

At a glance: Ekö is an abstract strategy game by Henri Kermarrec for 2 to 4 players, ages 10 and up, and takes about 45 minutes to play. It was published by Sit Down! Games and will be hitting US distribution through Dude Games in the last week of March. It retails for $49.99 and is available online now, or ask for it at your local game store. Despite the aggressive-sounding backstory, the game itself is abstract strategy so it’s fine for kids; it does require chess-like planning for the strategy, so younger kids and inexperienced players may struggle to compete with more experienced players.

The components in this game, while fairly simple, are really beautiful and eye-catching. It’s one of the things that drew me to it when I visited the Dude Games booth at Gen Con 2016. The tiles cardboard, with a linen finish, and they depict a barren land with a few types of features, including capital cities, rocky mountains, rocky canyons, and rocky deserts. The large tiles are also color-coded and marked on the backs, making it easy to tell which ones to use for 2, 3, or 4 player games.

The player boards are cardstock: they’ve got spaces for your buildings, your reserve discs, captured emperors, and a few player aid reminders. Because of the large character portrait, they’re a little bigger than they need to be, but not terribly so. The artwork is by comic book illustrator Luky, and I really love the feel of it. There’s no text at all on the tiles or player boards, so everything is done with icons and images.

The discs are painted, engraved wooden discs—each one has the face of your army unit, except for one that has your emperor, which looks a bit like a kabuki mask. The buildings are painted wooden structures as well—the encampments look a little like Monopoly houses, though with a pagoda roof; the towers are sort of an Eye-of-Sauron forked tower, and the castle is a large pagoda.

The box itself is a bit large for the contents, and the game could have fit in a box perhaps half the size, particularly if the player boards were reduced, but it does make for a pretty box cover.

You can download a PDF of the rules here (in four different languages).

The goal of the game is to eliminate your opponents or have at least 12 points and control of a capital.

To set up the game, you’ll use a number of hexes based on the number of players, and then mix up all of the discs and place them face-up on all of the available spaces (not the various landmark features)—they will exactly fill up all of the spaces. The setup is a little tricky, since you can see the colors of the discs while you place them. We ended up using a cloth bag and drawing tiles out of the bag to place onto the board, just to make it a little more fair.

After all the discs are placed, each player in turn order may swap their Emperor with any of their own discs. Each player takes the corresponding player board and buildings, and puts all their buildings onto their spaces on the player board.

On your turn, you must move or construct, then you may do a forced march, and then you must reinforce if possible. The rulebook has a handy flowchart on one page to remind you of the turn structure as well as the end of game.

During the game, your discs can form stacks up to 4 high, though at the beginning all of your stacks are 1 high. Whenever you move, you can move an entire stack any number of spaces as long as they are open and connected with no other discs or landscape features blocking your way. You can move to an empty space, or move to regroup by stacking them onto another stack of yours, or move to attack by moving onto a space containing an opponent’s stack.

Generally you may only attack a stack that is strictly smaller than yours—you move into the space, and the discs you attacked are placed in the owner’s reserve on their board. However, your emperor is special—if it is in a stack, it’s always at the top, and the emperor’s stack can attack a stack of the same height. If you ever attack another player’s emperor, their emperor is put on your player board in the “jail” space and is worth 3 points. If that player ever captures an emperor, you do a hostage exchange and they get their emperor back.

There’s also a special kamikaze rule: a single disc may attack a 4-disc stack, but the single disc is also lost to the reserves.

To construct, you sacrifice a number of discs from a single stack that’s next to a building space, putting them in your reserve. It costs 1 to build an encampment, 2 to replace your encampment with a tower, and 3 to replace your tower with a castle. You must always build in that order, and there are also restrictions on what can be built where. For instance, the regs (stony deserts) can only support an encampment, and the mountains are the only place that can support a castle. You can also build over another player’s building—either the same size or one size up—but it costs you one extra disc over the usual cost.

Finally, you must reinforce: you add any number of discs (but at least one) from your reserve to one of your existing stacks on the board. If your emperor is in the reserve, you must use it during reinforcement. You may not reinforce any stack that is adjacent to an opponent’s building. If there are no possible stacks to reinforce, then you skip this phase.

Then, it’s the next player’s turn.

If you ever have 12 points and you occupy a capital, then you win the game immediately. Every time you build a building, it reveals some number of flower icons on your player board, which are points—1 for encampments, 2 for towers, and 3 for castles. Capturing an enemy emperor is worth 3 points. However, it’s important to note that when you upgrade from an encampment to a tower, the encampment goes back onto your board, so it’s only a net gain of 1 point.

You also win if you are the only player with discs left on the board.

Ekö is an abstract strategy game, so it’s probably going to appeal most to players who enjoy chess-like games. There aren’t miniatures or special powers, and there’s no hidden information. There is a bit of luck present in the starting setup, since the discs are mixed up and randomly placed on the tiles, and because the orientation of the tiles themselves is also randomized. However, once the pieces are on the board, it’s a game of perfect information and rewards those who can plan ahead and predict what their opponents may do.

As with many abstract strategy games, the theme isn’t totally necessary, though it does explain why the soldiers on the player boards look like rocks and wind, held together by magic. And it also serves as an explanation for what’s happening when you play multiple times—the battle never completely ends—though it makes for a pretty cynical story.

I like that the rules themselves are fairly simple: moving, regrouping, and attacking are all very easy to track. Building is slightly trickier, since you have to pay attention to which things can be built on which territories. In particular, I always think that I can build a castle on the capital, but that maxes out at a tower. I generally keep the flowchart page of the rule sheet on the table so that it’s an easy reference for turns.

The strategy can be pretty fascinating. Every time you lose a stack—whether from constructing, being attacked, or using a single disc as a kamikaze—you’re never getting that stack back. So you can increase the size of stacks, and decrease them if you use a portion of them for constructing, but once you’ve lost the entire stack, that’s it. New players will often sacrifice entire stacks to construct—but it may be better (if you have the time) to increase a stack beyond what you need, so that after constructing you still have some of that stack remaining.

So far it’s been rare that I’ve seen anyone win by reaching 12 points. It’s just hard to get that many buildings on the board without using up stacks and being eliminated, particularly if there are any players who are on the offensive. However, even if you’re not going for the 12-point victory, it may still be important to drop a few encampments here and there, because your buildings prevent other players from reinforcing there. That forces them to spend a turn moving away if they want to increase a stack.

Since you can move a stack any number of spaces, the board opens up more and more over the course of the game. At the beginning of the game, there are no open spaces at all. Eventually, though, you have to be very careful about making a 4-disc stack because if there are any single discs on the board, you need to know if there’s a possible path for it to reach you. Deciding when to use a forced march is also key. Sometimes you notice that if you attack a player, they’ve got another stack in reserve that can attack you back—but if you use a forced march, you might be able to get the jump on them. This is particularly true when there are emperors in matching stacks, because either one could attack the other. The forced march is a great way to end a stand-off.

I’ve played this both with adult gamers and with my kids, and I’ve really enjoyed it. When I taught my kids, they even continued playing after I had to go fix dinner, so that’s a good sign. However, because of the nature of the game, I have a pretty big advantage over both of them, and my 13-year-old has an advantage over my 10-year-old simply because she’s better at planning out potential moves in advance.

Overall, I’ve really enjoyed playing Ekö—it’s beautiful to look at and a simple set of rules leads to rich gameplay. I like that there are two ways to win, even though winning through buildings seems so much more difficult to me. If you’re a fan of abstract strategy games, this is definitely one to put on your list! 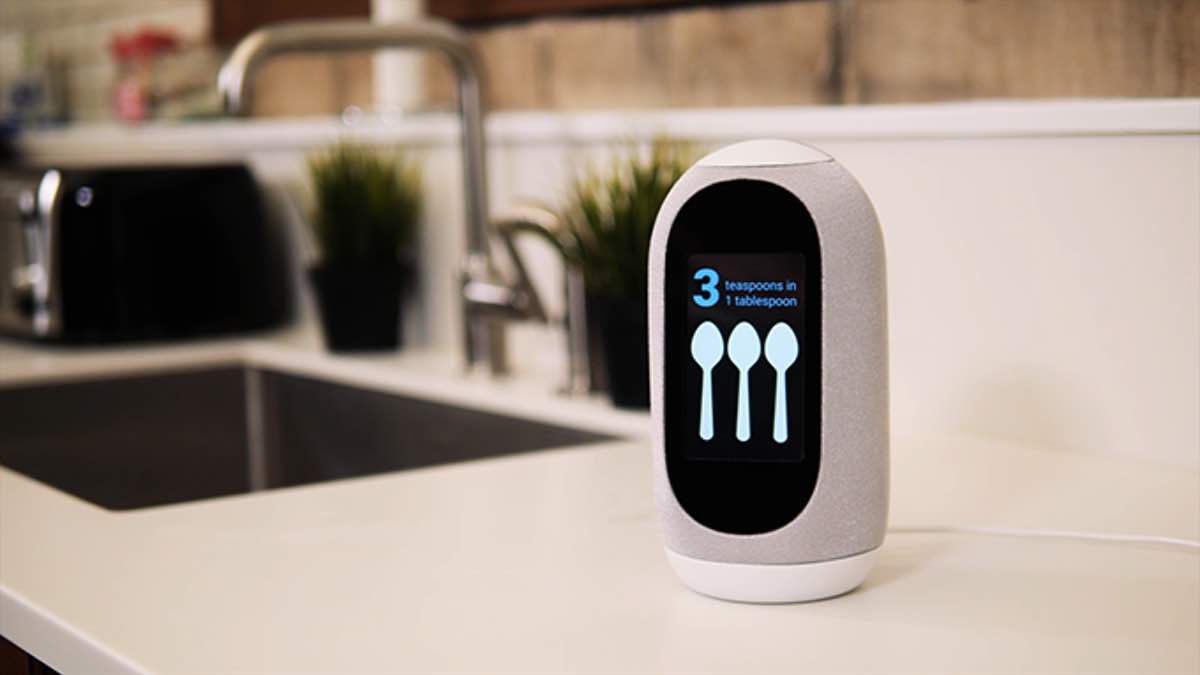 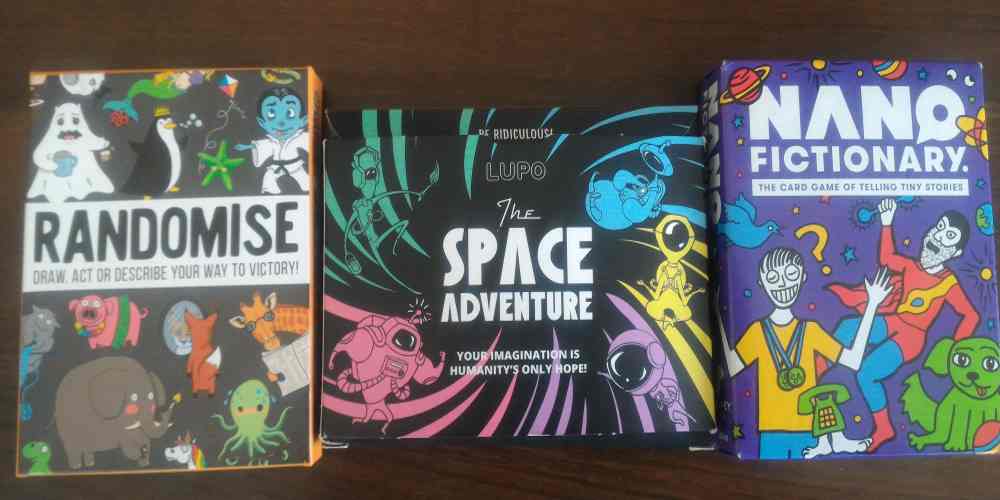