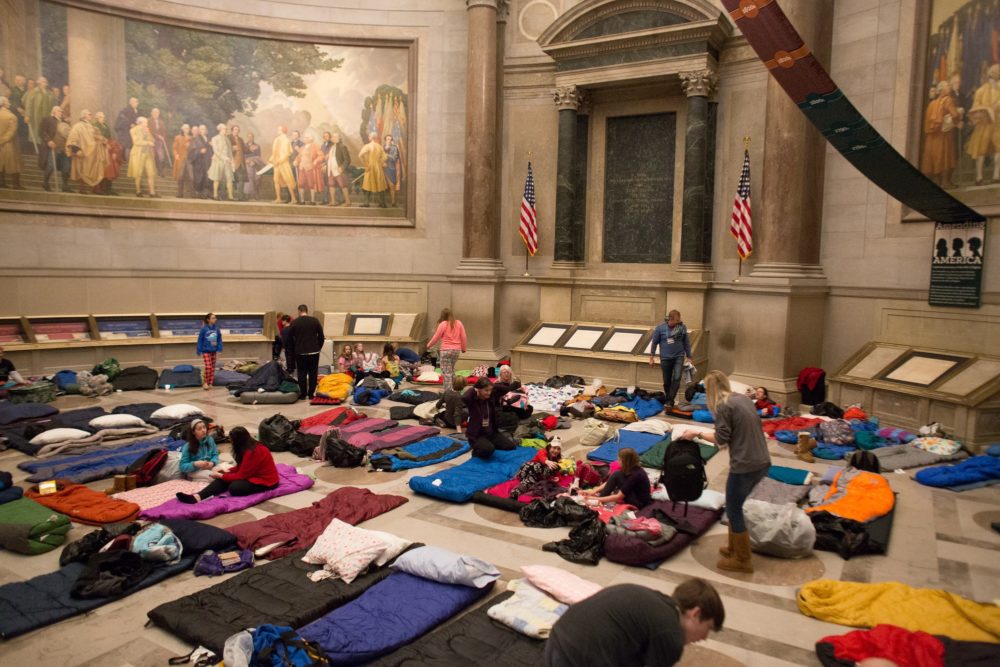 There’s certainly no shortage of amazing, unique opportunities in Washington, DC. Most visitors to the city hit a lot of the same standard hot spots: the White House, the Capitol Building, a Smithsonian museum or two, the Washington Monument, and so on.

But there’s so much more. And if you have the time – or if you’re a local looking for something truly special – you really should consider spending the night at the National Archives.

What’s that? Didn’t know you could stay at the Archives? Well, normally you can’t. But twice a year, the National Archives Foundation hosts a Sleepover at the National Archives. The next sleepover will be held on October 14, 2017, and you can reserve your spot(s) now. If you’re interested, I highly recommend reserving your spot as early as possible. These events DO sell out.

The cost is $125 per attendee ($100 if you’re a Foundation member) and is recommended for kids 8-12 years old. I should also note that you need to have a kid. This is a kid-focused event, so all adults must be accompanied by a child.

I had the opportunity to attend the February sleepover (“History, Heroes, & Treasures”), which focused on the Bill of Rights (which just celebrated its 225th anniversary) and superheroes. How’s that for a combination?

We’ve done a lot of cool stuff in the DC region, but this might just be one of the coolest. It’s not every day that you get unfettered, after-hours access to the National Archives and Charters of Freedom and then get to snuggle up within feet of our country’s most important documents.

So what’s involved? I’m so glad you asked.

The evening begins at 6:30 on Saturday, which is the earliest you’re allowed into the building to start checking in. There’s a full, standard security check at the entrance, so be prepared for that, especially if you brought a large, irregular flashlight or something. Everything, including pillows and sleeping bags, gets passed through the machine.

Things really kick off with an orientation in the McGowan Theater. This is where we get our bearings, get a sense for what’s in store, and meet David Ferriero: the Archivist of the United States (AOTUS). 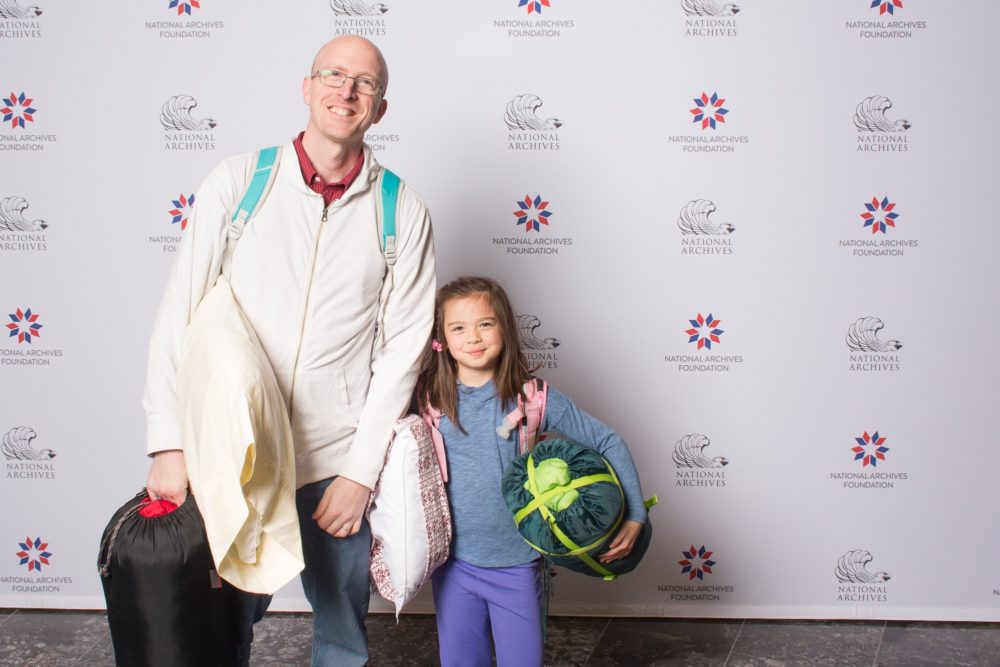 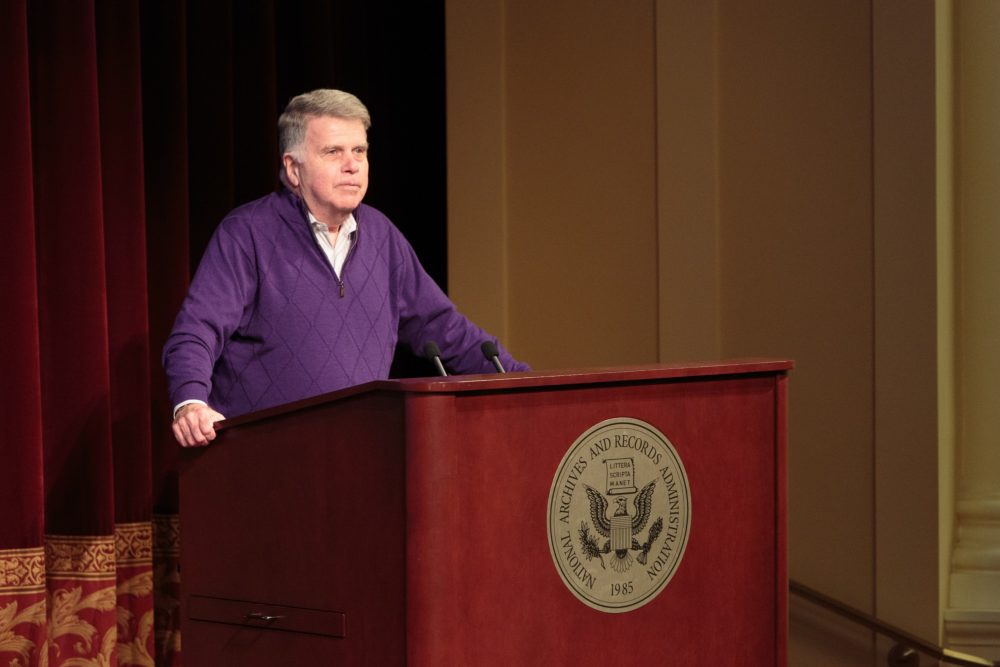 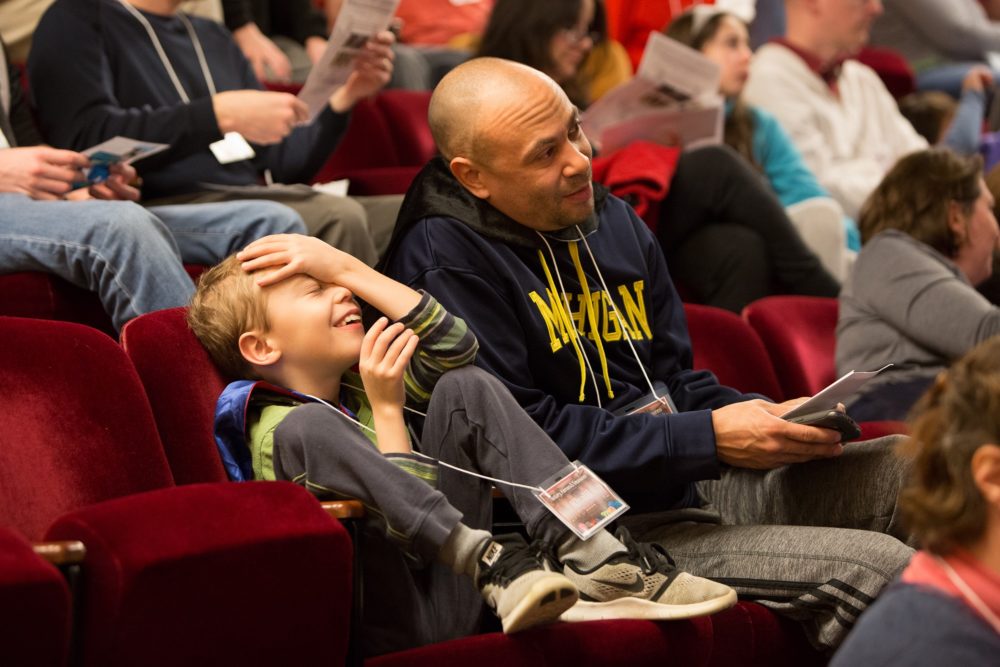 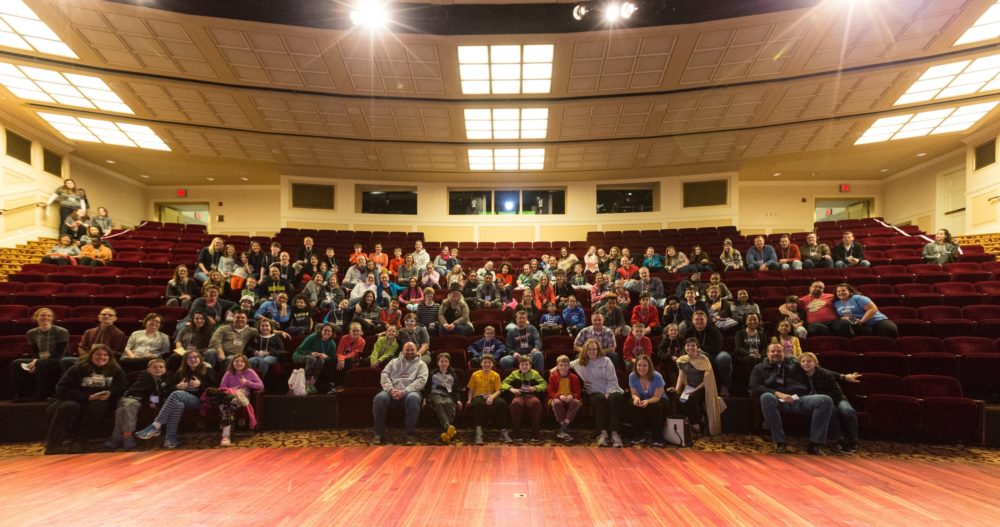 Most of the evening is given over to various activity stations around the National Archives. You essentially have the run of the place. The permanent exhibitions in the public vaults, the learning center, and the rotunda are all open. Activity stations are set up throughout, so kids can take part in a bunch of different activities during the evening.

They can do a scavenger hunt through the public vaults, write a letter to the president, learn about the Bill of Rights, write their own amendment to the Constitution, learn more about the National Archives and the documents it protects, play games, design their own superhero, and much more. 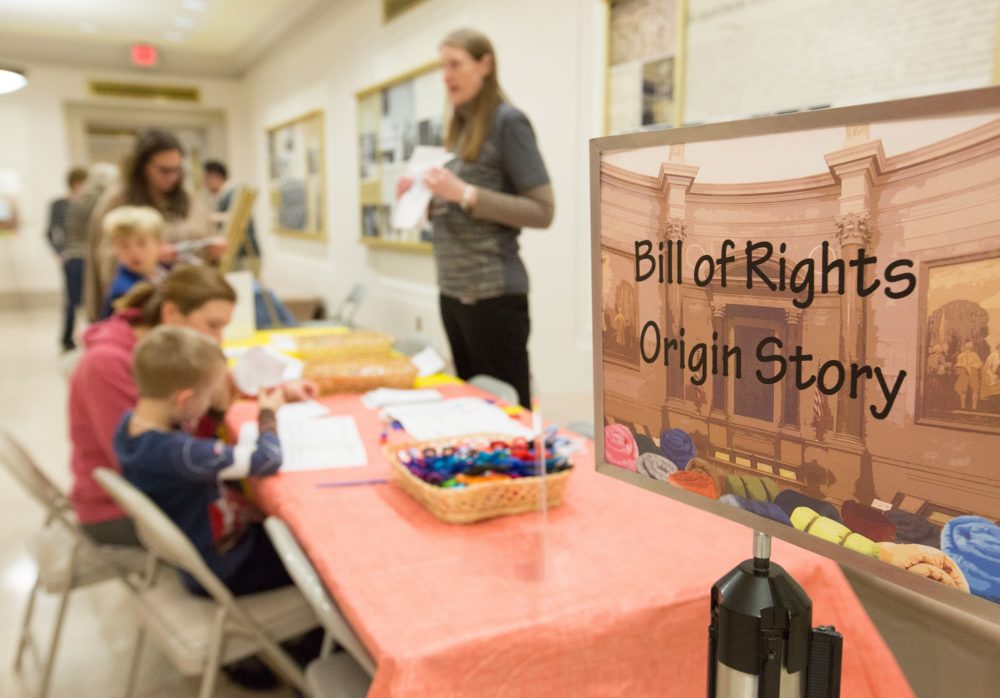 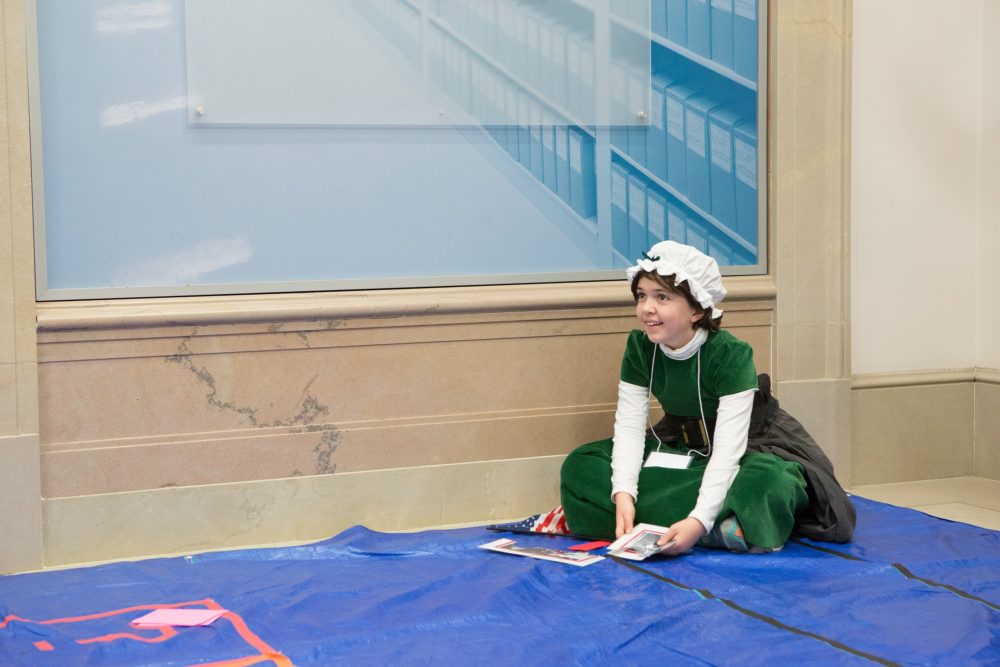 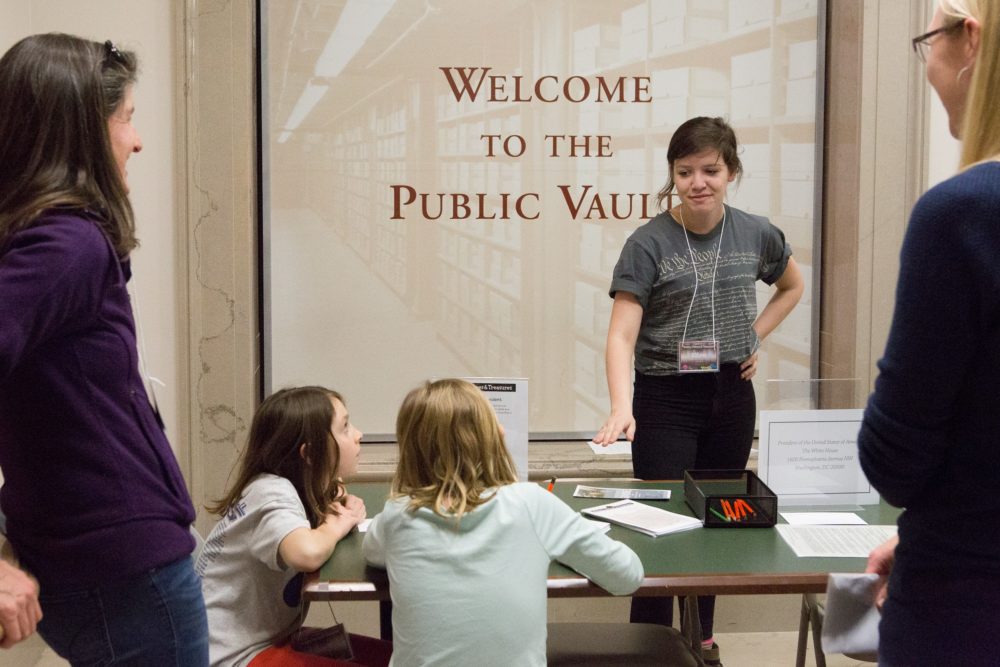 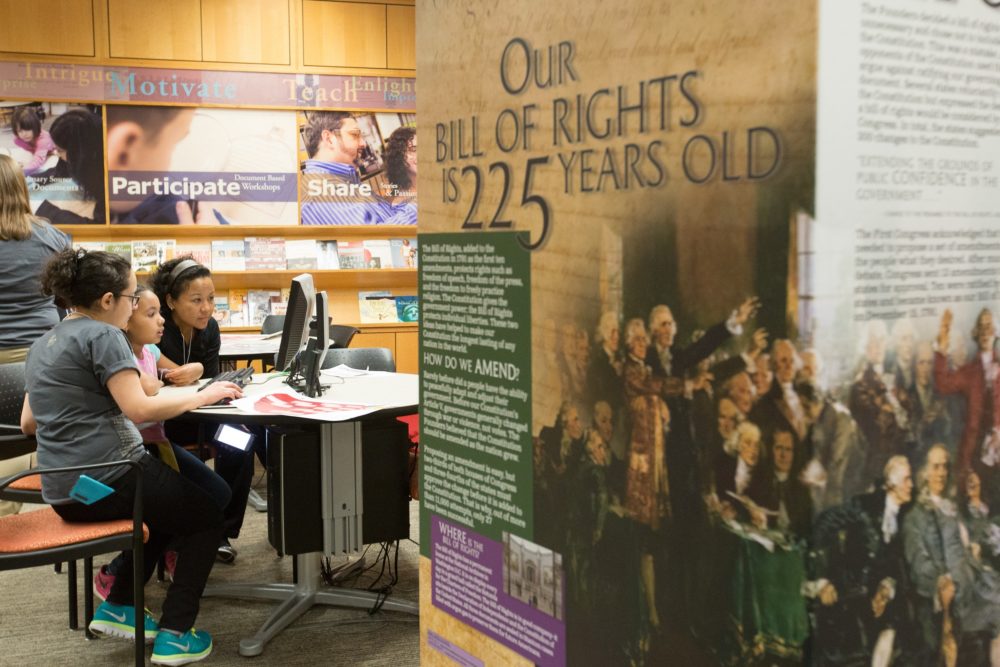 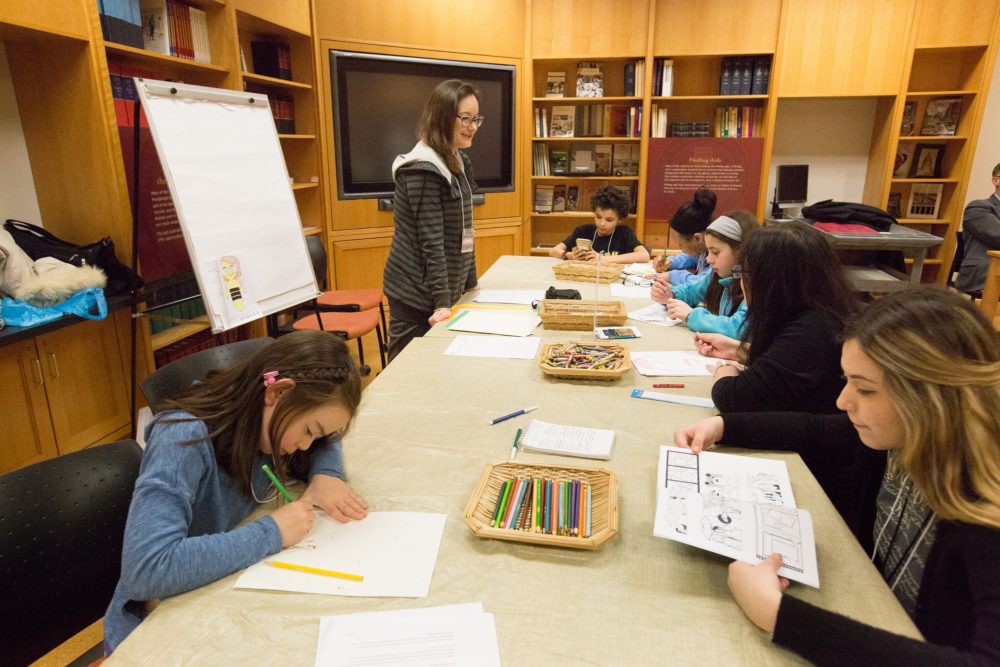 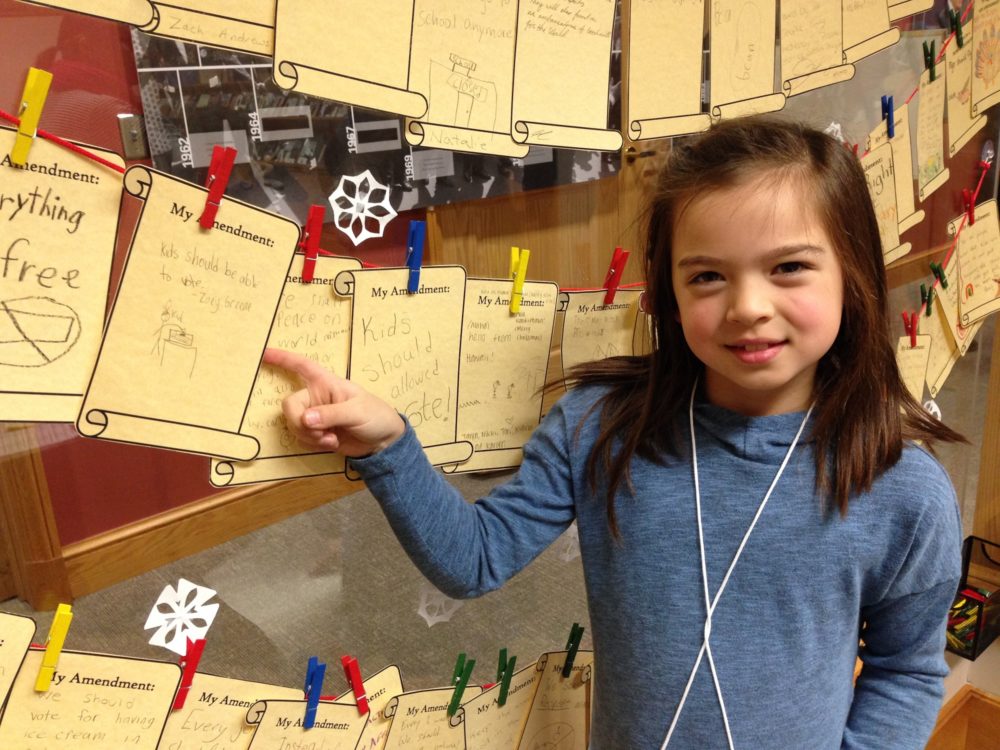 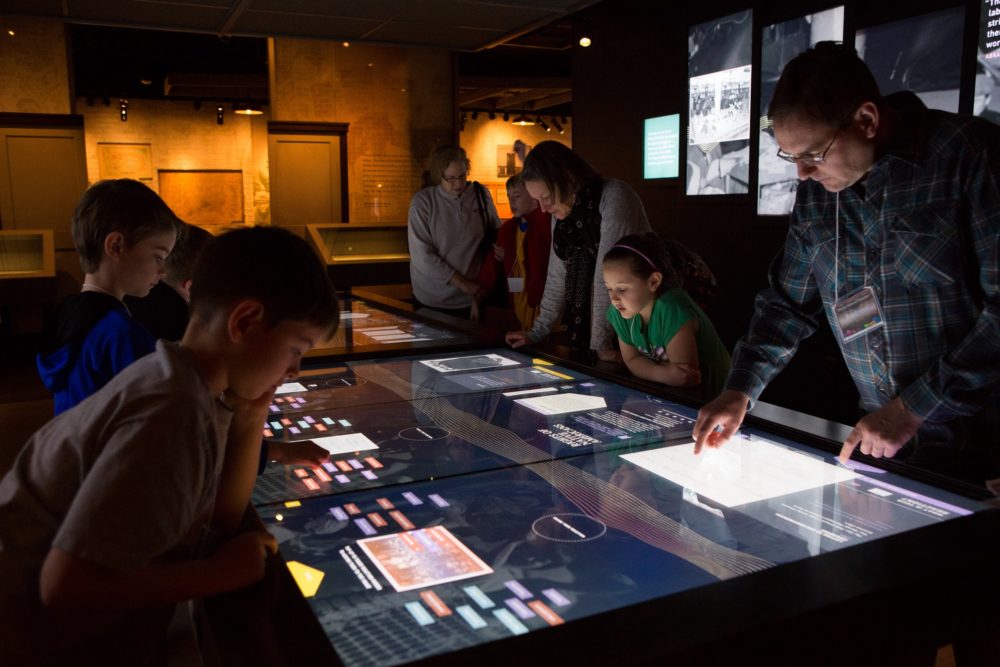 Or, you can just admire the Charters of Freedom.

With so few people in the building, you can really take your time with the documents. If you’ve ever visited the National Archives, you know that there’s usually a long line to see the Declaration of Independence, Constitution, and Bill of Rights. And you can’t really stop and take a long look at them. The line is constantly in motion, and you basically just shuffle along for a relatively quick glimpse.

Well, stop by the rotunda during the sleepover, and you can spend as much time as you want. My daughter was thrilled to just stare at and read the Constitution, and it made her day to find Alexander Hamilton’s signature.

Also? If you’ve visited the National Archives, then you know there are absolutely no pictures allowed in the rotunda. Well… 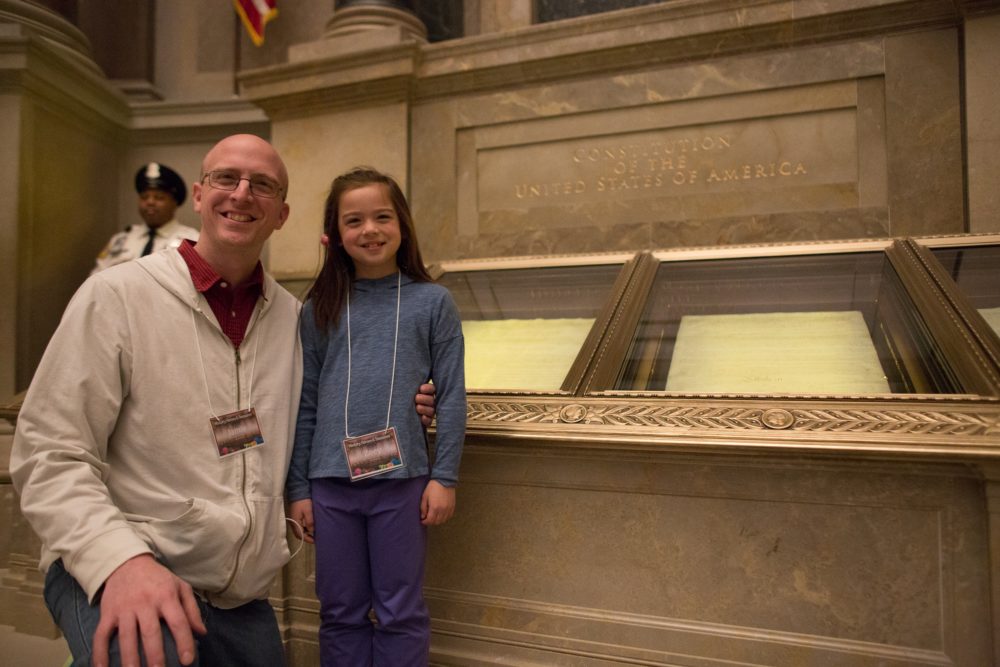 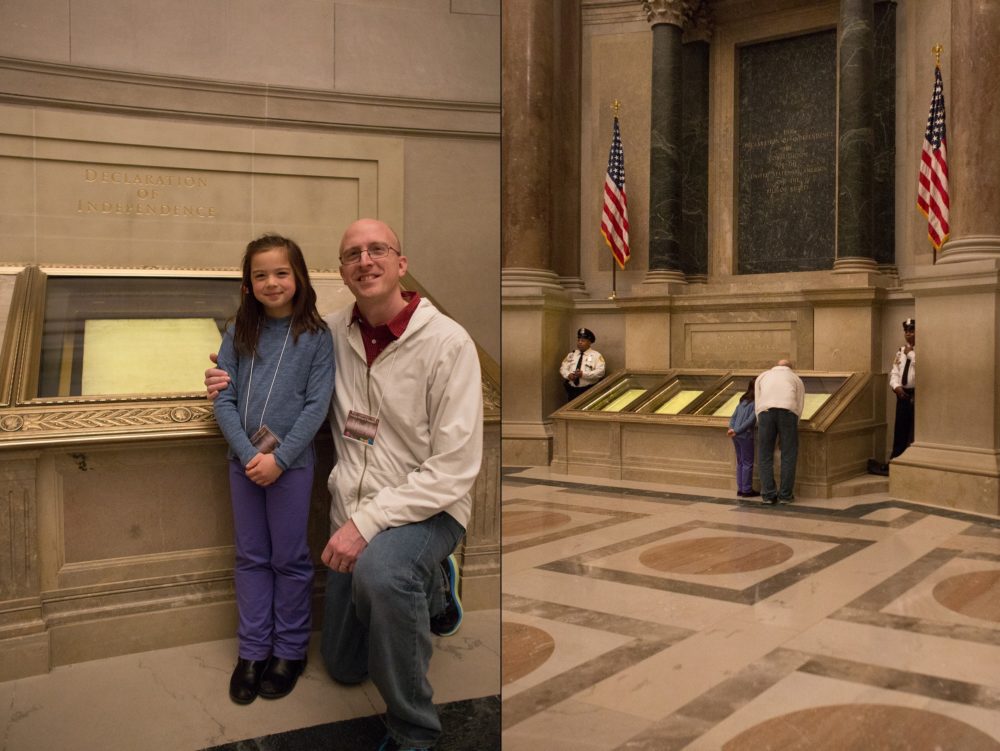 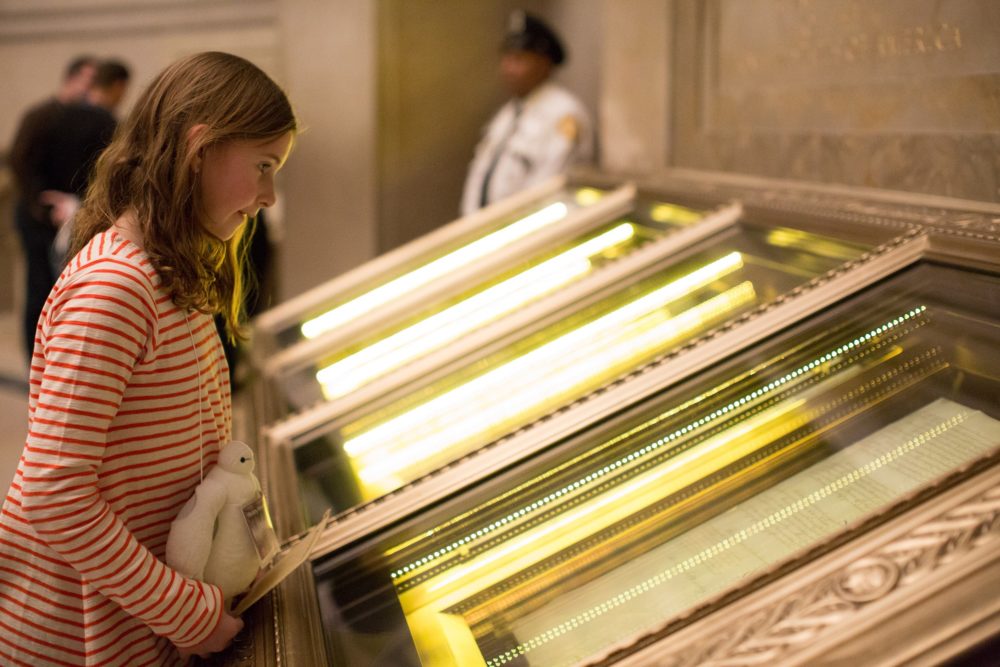 The capstone event of the evening was a presentation by Kathleen Krull, author of 60-some books, including her latest, A Kids’ Guide to America’s Bill of Rights, a copy of which was given to every kid at the sleepover. She spoke about her career, how she became a writer, and some of her many books. Based on the neverending stream of questions the kids had, she was speaking to a prime audience that was hanging on her every word.

As a parent, it was a thrill to see so many kids genuinely interested in and fascinated by history. 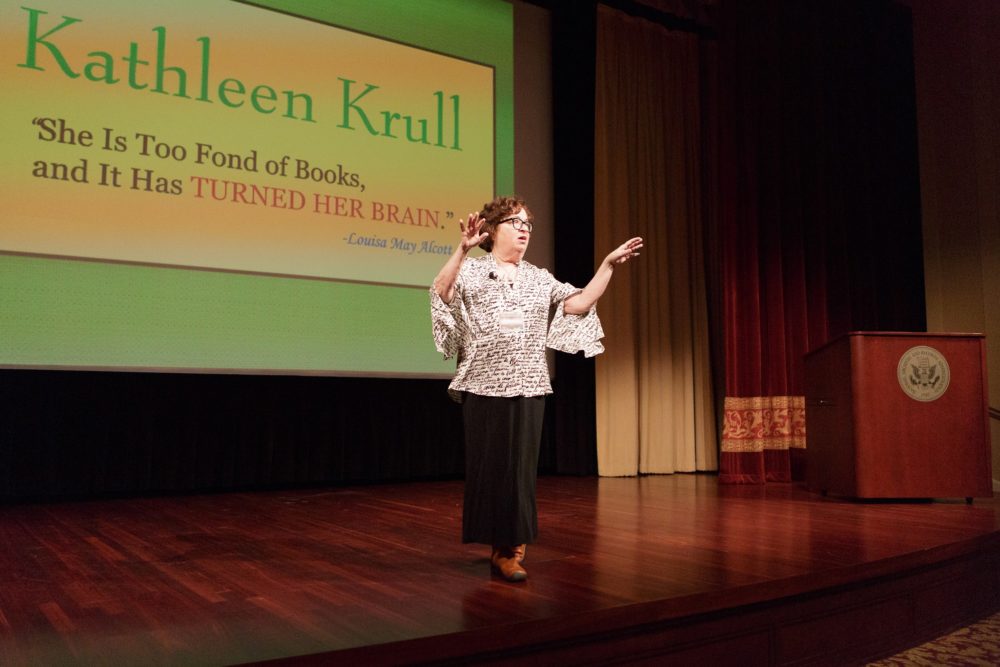 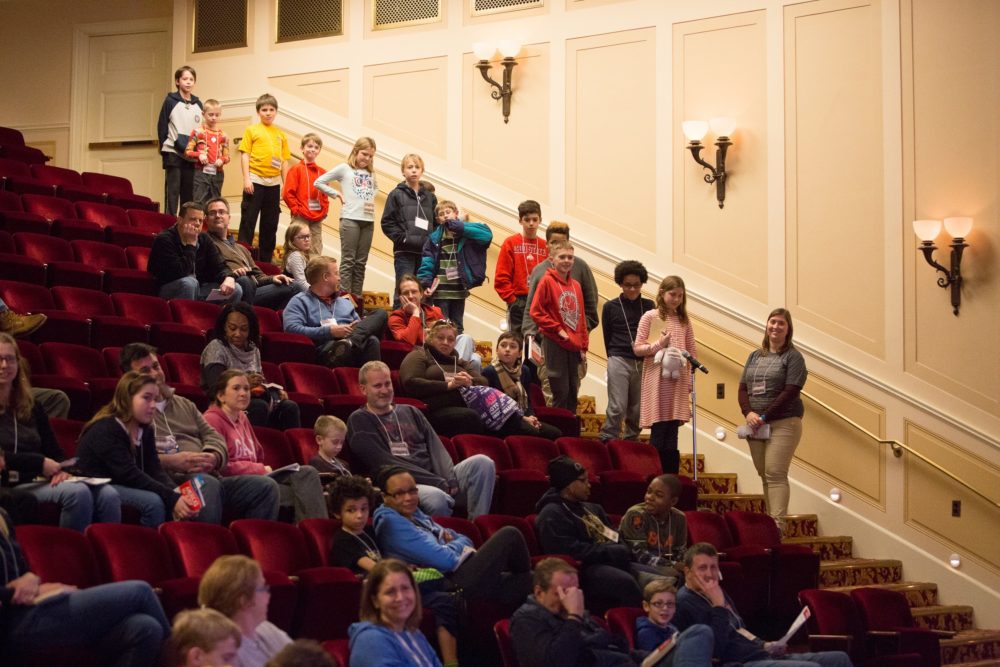 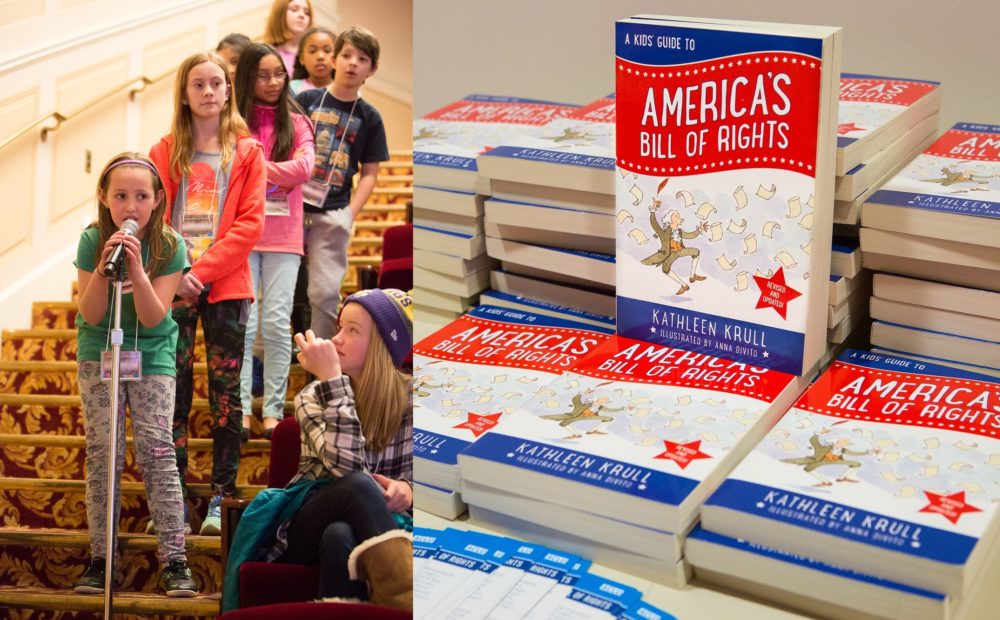 Finally, the evening concluded with storytime and movies (“The Birth of the Constitution” episode of This is America, Charlie Brown). And then! Then is the moment everyone was waiting for. It’s possibly the only time you’ll get a few dozen kids together who are all positively excited about going to bed.

Retrieve your stuff (which was stashed for safekeeping right after check-in) and go stake out a spot in the rotunda. Not everyone will be able to sleep beside one of the documents, obviously, but just camping out in one of the most beautiful spaces in Washington, DC, is a thrilling, once-in-a-lifetime experience.

But the real question is how much sleep you’ll get. The FAQ and material the Archives sends in advance advises attendees to bring layers of clothing and a sleeping mat for beneath your sleeping bag. There’s just no getting around the fact that you’re sleeping on a cold, marble floor. The rotunda is also kept on the chilly side (because of the documents).

I can say that a sleeping mat is a must. However, by the time the lights went out (at 11pm), it was actually fairly hot in the rotunda. That’ll happen with about 150 excited people all cozying up and sharing the same space.

I should say that my daughter slept like a baby. I, however, did not. It wasn’t because of the hard floor, which really wasn’t that uncomfortable (especially if you’ve ever been camping outside). It was the snoring. Let’s be honest. When you’re sleeping in close proximity to so many strangers, some of them are bound to be snorers. And I’m a light sleeper.

That’s clearly not something I can hold against the event, but if you’re like me, I wholeheartedly recommend bringing earplugs. 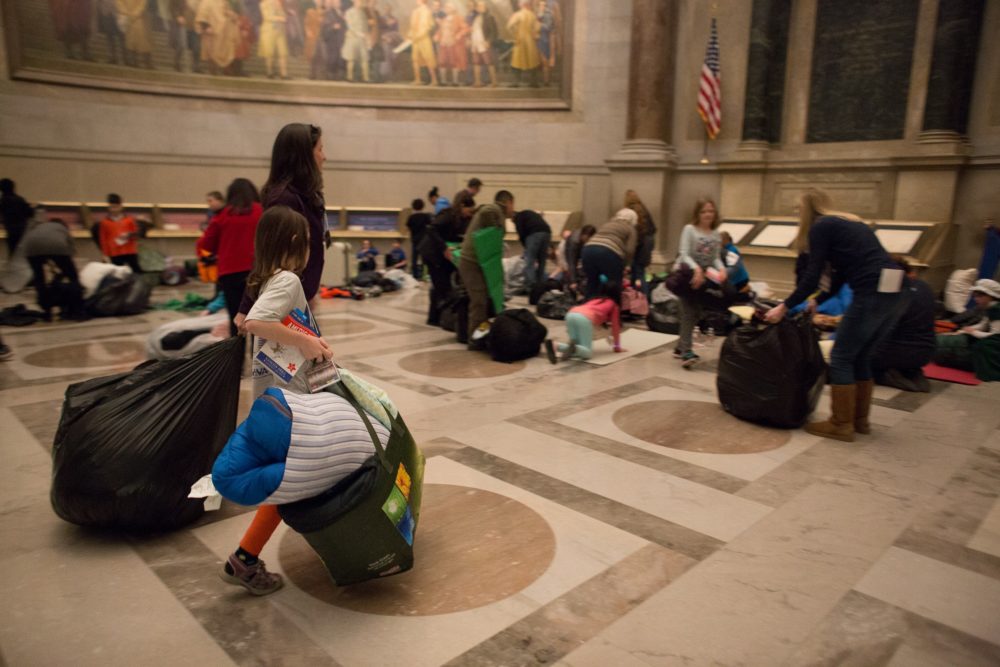 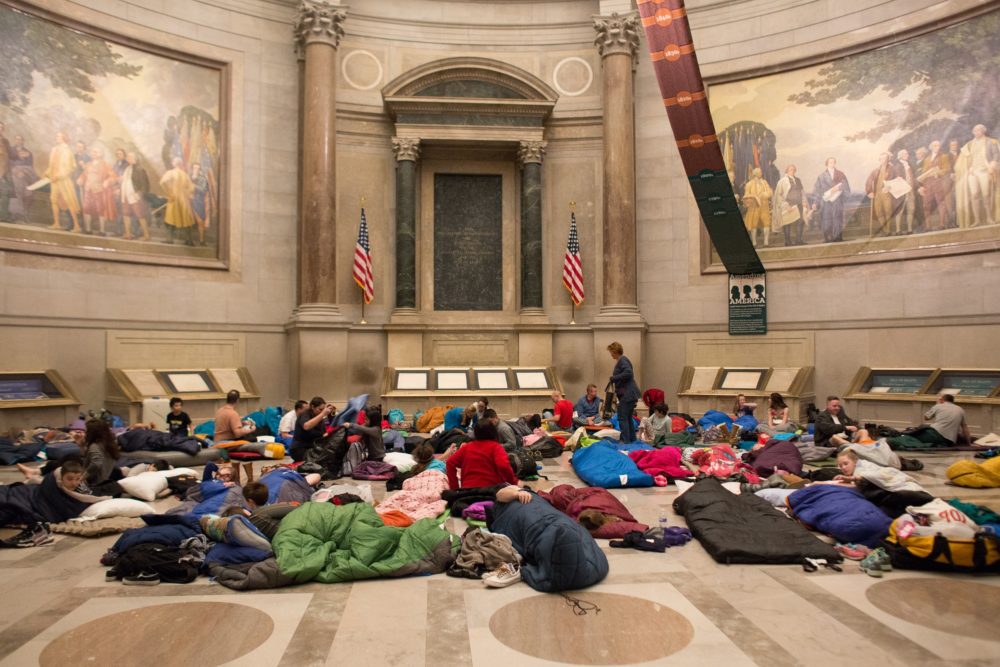 At 7am, bright and early, we were awoken by Woody Guthrie singing “This Land Is Your Land.” How fitting.

Breakfast is included, which includes freshly made pancakes flipped by the Archivist of the United States himself! So while some kids might be able to say that they slept over at a friend’s house and had pancakes for breakfast, not many can claim to have slept with the Charters of Freedom and had pancakes made by AOTUS!

Those are some bragging rights, right there.

After a wrap-up event in the theater and some free time to explore the Record of Rights exhibit (and the Magna Carta) and gift shop, it’s time to say goodbye. And by 9am, it’s done. We were on the Metro home.

Seriously, guys, this is an incredible experience that I can’t recommend enough. Check your calendar for October 14, 2017. Make your plan, and don’t delay. Reserve your spot now! 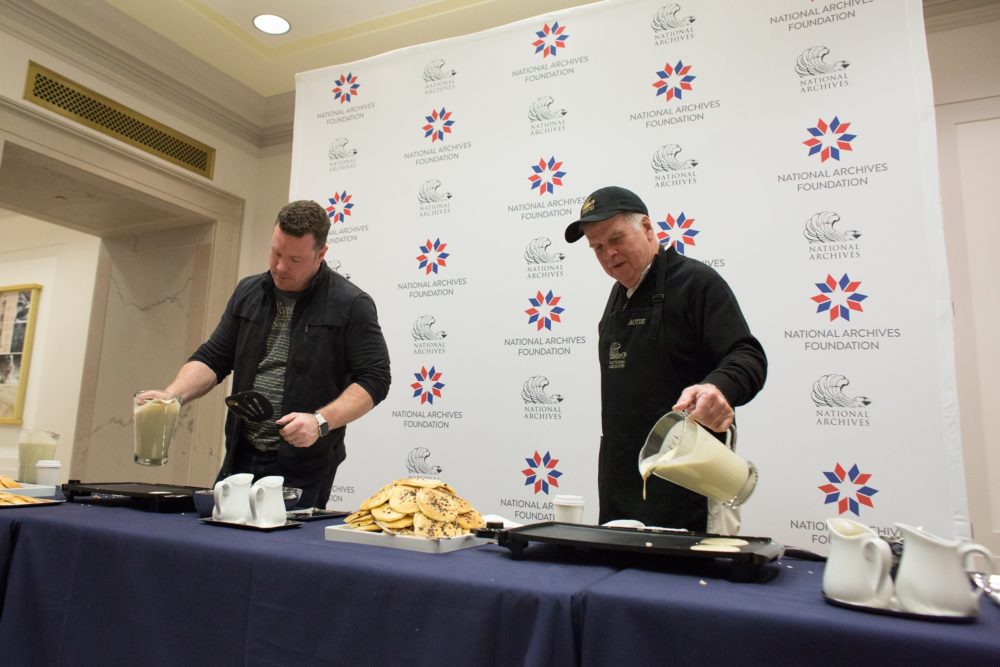 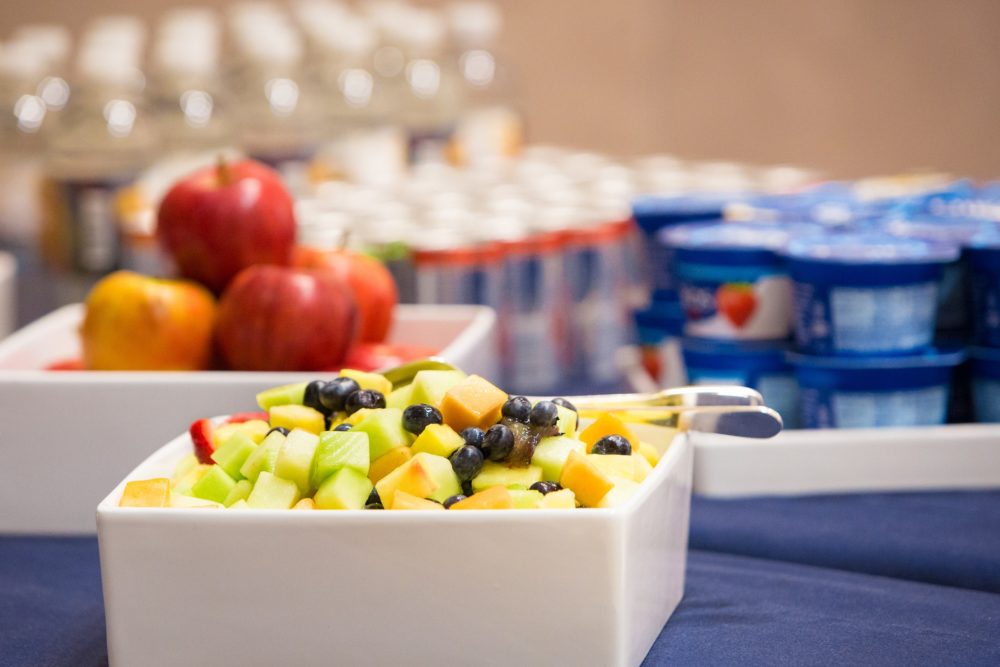 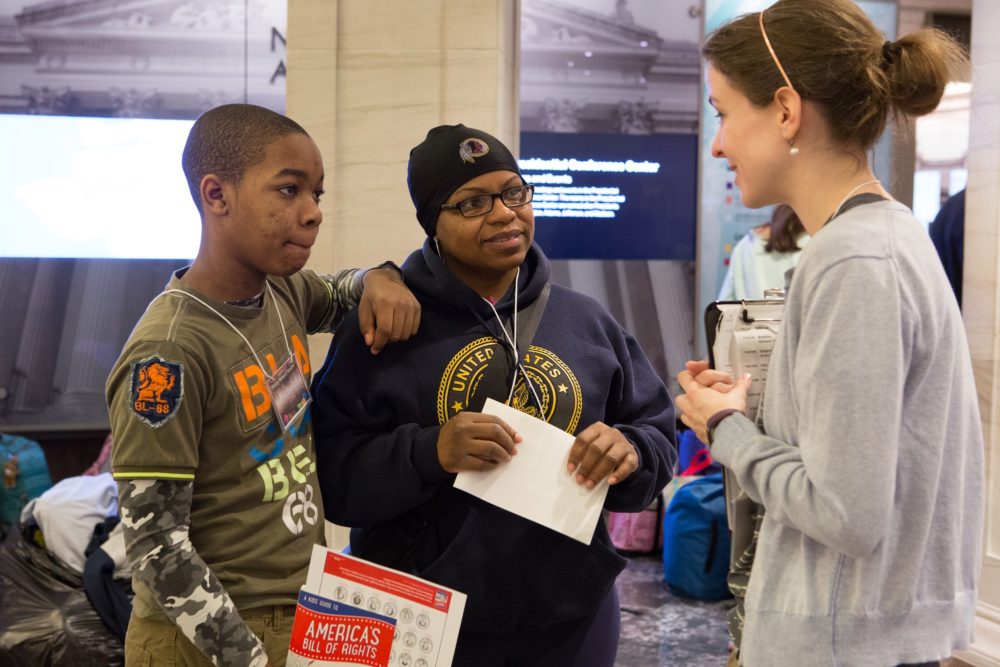 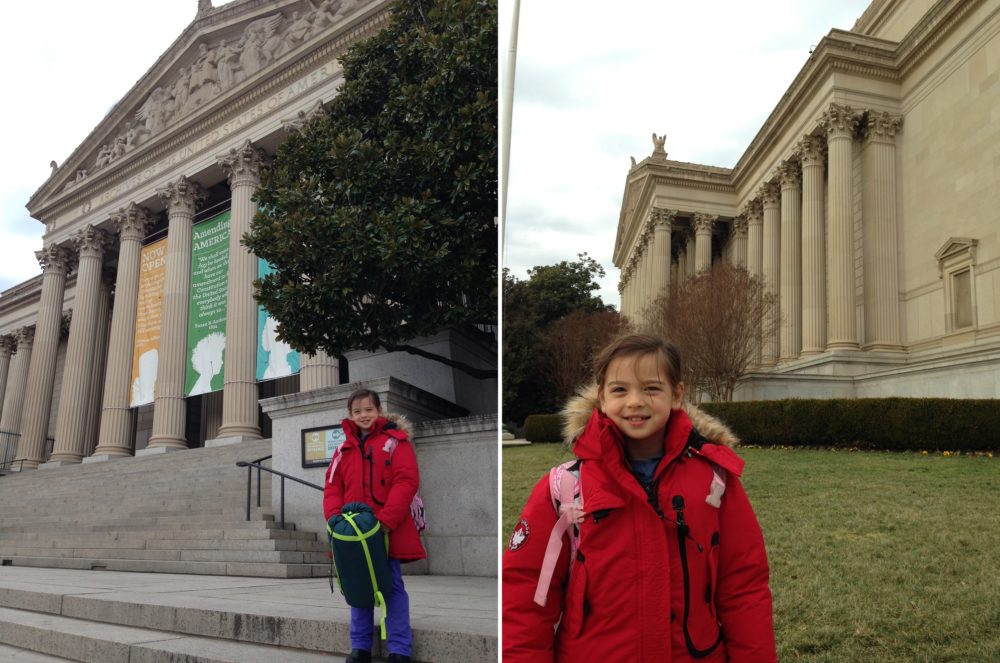 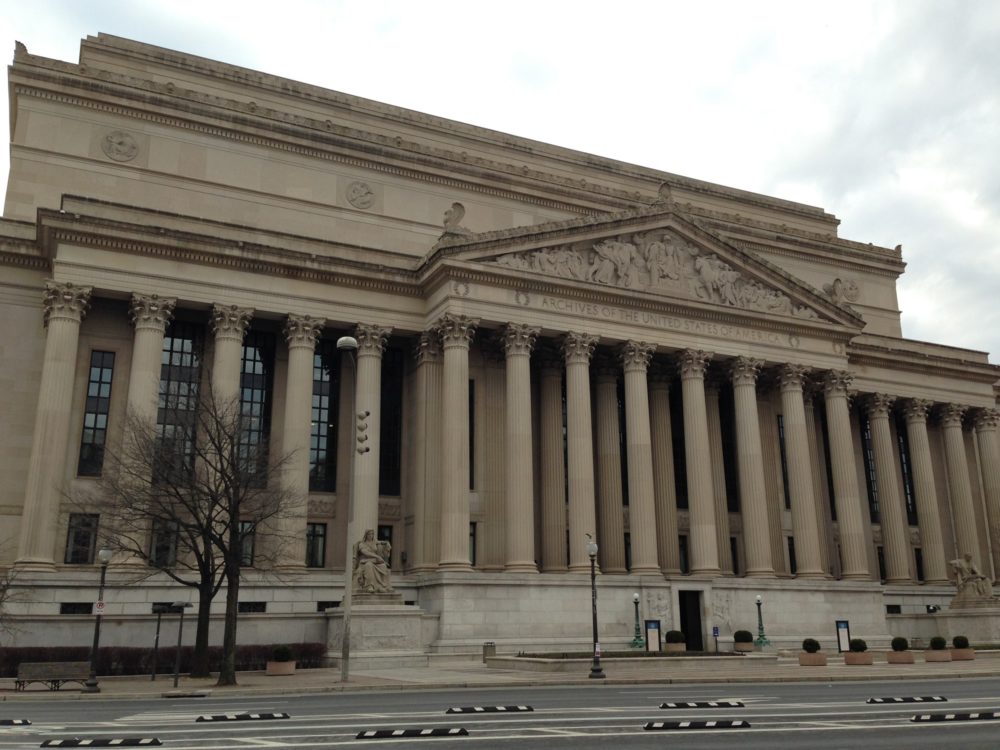 1 thought on “You Too Can Sleep With the Constitution – Literally”