This week, the DC Comics shows on The CW put the title heroes on the back burner and let the supporting cast–and even the villains!–play the starring role on their respective shows. Lisa H, Joey, and Corrina broke down the episodes on the GeekDad Facebook page this week. Below are some of the highlights of their discussions. 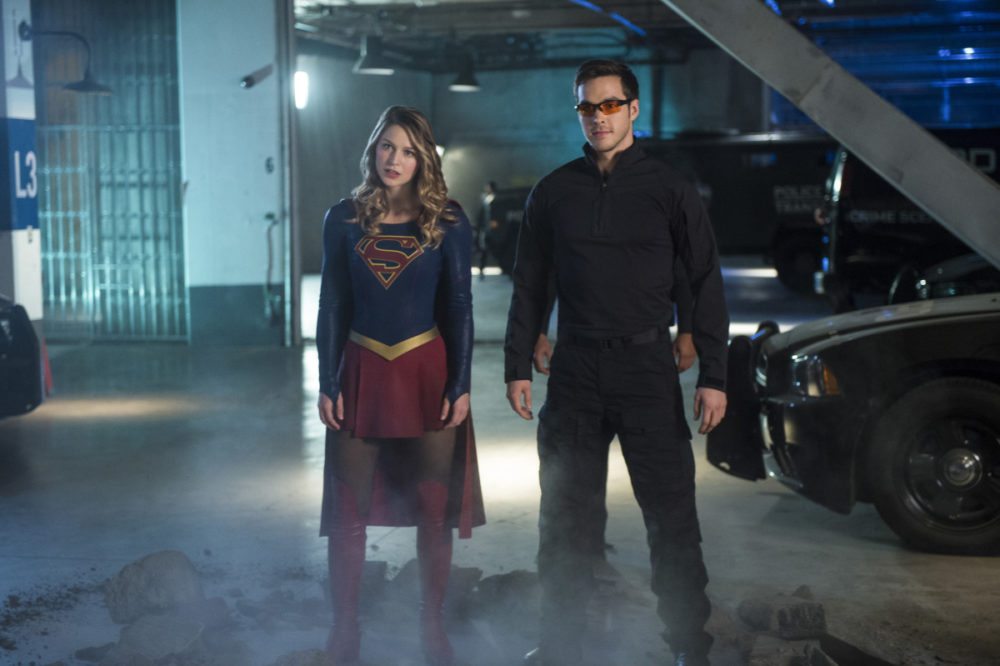 Supergirl, Episode 2.10, “We Can Be Heroes”
Joey: If M’gann could bust her cell, why hasn’t M’gann busted her cell before now?

Lisa H: This is an excellent question. I’m going with she feels so guilty that she chose to stay in that cell.

Joey: It appears that’s the case.

Joey: I can’t look at Livewire without thinking of the albino on “The Princess Bride”.

Lisa H: And I can’t look at Livewire without thinking “Lord what overacting!”

Lisa H: Guys…there is some epically bad writing in this episode.

“Here is my internal monologue, made external.”

“And here is my cliched response.”

Joey: Mon-El: “Yes, I kissed you.” Not “sorry I lied to you”. Not “I never should have done that.” Are we supposed to be okay with that non-apology?

Lisa H: It felt Rapey adjacent to me.

Bottom Line: This was far and away the worst episode of the four series this week, which is an unusual spot for Supergirl to fall into. Outside of a few sequences–such as the Danger Room training at the top of the show–this was a snoozer of an episode. Now that Jimmy… err… James’ not-so-super hero identity is out of the bag, maybe he can develop beyond his current role of insecure male who is fighting with SpaceBro for Kara’s attention and he can actually be the supporting (as in offering guidance and encouragement) character he should be. 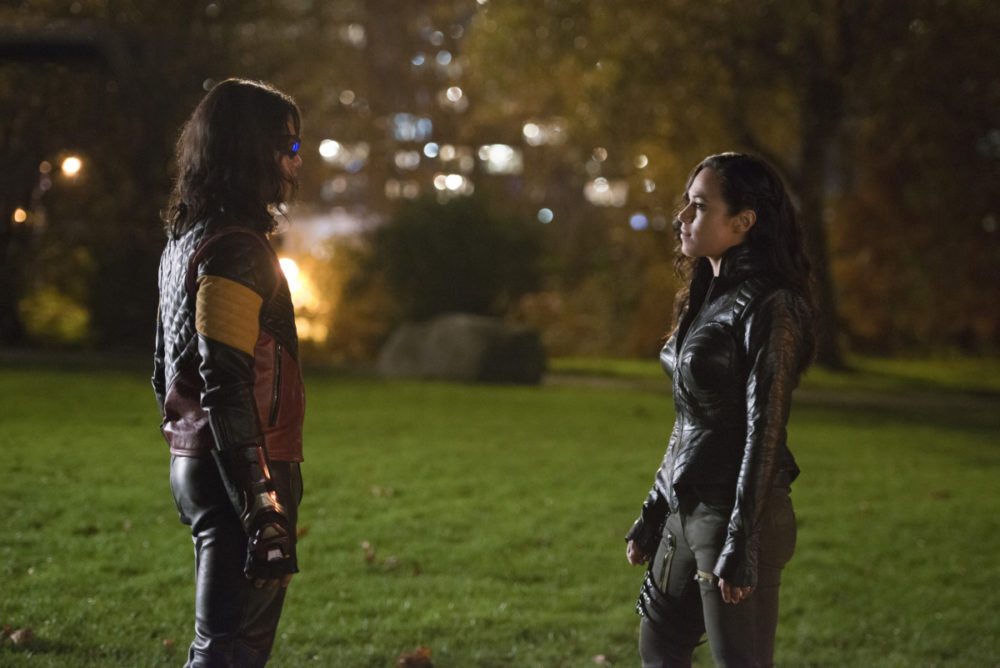 The Flash, Episode 3.11, “Dead or Alive”
Corrina: I kinda like anyone who yells at Barry, including Malfoy.

Lisa H: Do we think Barry is a Gryffindor or Hufflepuff? Clearly Cisco and Caitlin are Ravenclaw.

Corrina: Barry is a Gryffindor without a plan. As are all of the Wests. They need their Slytherin, H.R./Harry.

Joey: Draco is killing it this episode. Loving his dry, deadpan style.

Corrina: Joe doesn’t respect journalism. Iris! Go all Lois Lane on him! (But, of course, the show believes in his POV.)

Lisa H: Or Joe’s just an overprotective daddy? Also…I’m on team Joe here. Iris was reckless and dragged Wally into it.

Joey: I’m surprised that the writers remembered that Iris still has a job.

Lisa H: Am I the only one who wants Gypsy to take HR back so we can get a new Wells?

Corrina: Interesting power set for this version of Gypsy. And, yes, I did buy the Justice League Detroit issues that first introduced her way back when.

Lisa H: Was she always able to open portals? I’m not familiar with her.

Corrina: She was a parody: a gypsy thief. Complete with Gypsy “costume.” But she was smart and put one over on most of the League. Ah, Gypsy and Vibe. No one would remember them save for the Berlanti-verse, which has given them an upgrade.

Corrina: Barry is super-fast except when a battle to the death challenge is put forth.

Joey: Why didn’t he phase through the handcuffs?

Lisa H: You’re looking for continuity. We have no time for that.

Lisa H: So..Let me get this straight. Cisco is facing a battle to the death but Barry’s focused on his problem?

Corrina: Barry is worried for Iris. No one is more important than Iris. Remember, Barry once got Earth-2 Joe killed after seizing the chance for a date with Iris.

Joey: Yeah. Good friend. At least they have Draco to actually care about Cisco and helping him defeat Gypsy.

Joey: Okay, wild theory taking shape. Wally saves Iris. They change the future. Back in the time vault, the newspaper byline again reads Iris West-Allen, but the date of the red sky event is changed to next season’s November/December four-part crossover. The first half of next season is 1) preparing for the Barry & Iris wedding, 2) teasing the crisis across all three Earth-1 shows (because Supergirl seems to exist in its own bubble), and 3) the Black Racer/Zoom coming after Barry and Wally like he is going after Eobard right now on Legends, due to their screwing with time. Again. Crossover is the crisis. Barry disappears. Second half of the season is Team Flash first holding out hope for Barry’s return, then starting to move on with Wally as the Central City hero. They go all-in and keep Grant Gustin offscreen as much as the story allows, but at some point they start foreshadowing his return at season’s end. It wasn’t the crisis that got him, he explains, he was leading Black Racer/Zoom away from Wally. The two Flashes team up to defeat him, boom, renewed for season 5. Yes? No?

Lisa H: Hmmm. I need to sleep on this.

Bottom Line: By the nature of how this episode was structured, it’s a good thing that this was a Cisco-centric episode, because the ongoing story points with Barry trying to save Iris, no one telling Joe, and Iris’ sense of invincibility–at least until May–dragged this episode (this season?) down to Supergirl‘s level this week. That said, the Cisco and Gypsy stuff was excellent and goes to show how much richer these series are because of their supporting casts. More Francisco! Less Barry’s personal dramas. 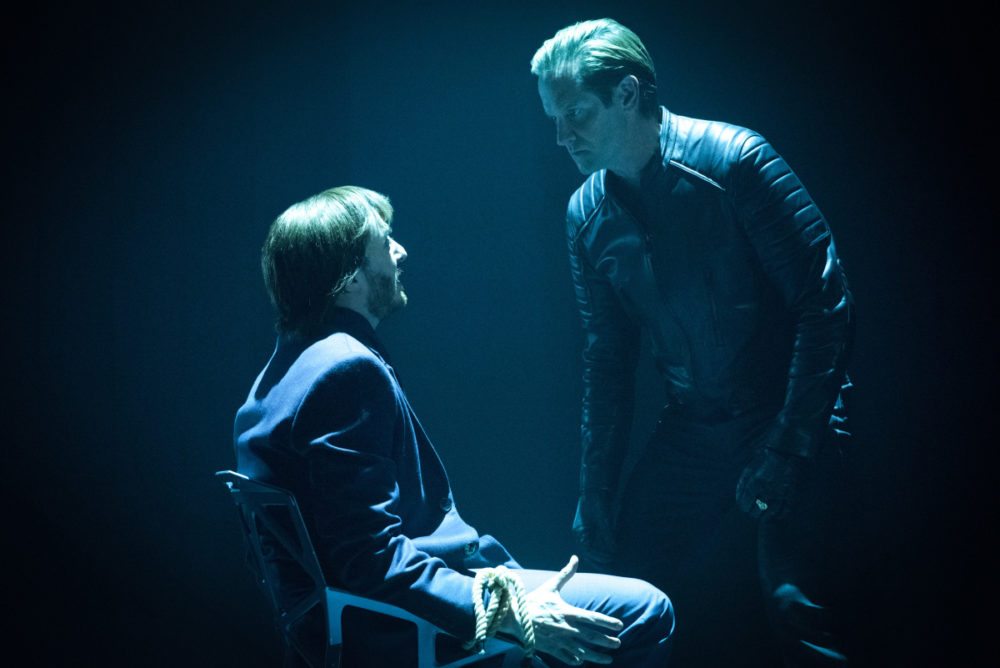 Lisa H: Guys. I’m loving that they’re flipping the script if you will. Story from the POV of the Legion of Doom? Love it!

Joey: Is it wrong that I like the Legion of Doom better than the heroes?

Corrina: I like Barrowman but I get tired of reusing the same villains over and over.

Joey:  I agree with that, but I like this merry band of villains better than the mopey band of heroes.

Joey: I think it goes back to the discussions we’ve had about each of these shows having its own tone. Darhk and Merlyn interacted a lot last season on Arrow, but I didn’t care for their shared screen time then. It was too brooding. But on Legends, they get to be a little more silly. A little goofier. And I like it. It looks like they’re having a good time.

Lisa H: I agree and I think in part that is why Legends is a bit more fun. (Stay with me here.) The very concept of traveling through time to fix time aberrations lends itself to a more fun environment because every rule is on the block to be broken. The other shows are restricted by the reality they live in and can have fun and silly moments, their reality is their reality. It can’t change. Unless the Legends change it for them.

Joey: Thawne’s keeping Merlyn and Darhk under his thumb by keeping them divided, bickering, and watching their own backs from the other, right?

Corrina: It was fun watching them bicker.

Joey: I particularly enjoy how they individually went to Rip/Phil airing their complaints and misgivings about their respective situations. And Rip/Phil acting almost as their marriage counselor in getting them to stop their squabbling and turn the tables on Eobard.

Lisa H: Love the chemistry. But why is Thawne in charge?

Lisa H: Why doesn’t Lily work with Team Flash on a regular basis?

Joey: Why does Lily carry a Geiger counter in her purse?

Corrina: Well…um…she’s a science geek? She’s cut from the same mold as Caitlin.

Joey: Why don’t they go ask Barry who the speedster is?

Joey:  Seriously. Stein and Jax went to Central City 2017 to get Lily. No one thought to stop by STAR Labs and get the team there’s input (instead of just hanging around the Waverider trying to noodle it out on their own)?

Lisa H: It’s a plot hole the size of a Mac truck.

Joey: So they rewrite Rip into a time traveling assassin? Why can’t the other three DC/CW shows be this much fun?

Corrina: Too much angst over romantic triangles.

Lisa H: Wait are we not going to talk a little Rip shooting George Washington??

Bottom Line: Certainly the most fun episode of the four shows this week, which seems to be the niche that the writers and production team at Legends have carved for themselves. While we only hinted on it there at the end of the above recap, seeing Arthur Darvill playing a different version of Rip/Phil, and from the tease of the reprogrammed version of Rip, is a thrill as well. Might be the best episode overall this week, if it wasn’t for Arrow giving them a run for that that title this week… 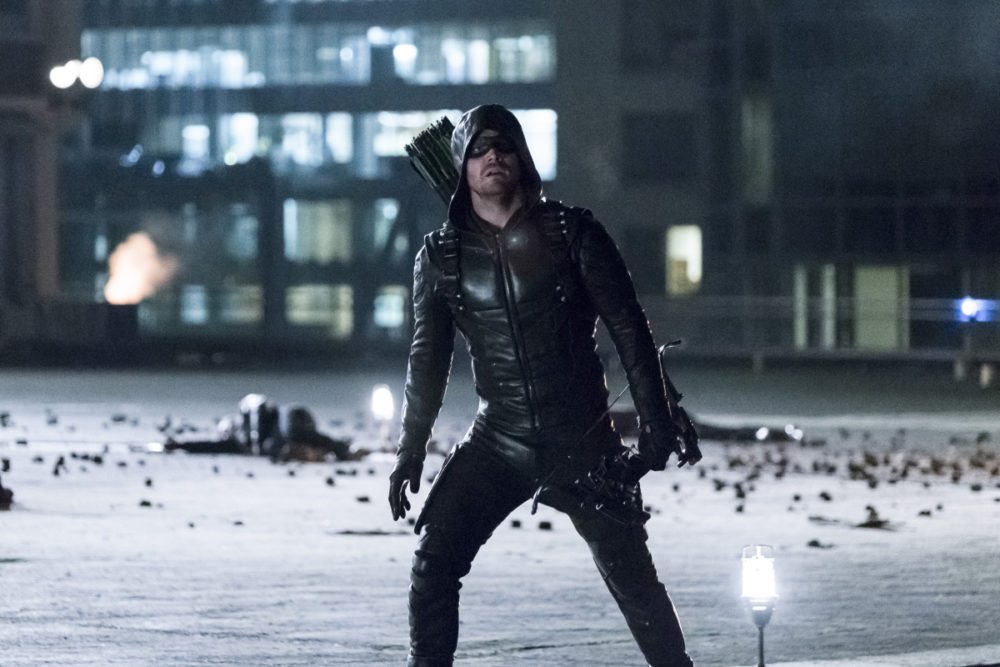 Arrow, Episode 5.11, “Second Chances”
Joey: Singh and Barry? Nice again. All three Earth-1 shows have made a stop in Central City this week.

Joey: See, when Ollie need help in Central City, he texts Barry. The crew of the Waverider needs to be paying attention.

Lisa H: I really like the little reminders of how these four shows are one universe. More of that please.

Lisa H: Ummm… so Wild Dog’s power is shooting a gun and having a crappy costume? Can we vote him out?

Joey: And, apparently, he has a gut of steel in order to put away a Big Belly five-stack.

Lisa H: Yea what was that?? Other than a bad attempt at character development.

Lisa H: But did it really ever go away??

Joey: Anyone else have a bad feeling about Felicity just sticking an unknown flash drive in the ArrowCave computer?

Lisa H: So it wasn’t just me that thought Winifred Burkle is nefarious?

Joey: Talia trained Yao Fei! Nice callback. Wow, Talia’s bringing the entire series full circle. I’m excited, and it’s been a while since Arrow has made me say that.

Lisa H: Yes. That was nice.

Joey: Going to go out on a limb here and say that Prometheus is Talia.

Lisa H: I can’t decide if I like it or it’s too on the nose.

Bottom Line: I’ve said it before that I have been this close to dropping Arrow from my weekly TV viewing. That feeling really started with the season three winter cliffhanger, where Ras’ al Ghul “killed” Oliver. That was the moment that started to turn me away from Arrow. We all knew that they weren’t going to actually kill the title character and make it stick. From there, the series has sank lower and lower in my esteem. This week’s episode signaled a change. A return to the series’ roots. A chance to grow with Ollie’s “second chance”. Expanding and changing roles for the extended team (I particularly like the idea of Curtis as “the guy in the van” for this team). For the first time in a long time, I’m looking forward to the next episode of Arrow. Let’s hope they don’t squander that!

Join us this week on the GeekDad Facebook page as we discuss the newest episodes Supergirl, The Flash, Legends of Tomorrow, and Arrow. The post for each episode will go live two hours before the episode airs on the east coast. React while you watch the shows live. Reply to the discussions in the days that follow. We are looking to add the most unique, funniest, and most thought-provoking comments to our weekly recaps. Jump into the discussion on Facebook and check back next week to see if your comments made our weekly recap!