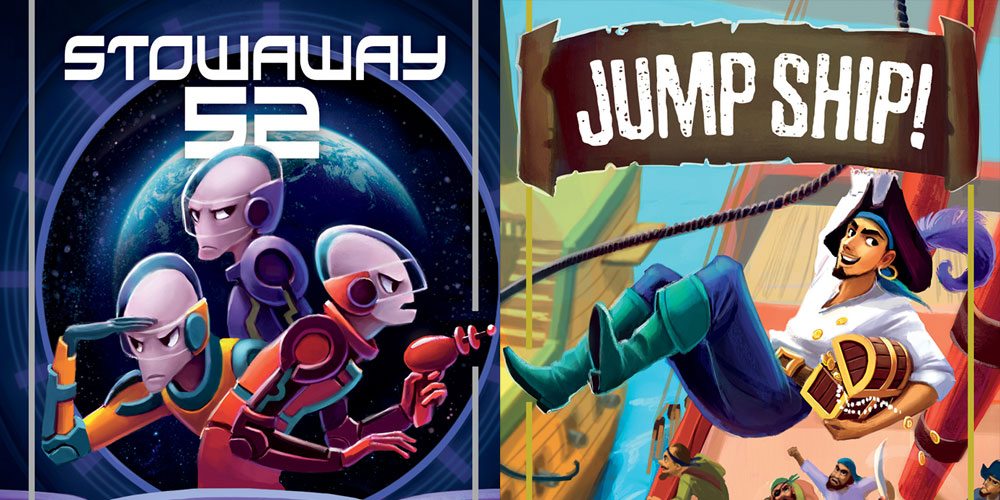 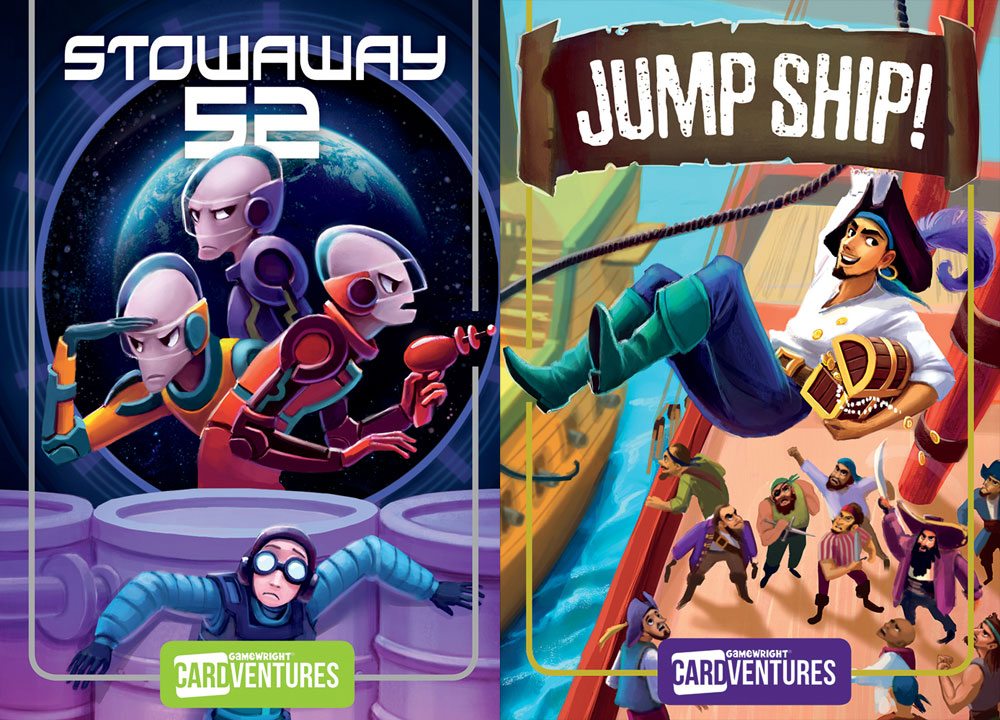 Gamewright, known for its great line of family games, has a line of interactive story games called Cardventures, which are a little bit like a choose-your-own-path story but in a new format. I received review copies of the first two in the series, Stowaway 52 and Jump Ship!

At a glance: Cardventures are story-based games for 1 or more players, ages 8 and up, and take about 15 minutes to play. They retail for $9.99 each and are available online or in stores. (Gamewright games are available in many retail stores, including places like Target and Barnes & Noble.) The stories in the Cardventures are written to be kid-friendly, so I think even younger kids would be fine playing them, though they may need help with the rules at first or with reading. Although the box says “1+ players,” it’s really more of a solo game, though you can allow more people to read it together and make decisions together.

Each of the Cardventures comes in a little slipcase-style box, with a deck of cards that are larger than standard poker cards but not as big as tarot cards. The game rules are also printed on cards. Stowaway 52 comes with 56 cards and 4 rules cards, and Jump Ship! comes with 57 cards and 3 rules cards. (It is a little odd to me that Stowaway 52 has 56 cards and not 52…)

The cards themselves are pretty sturdy and have a smooth finish, but I did find them a little hard to handle because they tend to stick to each other a little and they’re really stiff, so when you’re thumbing through a stack of them you often have to flip through them one at a time because they don’t fan easily. Each of these games has multiple “decks” with different card backs, and each card has an index number in the top left corner. Most of the cards consist of a little bit of text, with two choices at the bottom that refer you to other cards.

The cards have a decorative background—a pirate ship for Jump Ship! and a sort of circuit board for Stowaway 52—but not a lot of artwork otherwise. There are a couple cards here and there that have additional illustrations, but for the most part it’s just text. I do wish there were a few more illustrations, though, because I do like Melissa Manwill’s illustration style and I think it would add to the theme a bit.

I did notice that some of the card backs were inconsistent with slight color variations. For the most part, it won’t matter because you’re looking for a specific card. But there are some situations where you’re instructed to draw a random card from a particular deck, and if you happen to remember that the one you’re looking for has a lighter back, then this does change up the odds a little, and I was a little surprised to see that from Gamewright.

Each of the two Cardventures games plays slightly differently, but the basic gist is the same: you progress by reading a card, choosing an option at the bottom and then finding the right card corresponding to your choice. Each game has several different-colored decks, so that you don’t have to flip through the entire 50+ cards, but instead just find the right deck and look for the matching number.

In Stowaway 52, by Floyd Pretz, you’ve snuck aboard an alien ship that’s planning to attack Earth, and it’s up to you to stop them. There are four decks of cards, and you get to start with any random card drawn from the deck of your choice. Generally, you’ll put all of the cards you’ve read into one story pile, but there are a few cards with items on them (clearly marked “Item”) that you set to the side, because sometimes a choice involves using an item, and you can only take that choice if you’ve already acquired the item.

The one thing about the item cards is that the “Item” marking is just below the card’s number, so when you’re flipping through the decks they tend to stand out. I think it may have been better to put the “Item” marking on the right side of the card, so that it’s harder to “cheat” and figure out the item cards ahead of time. Each card also has a number on the top right, in a star—these are your points at the end of the game.

The game ends if you are directed to a card but it’s not available because it’s already in your story pile or items pile. Then, you add up all the stars you’ve acquired and check your score against the Story Ending cards, where you will get one of six possible endings. The only happy ending, however, is if you score a perfect 300 points by finding the right path through all 56 cards.

In Jump Ship!, by Matthew A. Cohen, you are the captain of the Black Bounty, and you’re taking advantage of the fact that several other pirate ships happen to be docked in Bedlam Bay to grab some loot before you retire to Mermaid Beach. You start this game by picking a random card from the Black Bounty deck, and then following the prompts. Most of the time, you’ll be directed to specific cards, but sometimes you’ll be instructed to draw a random card from a deck. In particular, if you ever make a choice that sends you to the Deep End, you draw a card at random and take your chances!

In this game, some cards have small gold coins or dolphin icons in the top right—these cards are placed in a separate “treasure pile” after you resolve them. As with Stowaway 52, the game ends if you need to choose a card that is no longer available (which means you go overboard), or if you get a card that sends you to Mermaid Beach. If you do go overboard, you may optionally discard a card with a dolphin on it from your treasure pile to return to the Black Bounty, drawing a random card from that deck to continue. Once your journey is over, you add up all the gold coins in your treasure pile and compare them to the Mermaid Beach score chart to see how you did.

This one also has a treasure hunt—hidden in the cards are references to 6 other Gamewright titles. If you find them all, you can send your answers to the address to enter a drawing for a free game. (I’m not sure how long the eligibility period is for this contest, since there isn’t a deadline listed.)

I’ve played both of the Cardventures a few times, sometimes on my own and sometimes with a little help from my daughter, who will listen to the story and then make a choice. The themes are fun, though the story can feel a little repetitive simply because of the nature of the game: since any given card may have multiple paths that lead to it, the story itself can’t be too specific or it may not make as much sense in the particular path you took. That said, there are some creatively written cards that take on slightly different meanings depending on what you were doing before you arrived at them.

Of the two, Jump Ship! is significantly easier. The highest score on the chart is 30 or more gold, and after playing a few times I managed to beat that score, earning the “Pirate-in-Chief” title. But Stowaway 52 is a bigger challenge. The first few times I played, I didn’t beat 99 points, which meant I was still on the lowest-tier ending. While your first card is randomly drawn, I think to some extent you have to play a few times and start to remember your path through the ship. I bet it would even be a challenge to get all 56 cards in order even if I had them all face up and could peek ahead at the outcomes. I also liked the sci-fi theme of Stowaway 52 a little better than the pirates in Jump Ship!, but that’s more a matter of personal taste.

When I was a kid and reading Choose Your Own Adventure stories, I tried to reach as many possible endings as possible, backtracking and choosing a different page if I reached an end. In these games, there aren’t as many specific “end” cards because you just end if you ever choose a card you’ve already been to, so it works a little differently. It’s a fun concept, turning the book into decks of cards, but I don’t know how many times I’d want to read the same story. My kids, though, tend to read things they like over and over again, so they’d get more value out of a deck.

If your kids like Choose Your Own Adventure–type stories or you think they might enjoy a solo game (or a game that you “read” with them), check out the Cardventures series. The stories are more geared toward kids, so they may not be as great for an adult who’s looking for solo games, but Stowaway 52 would at least provide an interesting puzzle if you want to piece together the winning path.

Disclosure: I received review copies of both Cardventures games. 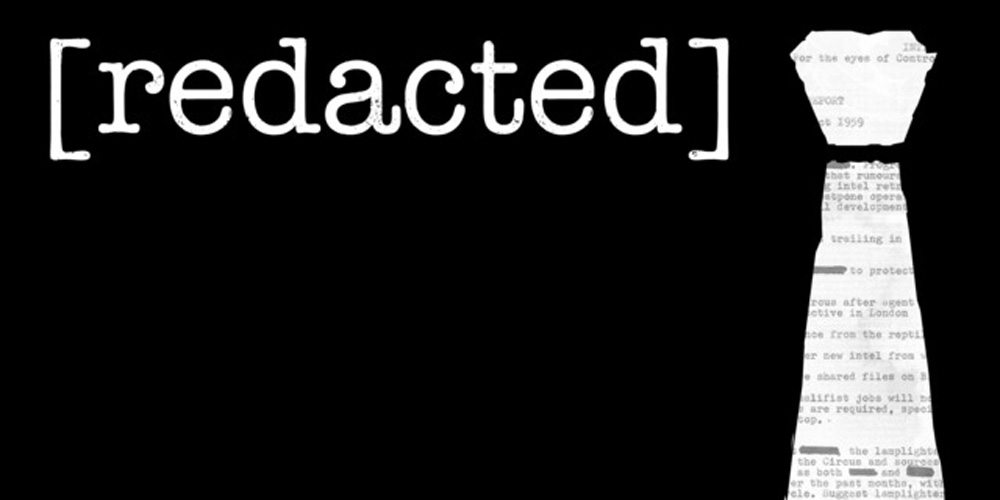