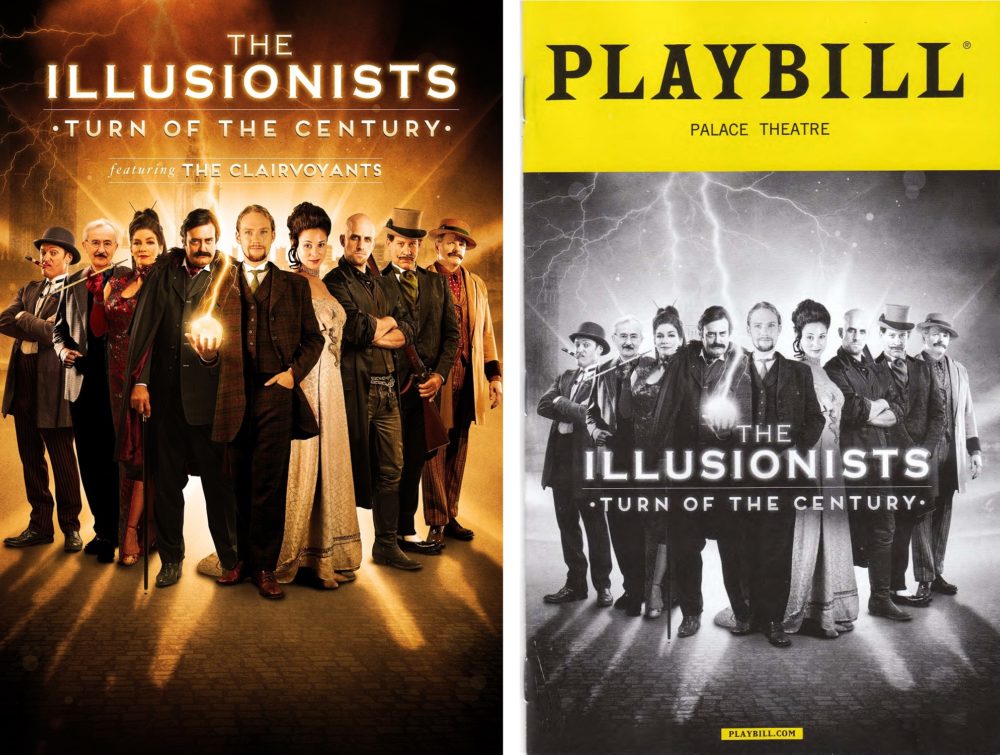 A bit of background: my kids (like all kids) cycle through various obsessions. One of their current obsessions is a National Geographic show they found on Netflix called Brain Games. The show highlights all of the ways we can trick our brains into believing what we see even when it contradicts what we actually know to be true.

One of the recurring hosts on the show calls himself a “deception specialist,” so of course that’s exactly what my daughter wants to be when she grows up. We’ve tried telling her that it’s not a real career (unless you’re a thief), but she’s hearing none of it.

She’s fascinated by magic, illusions, sleight of hand, and people who specialize in deception. So it was with great anticipation that we checked out this year’s version of The Illusionists show on Broadway. 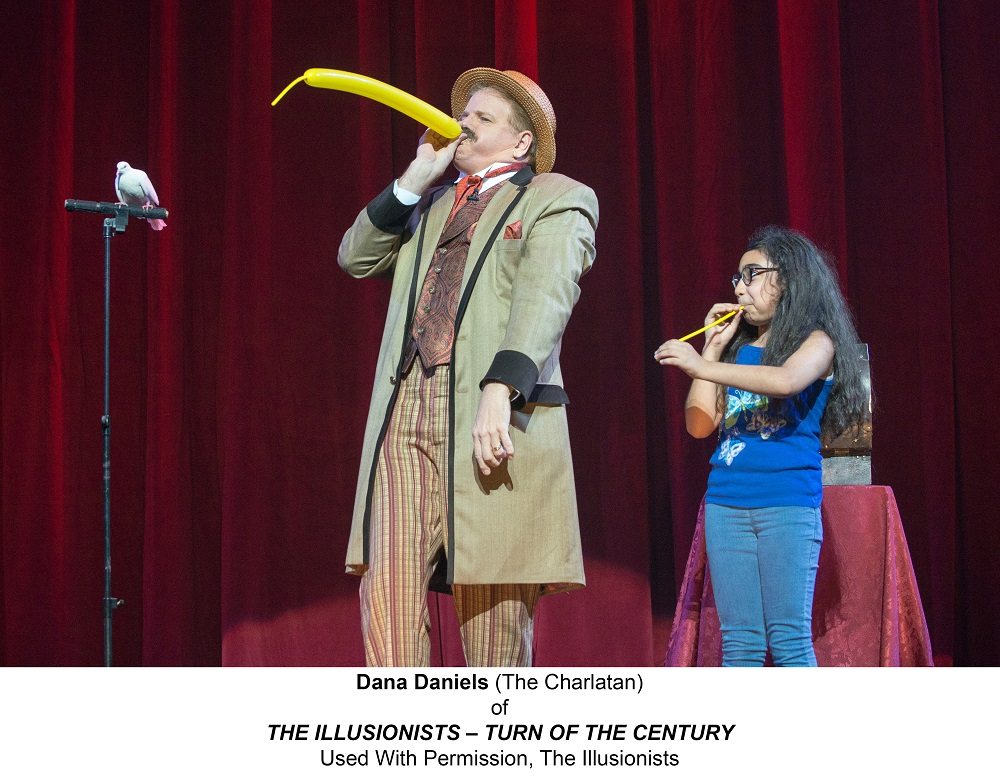 This year’s show, which is back for a limited run during the holiday season, is its third incarnation. The Illusionists: Turn of the Century transports audiences back to “the golden age of magic” (i.e., the turn of the century) and infuses everything with a bit of 1900s style…along with a hint of steampunk.

Let’s get something out of the way right now: The Illusionists is not a mind-blowing magical extravaganza. Do not expect Vegas-style theatrics or mindbending feats of magic that will leave you scratching your head for days. In short, no one’s making the Statue of Liberty appear on stage or opening a portal to another dimension.

And that’s kind of the point. The turn-of-the-century conceit is intended to celebrate “the spectacles that transformed stage entertainment over 100 years ago with a cast of world famous magicians playing incredible characters, each of whom embodies a magical great of the past.”

As you might guess from its name, the show features tricks of illusion and sleight of hand. And if you go into it with expectations tempered and in check, you’ll be thoroughly entertained and enthralled by the ridiculously talented performers on stage. 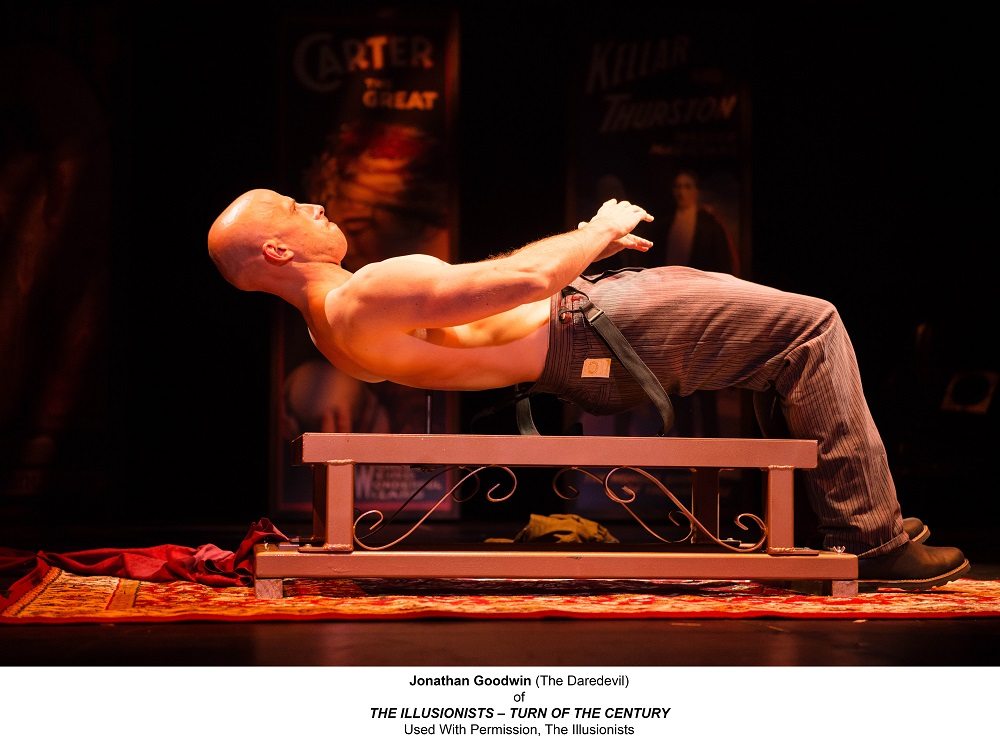 The mostly family-friendly show (it includes a fair bit of off-color humor) includes a nice variety of acts and should keep everyone fully engaged for its two-hour run time. And almost every act incorporates audience volunteers in some way. It’s one of the most interactive stage shows I’ve ever seen.

Acts include magical comedy; card tricks; death-defying acts of escape (and pain management); “mentalism”; and vaudeville comedy, juggling, and acrobatics (courtesy of Charlie Frye – The Eccentric – with routines that would feel at home in Cirque du Soleil).

Of course, reliable standbys such as sawing a woman in half and making the attractive assistant disappear into thin air are also included.

Of all of the performers, the duo known as The Clairvoyants (Amélie van Tass and Thommy Ten) get top billing. If you watch America’s Got Talent, you may have seen them on that show. In a nutshell, their act is that Amélie can read minds and when blindfolded has the ability to identify whatever Thommy is holding…with incredible specificity. She can identify a specific shade of lipstick, the expiration date on prescription medicine, the exact brand of cell phone – basically anything she shouldn’t be able to simply guess.

Their act was impressive, but it perhaps went on too long. Their multiple appearances on stage took time away from the other, more visually compelling performances. And as a result, their act lost a bit of credibility because they kept trying to “one up” themselves. Amélie is obviously getting the information somehow (unless you believe in real magic or mentalism), so reciting the entire serial number off a $10 bill from an audience member’s wallet is simply straining the limits of our willingness to suspend disbelief. 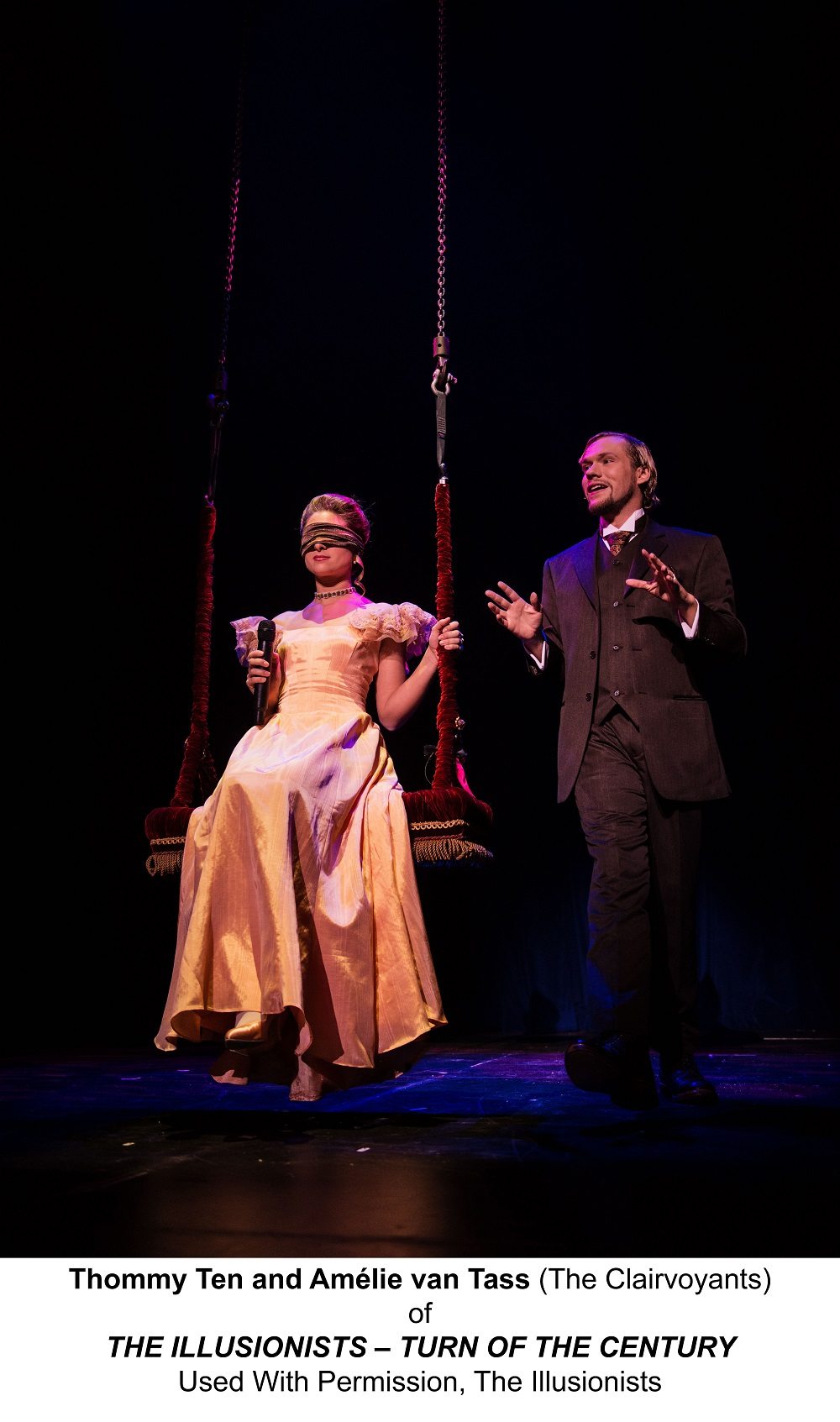 The two unexpected acts that left the biggest impression on my kids, though, were less magic and more entertainment. Which just goes to show that showmanship and presence are powerful assets indeed. The Charlatan (Dana Daniels) elicited, by far, the most laughs and simply owned the stage. His tricks aren’t what might come to mind when you think of a Broadway performance, but his routine was hilarious and his interaction with the kids he brought on stage was wickedly funny.

The Grand Carlini (Spanish illusionist Justo Thaus), though, came out of left field and blew us away with a marionette. Yes – a marionette. I’ll admit to being a sucker for high-quality puppetry, so this was right up my alley.

Thaus performs his marionette in a miniature stage and essentially disappears into the act. From the audience’s perspective, the marionette has come alive on stage as Thaus manipulates the puppet to masterful effect. Performing a convincing magic trick is no simple task. Having a puppet perform one is even harder.

Kudos to Mr. Thaus for his act and providing such a pleasant surprise in the middle of the show. 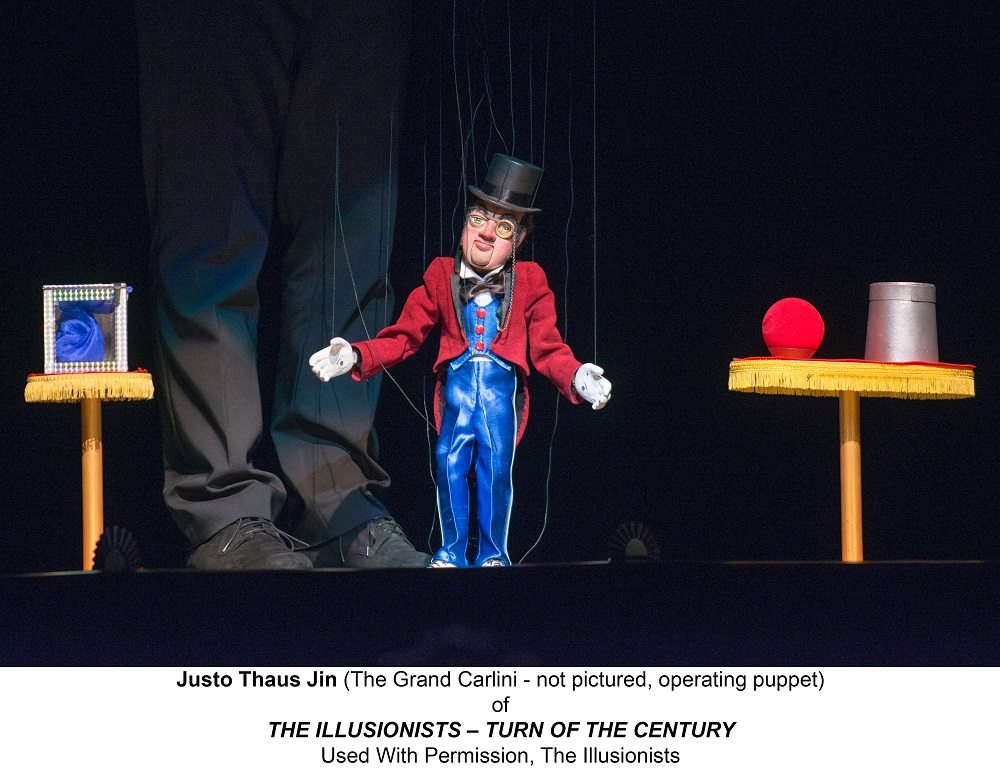 The Illusionists: Turn of the Century is currently playing at the Palace Theatre on Broadway in the heart of Times Square. If you’re a local or will be visiting the city during the month of December, be sure to add it to your list. It’s a bit of Broadway magic (I’m sorry) for those who aren’t musical fans.

Tickets are available here for the limited engagement run that ends on January 1, 2017.

(Disclosure: I was invited to a press preview of The Illusionists. All opinions remain my own.) 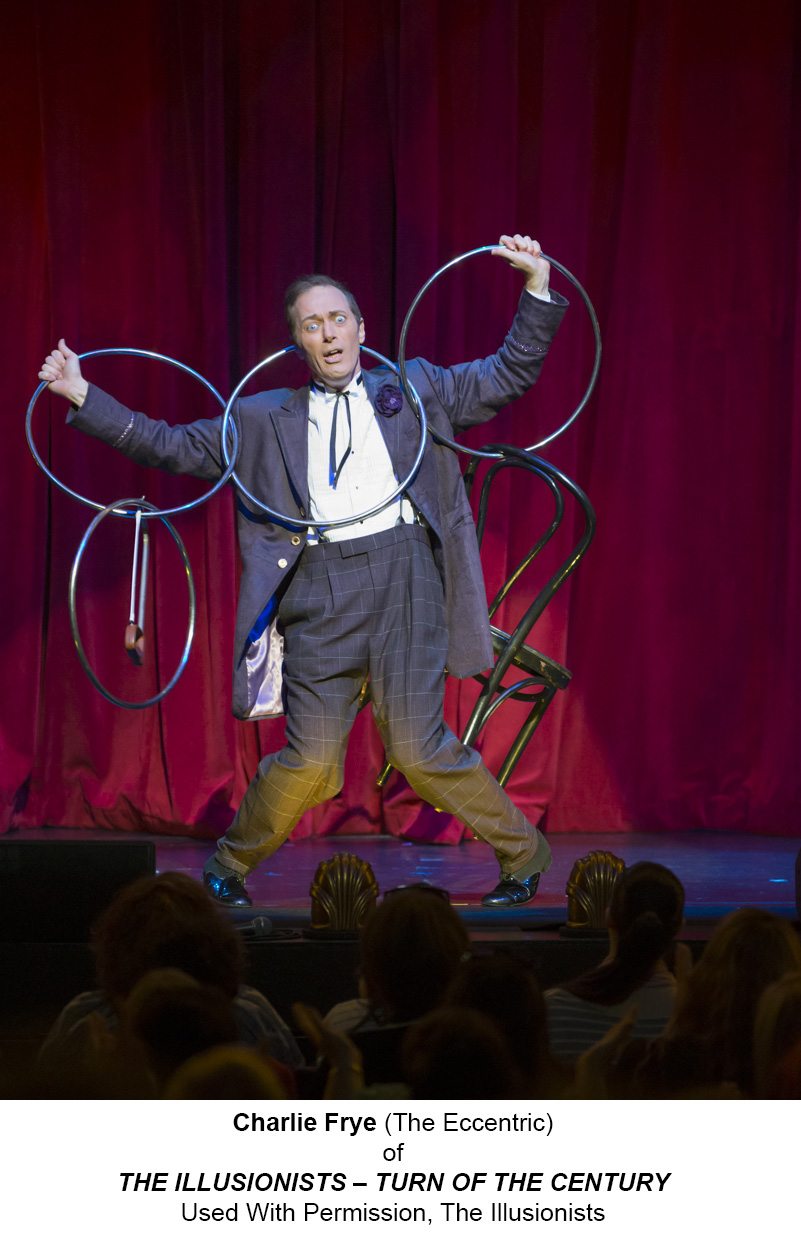 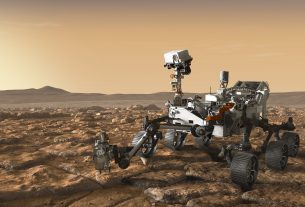