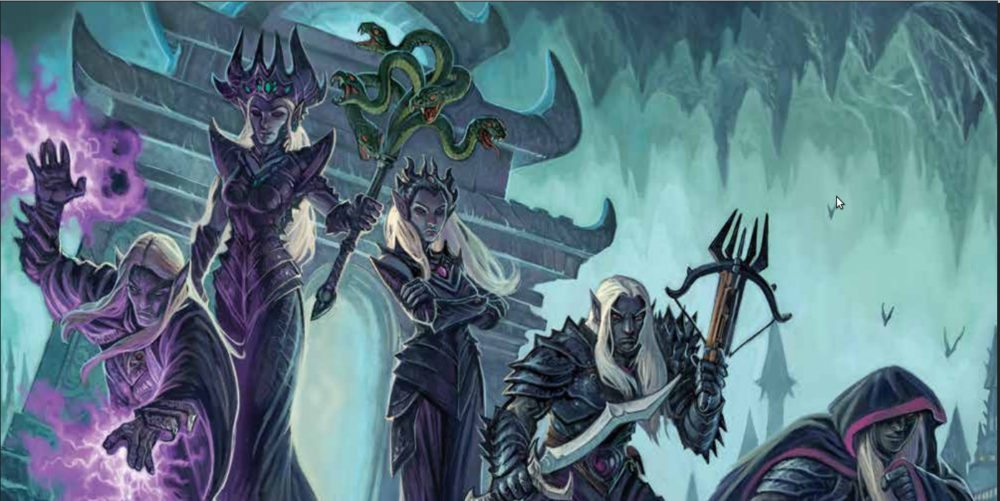 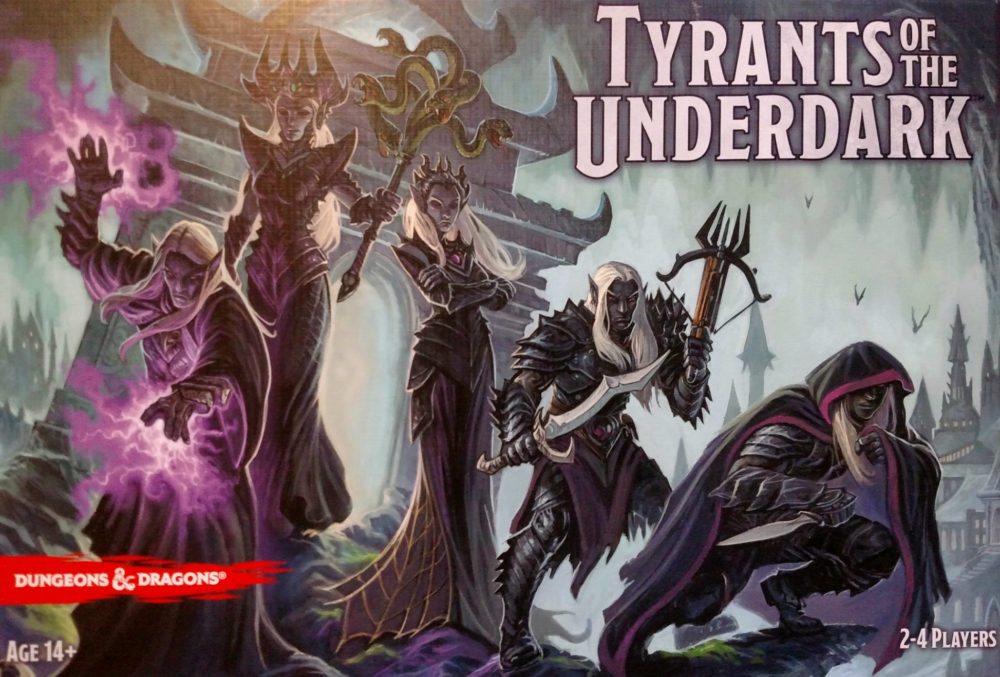 When I learned to play Dungeons & Dragons: Lords of Waterdeep at my first Gen Con in 2013, I was surprised at how quickly it got its hooks in me, and how much I enjoyed playing it. So when I heard that its creators had developed another D&D-themed strategy game, I made sure to pick up tickets to a session at this year’s Gen Con. My expectations were high – and, as it turns out, well met: produced by Gale Force Nine, Dungeons & Dragons: Tyrants of the Underdark is an easily learned, fun, and well-themed game that mixes deck building, area control, and resource management in just about equal proportions.

The game accommodates 2-4 people, each of whom assumes the role of a drow (dark elf) house leader vying for territorial control in the subterranean Underdark. In gameplay terms, you’re trying to accumulate the most Victory Points (VP), which can be earned several ways throughout the course of the game.

The playing area consists of 26 sites, connected by routes. Seven sites are more prominent – they are marked by larger circles and site control tokens – and can also provide Influence and VP during the game itself. To have control of a site is to have more troops there than any foe, including the white troops. (Doesn’t have to be a majority share: If you’ve got two red troops to one blue, one black, and one white on a site, you control it.) Total control of a site means one player occupies all of its troop spaces and there are no enemy spies there.

Dotted lines on the map indicate the playing area, depending on the number of players: A two-player game takes place in just the middle section; three players use the middle and one of the outer sections, and four players use the entire playing field.

Each player begins with 40 troops and 5 spies, and an identical 10-card deck consisting of two types of Minions. Everybody gets to place one troop on the board.The game also starts with a couple dozen white troops already on the board.These are enemy troops that represent various Underdark folk unaligned with any drow house – they’re only there for you to conquer.

You have Presence at any site where you have a spy, a troop, or a troop in a space adjacent to that site, or at any troop space where you have a troop. (Note that spies provide Presence ONLY on the site where they’re located – they don’t confer adjacent Presence the way a troop does.) You need Presence to carry out most actions on the game map, like deploying a troop, returning a troop or a spy, or assassinating an enemy troop.

The game’s two resources are Power and Influence. On each turn, you’ll spend these from the cards in your hand, or from site control markers if you have any. With Influence, you “recruit” new minions from those currently in the Market, adding new cards and abilities to your deck. You use Power to deploy new troops, assassinate enemy troops, or return an opponent’s spy to its barracks – the area control aspect of the game. You don’t have to spend all your resources each turn, but they don’t carry over to a subsequent turn.

The Market deck, from which players will add new Minion cards to their own decks, via the market, is comprised of two half-decks of Minions shuffled together. There four market half-decks included, each of which will add a different bit of flavor, in terms of both game play and theming. (More on this later)

The deck building aspect of Tyrants intrigued me from the start, since that style of game generally isn’t my strong suit – and as I result, I’m not a big deck builder fan. Turns out I really enjoy it within the context of this game’s larger, multifaceted gameplay, though.

Here’s how each player’s turn unfolds:

So on every turn, you’re balancing options based on the five cards in your hand, and your control of certain sites, which can give extra Influence. Do you want to add a couple lower-value Minions to your deck, or spend your Influence on a single, more powerful card? Use your Power to remove that enemy’s spy and retake total control of a site that will grant you VP, or add some troops that will expand your territory and Presence? You may face choices like pulling back one of your spies or discarding a card in exchange for additional resources; should you promote a card with a high Inner Circle VP value now, guaranteeing more points at the end of the game, but removing it from the ranks of your Minions?

When it comes to placing spies and deploying troops, you can only deploy troops on empty troop spaces. Spies don’t go on troop spaces – they can only be present on sites, placed on one of the outlining points of the smaller, four-sided sites or on the larger rings of the more prominent sites. Spies serve two purposes: They can be played where you have no Presence, establishing it for that site – giving you a foothold on a part of the board largely occupied by foes, for instance – and they prevent an opponent from having total control of a site, even if that opponent occupies all the troop spaces there.

The game’s final stage begins either when a player deploys their last remaining troop, or when the Market Deck is empty. From there, play proceeds until the end of the round, and then it’s time to tally the scores. Each player earns VP as follows:

Tyrants comes with paper score pads that make the process easy – our Gen Con game was scored using a larger laminated version and a dry erase marker, which I thought was a good idea. The player with the most VP wins. There are no tie-breaking rules, so it’s possible to end up with multiple winners, although I haven’t seen it happen.

Credit to designers Peter Lee, Rodney Thompson, and Andrew Veen: Like Lords of Waterdeep, Tyrants of the Underdark gameplay is straightforward and easy to understand, even as the overall game has enough moving parts to keep things interesting and unpredictable. Because there are a half-dozen ways to earn victory points, it’s easy to pursue a new strategy if something’s not working out, or jump quickly on an opportunity that may not be there the next time through your deck. It’s also difficult to really tell who’s got the lead at any given moment, because not all VP are necessarily visible at a glance. You can see, for instance, who has a pile of assassinated enemies in their trophy hall, or a stack of VP tokens earned through site control. But it’s much harder to track what cards each person has recruited into their deck or promoted into their inner circle, and site control is often in flux until the final turn of the game.

The game instructions recommend playing the game for the first time using the Drow and Dragon half-decks to form the market deck, because they offer the most straightforward deck building options. The Demons and Elemental half-decks introduce other variables in the form of Insane Outcast cards – which actually cost you VP if they’re still in your deck at the end of the game – and cards with Focus ability, which offer bonuses when paired with cards of the same aspect (see the “Parts of a Card” illustration). Being able to change the market deck composition from game to game provides variation – and, I hope, means that future game expansions could be as easy as introducing new half-decks.

The theming is top-notch: The cards’ fantastic art and the evocative flavor text are what should be expected from a licensed D&D product, and they’ll likely delight longtime D&D players, packed as they are with familiar beings and settings. I’ll admit that I found the board’s design odd at first: The stark, modern black-and-white lines & shapes didn’t immediately evoke a D&D feel the way the Lords of Waterdeep city map does. Once the game started, though, I found myself quickly drawn into the theme of the game, and imagining the actual action unfolding, and now I think the strangeness of the board layout, coupled with the excellence of the underlying art and the major site illustrations, really do fit nicely with the otherworldly atmosphere of the Underdark.

To go a bit further: When I play Lords of Waterdeep, by comparison, my brain locks onto the colors of the blocks needed to achieve goals, and I have a tough time thinking of them in thematic terms. (So, I get stuck on “I need three purples and two oranges to get this card” instead of thinking “I need three wizards and two fighters to complete this quest. Admittedly, this is on me.) I had a much easier time in Tyrants imagining sending a spy to Skulldeep, using the power of drow soldiers to to take out an enemy, or having a black dragon at my command.

In terms of design details, I like the individual player mats because they’ve got the turn instructions on them, which eases teaching and learning. The “inner circles” are  a good way to keep your promoted cards separate without requiring a larger playmat that’s less flexible when it comes to table space. (Although until you begin placing cards on them, they can look suspiciously like coasters: If you keep drinks on your gaming surface, be warned.) I do see two relatively minor design flaws: 1)  The “victory points” storage space on the market board is pretty much useless, because it’s just simpler to set those tokens in a pile off to the side instead of trying to place and keep them in the stacks necessary to fit them in that little space. And 2) While I like the feel and sculpts of the plastic Troops and Spies figures, the red and orange pieces can appear a little too close in color on a crowded board; same goes for the dark blue and black pieces.

Suggested age range for the game is 14 and up, which seems a little on the high side to me (Waterdeep is 12+), but then, I haven’t had a 13-year-old kid in >mumblemumble< years. Game time can run a couple hours if you’ve got four people and it’s anyone’s first time, but two-player competition can be done in about an hour and a half. Retail price is $74.99 – upper end for board games, maybe, but there’s a lot of content in here, and it’s definitely got repeat playability.

There’s an awful lot to like about Tyrants of the Underdark, and I highly recommend it.

Disclosure: GeekDad received a copy of this game for review. 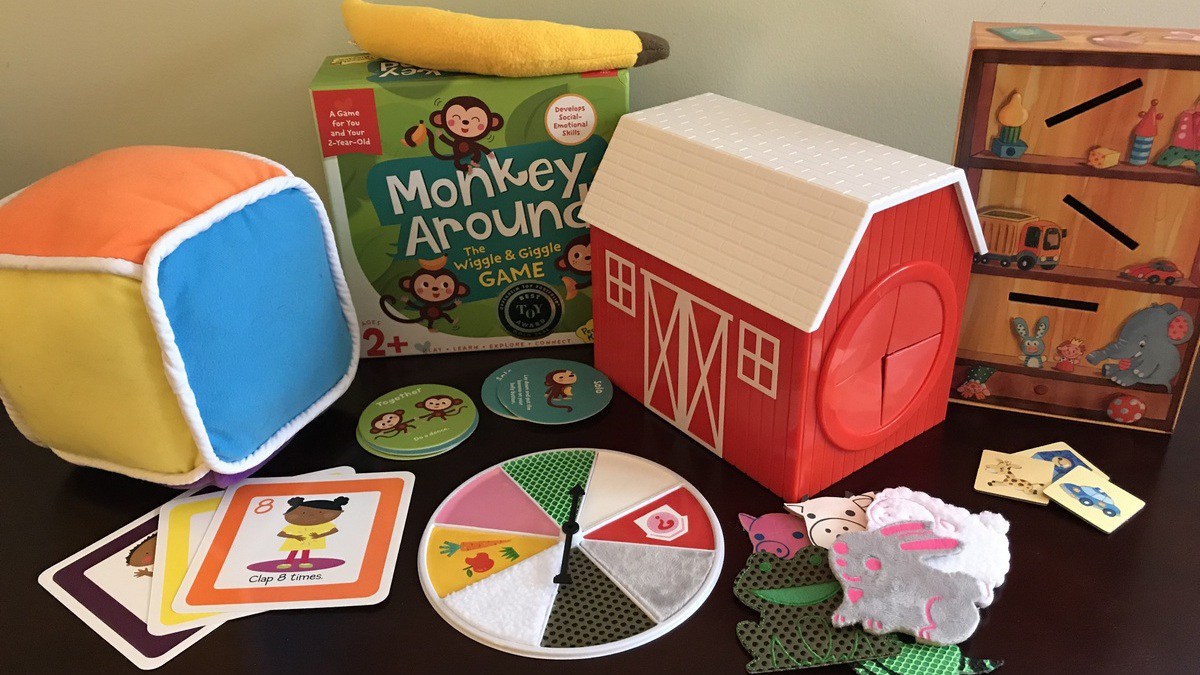 The Littlest Players: Games for You and Your Toddler 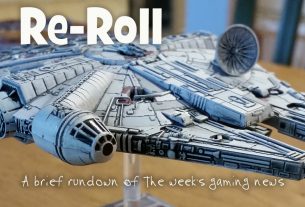 Review: Battle of the Batmobiles